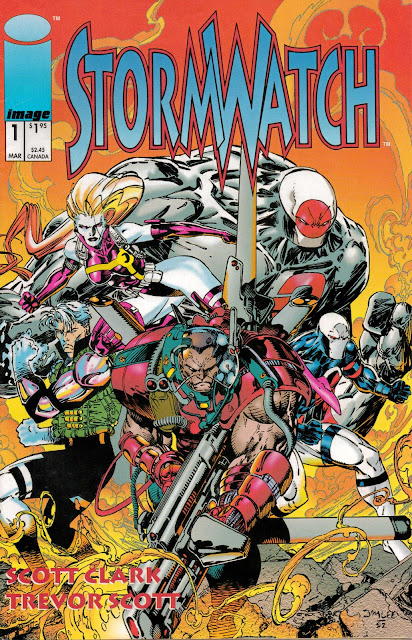 HEL... HELP ME … THE PAIN...
This week I moseyed on down (as I am wont to mosey) to my local comic shop to grab this week's fifty cent masterpiece. I ended up with Stormwatch #1.

Sometimes I wonder why I continue to write this column. Is it some sort of penance that I feel I have to do in order to justify my love of the medium? Is there some sort of masochistic streak churning through my core that drives me to flagellate myself in this manner? Am I just an eternal optimist who has faith that by keying into the entropy of existence I will somehow be rewarded? Or is it that by rooting through the broken dreams of others I somehow justify my own?

I made a commitment to keep writing this column, and so, even in the face of something as god-awful as Stormwatch #1, I shall persevere. Maybe I'm just building character?

It's March, 1993. It was in this month that fucking Whitney Houston's I Will Always Love You became the longest running number one single of all time. Teenage Mutant Ninja Turtles 3 opened in movie theaters, Bebe's Kids was released on home video, and Brandon Lee was killed during the filming of The Crow.

What a miserable month.

By the way, if I EVER hear that fucking Whitney Houston song ever again I swear I will go on a puppy killing rampage and then sue AMERICA for making this popular. It will be on ALL of your heads. You have been warned.

As if there wasn't enough shit in the atmosphere already in March, 1993, Image Comics fucking sharted out Stormwatch #1 into the world.

Now I know there are plenty of Stormwatch fans out there. Hell, DC has even included the title in their relaunch. But seriously, this is 1993 Stormwatch. Say what you will about what happens to the team in the future, but their birth was a seriously exploded placenta and vaginal dischargedcovered stillbirth. 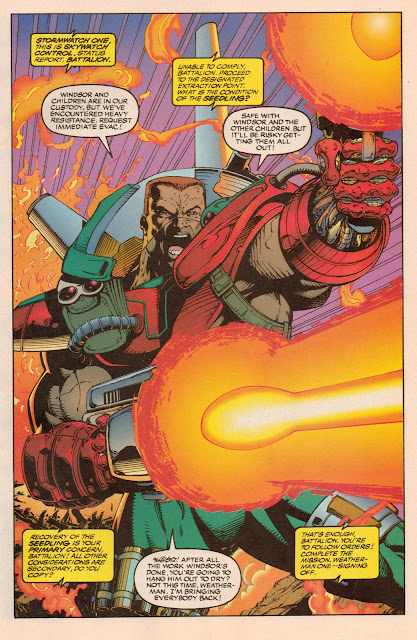 So there's this rather dramatic opening splashpage full of all those fucking thin black lines that had to cover everything in comic books in the 90's. There's Battalion blasting away in Sarajevo, killing people all over the place in the name of saving U.N. Envoy John Windsor and a bunch of children.

The next page is a double splash where we get to meet the rest of the team and see some of the soldiers they are killing. 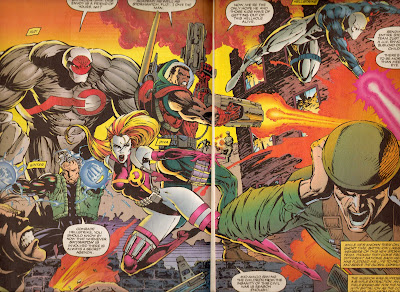 This is the first of many pose-off's that occur in this comic. What was it about this decade that made artists like Scott Clark feel the need to constantly put the characters in these outlandish positions? Was it a reflection of the narcissism of the decade. Was Madonna more prescient then anyone ever gave her credit for when she released Vogue at the start of this horrific decade? Just look at Winter in the art above. Who stands like that?

Anyway... blast, blast, kill, kill.... Then the bad guys show up for their pose. 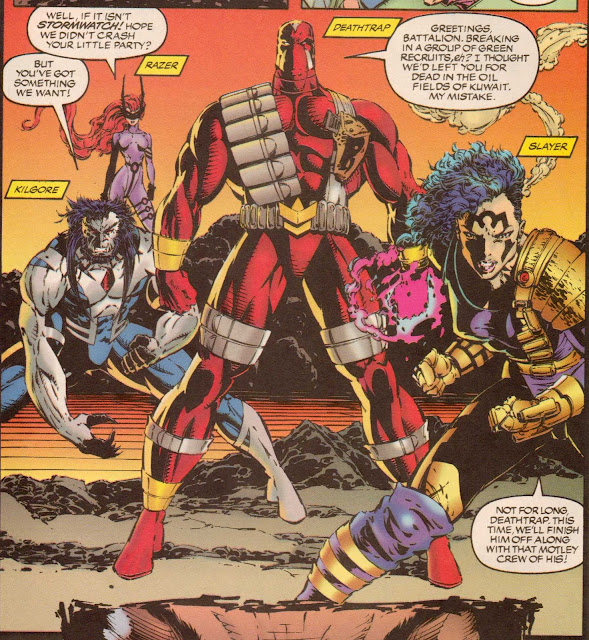 Which the Stormwatch team sees as a challenge, I guess, so they strike a new pose. 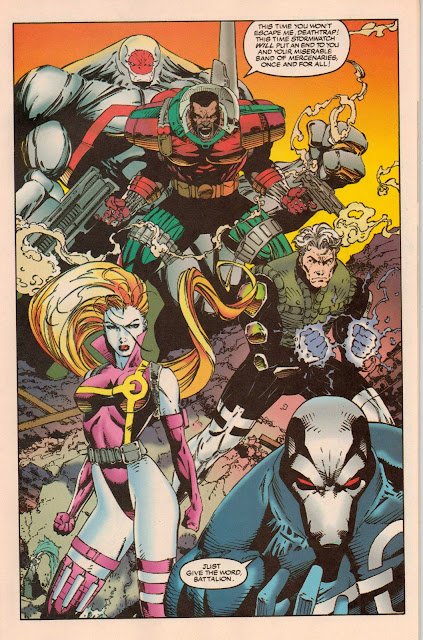 Stormwatch and the Mercs fight over posing rights or something. Stormwatch defeats the Mercs, but at the cost of the life of U.N. Envoy John Windsor, who was a friend of Battalion . This fucks up Battalion and gives him nightmares. I know this since the comic suddenly jumps to Battalion's apartment in Manhattan two days later and he is sitting up in his bed screaming “Noooooo!”

Battalion has not only been woken up by his nightmares, but also by the fact that there are police at his door. Freakishly muscle bound, Battalion marches to the door, only to find this waiting for him on the other side: 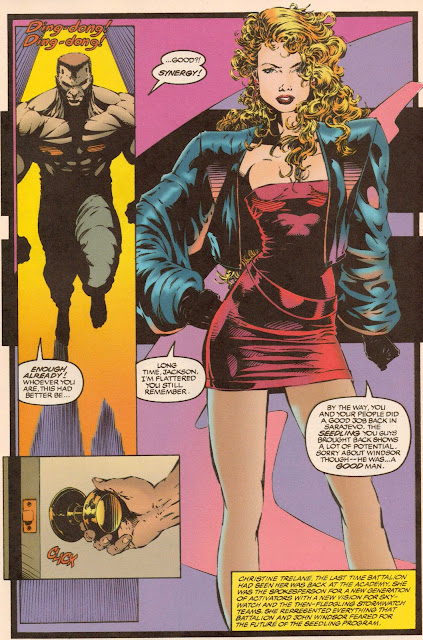 Did women actually wear outfits like this in the 90's? Did their arms hang down to their knees like this? Did they feel the need to pose with one arm akimbo while delivering platitudes of condolence?

There has been an awful lot of discussion lately about the depiction of women in comics. I am certainly no authority on this topic, but come on.... look at this shit. I would love to hear what Brandon Choi, Scott Clark, and especially Jim Lee had to say about why they chose to depict Synergy the way they did on this page. I assume there was a thought process behind it. I would just like to hear what it was.

Synergy is at the door with Battalion's brother, Malcolm, who has been arrested earlier in the evening for breaking and entering and accidentally shooting one of his accomplices in the chest, killing him. Because Battalion is a member of Stormwatch, though, his whole family has diplomatic immunity which means the police can't do anything with Malcolm.

I think this whole bit is supposed to provide some sort of character development for Malcolm and Battalion, but honestly the whole thing is such crap that all it does is annoy me even further. I mean, diplomatic immunity? That's what they come up with?

Then there's some more shit about Skywatch and Weatherman One that serves no purpose in the narrative of this issue, but is probably important to know if you wanted to read more of the series. I don't at this point, so fuck it.

The comic then jumps to U.N. Envoy John Windsor's funeral where Synergy and Battalion have a conversation about his leaving Stormwatch.

The bad guys take the funeral as an opportunity for payback and posing. 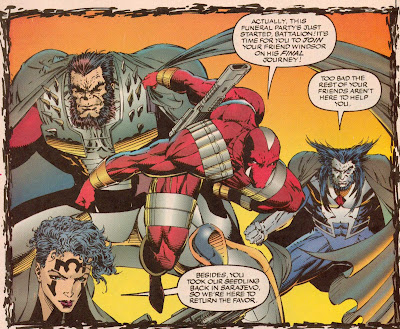 There's fighting. There's bullshit dialogue. There's more of those black lines covering everything. And then one of the Mercs shoots Malcolm.

On the ground, steaming, Malcolm echoes my exact sentiments after having read this far into this comic. 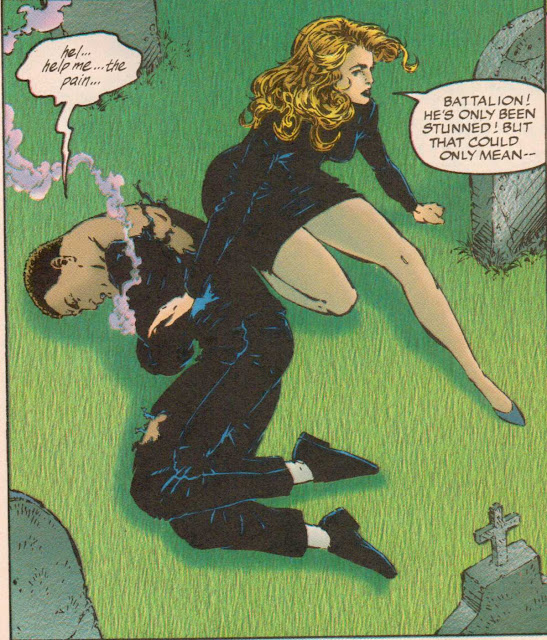 There's been this whole subplot (or maybe it's the main plot, who knows) about capturing Seedlings. It turns out that Malcolm is one of them, which gives Synergy the opportunity to suddenly break out in a sweat covered grimace and touch Malcolm's face. 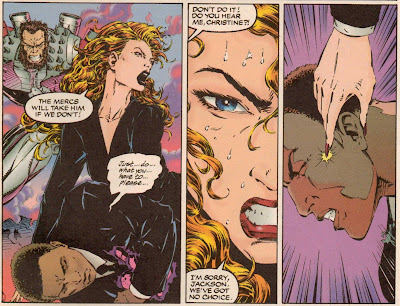 Her fingernail to his cheekbone “activates” him somehow. The act of “activating” Malcolm means this: 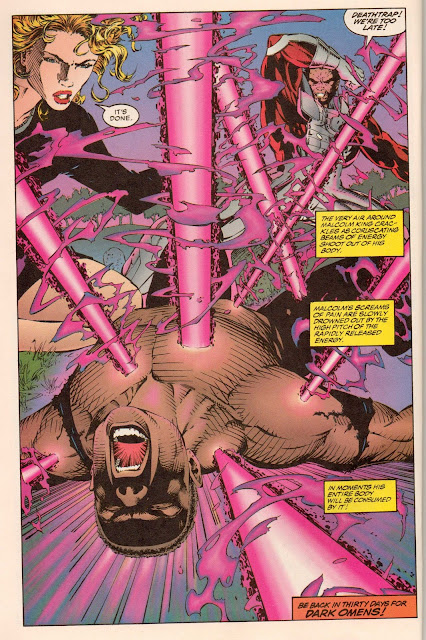 It also means that this comic is over.

I don't know. Maybe I'm being too harsh. I'm sure that if I was in the right frame of mind I might be able to find some redeeming features to Stormwatch #1, but right now I just can't do it. I found the comic just plain offensive to my sensibilities both in terms of art and story. It felt formulaic, it relied on lazy story telling, it seemed more like a showcase for bad art than an actual piece of entertainment, and it just reeked of profit mongering – pretty much everything that turned me against comics in the 90's.

And with so much else going on in the world now, and so many, many better comics out there to read, I'm just downright pissed that I even spent 15 minutes of my life immersed in this book, let alone all the time I've now devoted to writing about it.

All of this brings me back to my original questions. Why the hell am I doing this? Why even try to draw attention to comics this awful? Maybe, other than having some sort of martyr complex, I am trying to serve a purpose.

Because comics can be these things. They can be inspirational, they can point to our human condition in both a celebratory and condemning fashion, they can make you think about your world, yourself, and your society. Comic can be important.

So, ultimately, as much as I would like to smack each of you on the back of the head hard for putting this wet brown bag of a comic out, thank you Brandon Choi, Jim Lee, and Scott Clark for doing it. Your garbage has made me grapple with myself, answer some questions, give me some purpose,, and, through that, I hope to have inspired others.

Comics Can Be Important (even for 50 cents).