Poets You Should Know -- BOB HEMAN 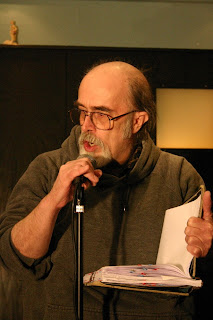 Bob Heman's prose poems have appeared in Sentence, Quick Fiction, Paragraph, Caliban, The Prose Poem: An International Journal, First Intensity and Lost and Found Times, and online at Otoliths, Mad Hatters' Review, Clockwise Cat and Action, Yes. They have been translated into Arabic, Spanish and Hungarian. Two of his collections are available as free downloads from the Quale Press. He lives in Brooklyn (New York City) where in the late 1970s he was an artist-in-residence at The Brooklyn Museum. He has edited CLWN WR (formerly Clown War) since 1971.

You will enjoy his poems.

THIS TIME
This time the hand is made of clouds. The sky is a huge animal whose breathing has stopped. the climbers when they arrive are composed of different colors. One of them has forgotten to attach his lifeline. He is the only one who does not fall. He is constructed from a system made of hesitations. Each time he tries to speak, a different pause emerges to smother his incentive. The hesitations are named after the settlements the river never returned.