Poets You Should Know -- CHRIS BUCKLEY 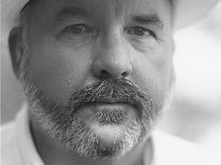 He’s the recipient of a Guggenheim Fellowship (2007-08), two National Endowment for the Arts grants, a Fulbright award, and four Pushcart Prizes, among other honors. Most recently, he was awarded the 2009 Tampa Review Prize for Poetry for his manuscript Rolling the Bones.

"Chris Buckley is an energizing, humanistic poet whose talent for capturing human drama in cosmic terms doesn't prevent him from looking closely at our day-to-day doings and celebrating them," said Stephen Gutierrez, professor of English and event organizer. "He's got a big heart, a wise mind, an all-encompassing sensibility. He's one of our finest poets."

Born in Lompoc, Buckley was raised in Santa Barbara and educated at St. Mary’s College (BA), San Diego State University (MA) and the University of California, Irvine (MFA). When not writing or reading, he a professor of creative writing at UC Riverside.

Christopher Buckley's ninth book of poetry, Fall From Grace, was recently published by Bk Mk Press/Univ. of Missouri, Kansas City. With Gary Young, he has just edited The Geography of Home: California and the Poetry of Place (Hey Day Books, 1999).


IGNIS FATUUS
Swamp glow of the Milky Way, platters of dust, arms coiled around
the galactic hub like fiery streamers in a black wind—unaccountable,
too many stars ever to be of use.

Aren't stars beside the point—starlight, finally, so suburban? Is it
still enough to be clever, allusive, like some minor movie star, collar of
his black jacket turned up, smoking, overlooking the harbor lights in
Denmark? Can you settle for approximations—glittering or not—with
the little you have left to offer?

And it's nothing to say that the clouds sometimes climb like roses
over the trellis of the blue. A wind insists against clusters of bottle
brush and bougainvillea—like renegade clouds, white grocery bags
scuttle along the sidewalks, up hill, suspended and darting in the alleyways. Each November galaxies of dry leaves and bracts spin away.

50 now, and never have you discussed rain so reverently ... there's
no doubt—you're going to die. This is no longer some distant city off
in the low analogical hills, a theorem you will never have to prove. The
scientists have shown that everything returns to something—dust to . ..
star dust, of course, so literal, remote, so cold.

Whatever it was I used to think I believed about reincarnation, I
have forgotten. I only remember that, for a time, art sustained some
vague apotheosis beyond our breath—Velazquez, for instance, standing
there, looking out from Las Meninas, as if he knew. When he was made
a Knight of the Court—that blood cross, that star, on his tunic, over his
heart, signified that he could move among such shining society. And his
painting, well, a brilliant means, not a source burning in and of itself.
My father believed he had been Velazquez, or perhaps the Spanish
king who hired him. He must have missed those portraits in the background, hazy, fading in the mirror. And later, how could he have overlooked Christ foreshortened by Mantegna—the grey sticks of his feetpoking out the canvas at us? Or Caravaggio—prescient as light—his
own head hung in the hand of David, offered to the dark—at 32, his
own tired, moon-dead eyes?

So how is the spirit grounded, ground down to stellar gravel or
settled dust? The wind moves through the oat grass, the star thistle, its
purple heart, its silver points, its pain. Pythagoras proclaimed everything could be solved by numbers. By conforming to the arithmetic of the stars, we could escape the cycle of rebirth—the universe just an algorithm of notes, monochord, string and riffs of light vibrating from
spirit at one bright end and blood-dull earth at the other.
In Babylon they catalogued 1,022 stars on a thin celestial globe, a
surface which equaled the boundary of heaven—rotation of moon and
stars the only dim points to show where they were heading on earth.
The world barely spinning then....

Beeswax sky, flame above the sinking edge of space . . . once I
could have been found sitting creek-side, cataracts sending up a mist
burning at the edge of dawn, content tossing pebbles in a pool, all the
time in the world in the relay of ripples.... Yet, when I think about it, I
never saw angels sauntering through the foothills with timpani or
flutes, no one playing "Holiday for Strings"—only the blue rondo of
water falling through water, no annotations in the paraffin sky.

The closest I ever came was at 15, surfing Miramar Point on a
head-high swell. Salt water and blood rumbling with the breakers,
crouched in a glassy tube, cutting back across the lip of the wave to
stall and shoot through the curl again for the synergy of atoms and
flying space—which is surely the singular reason I was there, though I
could not have said it then as I calmly released myself to the cold seconds burning by, to that point where I felt the electron click of blue and yellow light at my fingertips flash out above the salt static and the froth, to burst clear, breathing where light was my only future, and not all that far removed.