Poets You Should Know -- DAVID GREENSLADE 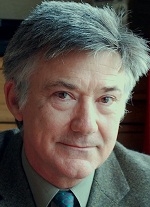 David Greenslade is from Cefn Cribbwr near Porthcawl. He has been described as a 'genuinely original voice', a 'radical nonconformist', 'avant garde' and 'relentlessly modern'. As well as teaching and travelling in the Middle East, David spent three years in Japan and four years in the United States.


SPEAK UP
When a man does the shopping he makes a few mistakes. First, he buys a thousand stalks of broccoli. It was fresh, reduced and he wished he had a family to feed. Choosing bread, he pours wine across the blades of his plough. But there are bandits in the wheat and he left his rifle in the car. Buying a few slices of ham he is amazed at the purposeful faces of the women. They know where every penny goes, they also know a hoarder when they see one. He checks his trolley. Potatoes, newspaper, shoelaces, tobacco, beer and cake. Next time he'll make a list. He puts a little of the sugar back. He can't get used to it. He can hear his mother's voice advising him. She's dead so he tells her to speak up. She's giving him some bad advice. He's talking to a jar of jam. Is anybody else in there? Speak up!