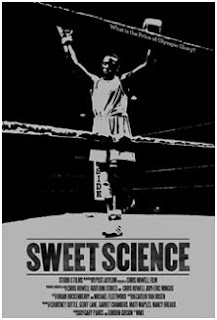 Even in the absence of a home-grown Heavyweight Champion, the sport of boxing seems to be having a resurgence in America. While this could be contributed to factors such as the fantastic global branding of the Manny Pacquiao product, or the marketing gears behind the The Super Six World Boxing Classic for Super Middleweights, the sport itself deserves its reemergence into the spotlight. For in the jabs and power punches of champions, boxing is all about the triumph of the individual in the face of tremendous opposition. And America, more than ever in recent times, needs to celebrate this. To this end comes Chris Howell's documentary Sweet Science.

Local Dallas, Texas photographer Chris Howell has spent the last eight years filming and editing the story of Greg Hatley, his sons, and the fortunes of the Oak Cliff Boxing Club as his first feature length documentary. Through Howell’s lens, Greg Hatley is simultaneously a savior-like presence for the young men of South Dallas, a driven and dedicated boxing coach, a shrewd business man, and a father living out his own dreams of glory vicariously through the fists of his sons. As the film’s focus, Greg Hatley’s story delivers a visceral, cathartic reward to the audience, and his trials and single-mindedness are at times either inspirational or heartbreaking.

The film also does an excellent job of bringing to light the world of amateur boxing. It touches briefly on some of its controversies, specifically in the computer scoring system, but mainly focuses on the opportunity that the sport provides for young men who would otherwise have a very bleak future. While the story of the film follows Greg Hatley’s hopes for his youngest son Charles, a gifted young boxer, it also looks at the lives of his other son “Rabbit”, and two otherwise lost young men, Dominic Littleton and Greg Corbin. It is in these sub-plots that so much of the emotional impact of the film resides. The stories of Littleton and Corbin, especially, are the things of great tragedy, and it is these stories particularly that frame the real journey of the movie.


For at its heart, Sweet Science is a documentary about trying to overcome adversity. It is not a film for people looking for simple answers or easy resolution. It is more “Raging Bull” than “Rocky”, but it is a film that leaves a lasting impression, a complex tale for complex times.


Howell does not intrude upon the narrative of the film, but lets his subjects play out their stories starkly in a true documentary style. Questions pop up throughout the film, such as the role, expectations, and obligations of billionaire Todd Wagner’s Foundation, but Howell does not let the focus of the film be derailed, and he lets the viewer draw his or her own conclusions, a refreshing touch in an era of heavy-handed politically savvy documentaries. Howell also does a great job of allowing juxtapositions to shine brightly on their own, particularly through the interaction between Charlie Hatley and Floyd “Money” Mayweather. There is no preaching in Sweet Science, there is only story. Howell seems to trust his audience, and, especially, his film.


Sweet Science is a story about the quest to overcome adversity. Stark and sharp, redemptive and tragic, it is a worthwhile journey. It is a film for both boxing fans and detractors alike because ultimately, it is a film about us. It also marks the beginning of what should be a very interesting film career for Chris Howell.

Sweet Science has its World Premiere at the Dallas International Film Festival - April 12th, 7pm and April 15th, 4:30pm at the Angelika Film Center. You can purchase tickets here.