Poets You Should Know -- GABE HUDSON 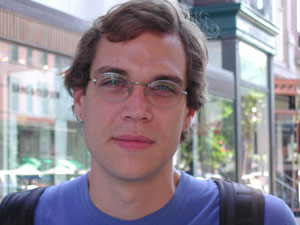 I HAD A SISTER NAMED TABLE
I had a sister named Table who never said a word to me. I thought my
pillow was a trap door into another dimension, which wasn't that weird,
because my dad had built the house and it was chock-full of trap doors.
Whenever somebody came over to the house my dog Rags would get
excited and try to finish all their sentences. Whenever I found Rags
dead on the back porch, I'd kick him and he'd come back to life. If I run
out of clean underwear I just wear my bathing suit. As a kid you pretty
much needed to have eyes in the back of your head, because given the
right circumstance, even a blade of grass could knock you off your feet.
On Saturday mornings I'd watch the color people in the fire while
my mom made me a big stack of pancakes with a side of bacon. I loved
the taste of pancakes with butter and maple syrup on them. The bacon
kept its mouth shut until my mom put it in the pan, and then it would
start singing like a bird. The bacon's singing filled up the whole house
and turned the air around my mom into pretty clouds. I'd take the songs
and put them in my head, and then when I went out and played with the
other kids in the park I would be hearing the songs. I never did
understand what the bacon was singing about because it was in a
foreign language, but the sound of it was beautiful. The sound of it was
angels.
As long as I'm around, my mom will last forever