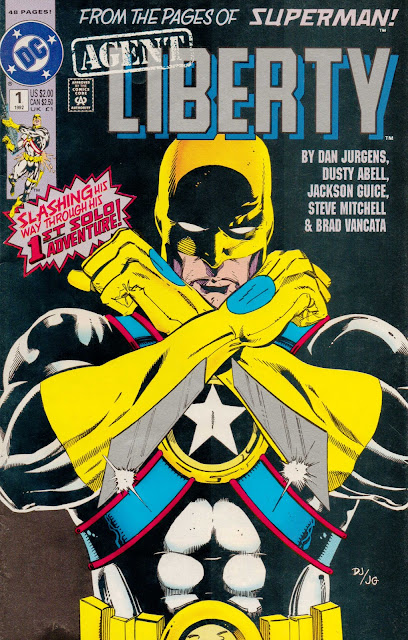 INTERFERENCE
Let's travel back to January, 1992, shall we?

For some reason, it seemed like there was a great deal of regurgitation going on then. I mean, first off, this was when President George H. W. Bush spewed all over the Prime Minister of Japan at a state dinner.

Then in January, 1992 new United Nations Secretary-General became Boutros Boutros-Ghali, whose name kind of sounds like someone vomiting, right?

Also resonating with the sound of puking at this time was the title of the latest Emilio Estevez, Anthony Hopkins, and Mick Jagger vehicle just released into theaters, Freejack.

You see where I am going with all this?

My latest random pick from the bargain bin just so happened to be Dan Jurgens' Agent Liberty #1 from DC Comics. It, too, was released in January of 1992. With all the hurling going on during this month, I thought for sure I got me another pile of hork to heave through. It has all the makings of a mess, doesn't it? It's the first issue of an early 90's Superman spinoff languishing in the bargain bin, right? Such a thing does not bode well in terms of me keeping my bile down.

So I got myself a bucket before I sat down to read Agent Liberty, fully expecting to fill it with expectorate after the first couple of pages.

But that didn't happen. A matter of fact, after reading Agent Liberty #1 my faith in comics as a medium was renewed. You can color me impressed.

So Agent Liberty #1 opens at the Pentagon. A group of heavily armed “paramilitary types” seem to be breaking in. They've lost contact with some of their scouts, and one of the team is sent to investigate. This is what he finds: 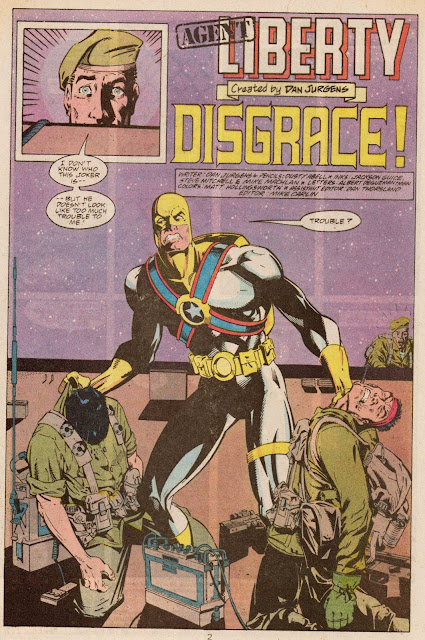 It's Agent Liberty, and he ain't chewing bubble gum.

Some broken legs and a shattered spine or two later, the “paramilitary types” realize that hand-to-hand combat against Agent Liberty may not be the best idea. So they crank up the fire power.

Agent Liberty takes this opportunity to show off some of his other skills. 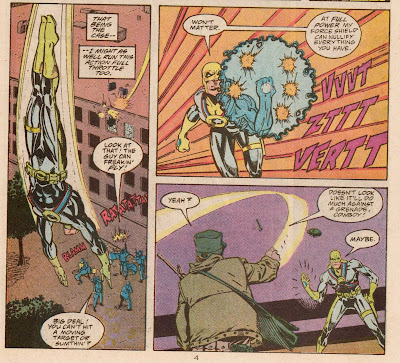 VVVT! ZTTT! VERTT!
I love it, and the dynamism of Abell's pencil work is palpable. I also want to laud big props on colorist Matt Hollingsworth for experimenting with the many hues of orange.

If you notice in the last panel above, one of the “paramilitary types” has lobbed a grenade at Agent Liberty.

Guess what he does.


BUT YOU'RE WRONG!
He does this! 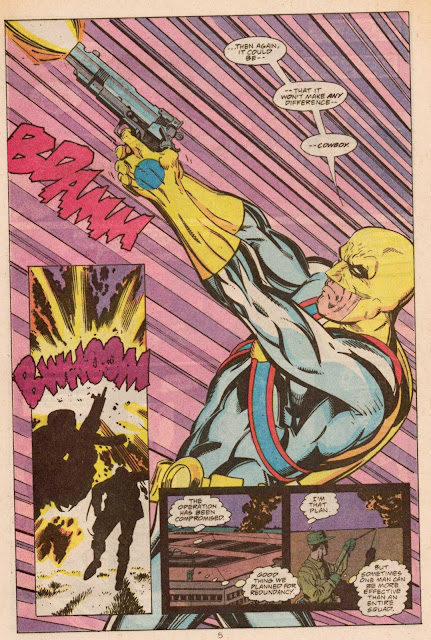 BDAMM! BWHOOM!
Oh yea. This book is becoming a serious graduate course on action packed comic book hokum fun! Who knew purple came in so many different grades? The writing is spot on, the grimace on Agent Liberty's face is perfect. Man! After slogging through Stormwatch last week, this is like a slice of cherry cheesecake made by Jesus after two bites of the Devil's own shit sandwich.

And it gets better.

The “paramilitary types” next bring an armored vehicle to the party, and with a BUDDA BUDDA BUDDA WHOOM! they almost blow off Liberty's arm. In response, Liberty grabs one of the goons with a “C'mere,” which causes the goon to ask, “What do you want ME for?” 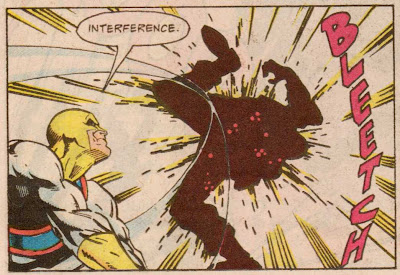 BLEETCH? Oh, Dan Jurgens – I don't care what sort of onomatopoeic dysentery you were suffering from – I LOVE YOU.

Then Liberty gets some back up in the form of an attack helicopter, and with a double FWOOSH and a fucia BADOOM! the “paramilitary types” are all mopped up. Liberty and the helicopter make a “tactical retreat” so as not to be subjected to any questioning (although this was at the Pentagon – you would think there would be more of a military presence and rapid response time – but I am NOT going to nitpick).

Agent Liberty returns to his base of operations where he is greeted by Harriman and Kramer, his bosses, who are not at all happy with what just went down. Harriman tells Liberty that there was a successful break-in after all, and someone walked out of the Pentagon with “A cassette tape with some communications regarding our Iranian Job – and a Simple, Old, Everyday Iranian map.

There is something about Iran.

The comic then proceeds to tell an incredible backstory.

In April of 1980, as a response to the kidnapping of 52 Americans held hostage in the U.S. Embassy in Tehran, Iran, then President Jimmy Carter gave the greenlight to the Delta Force led mission “Operation Eagle Claw” (called “Operation Blue Light” in the comic). This was to be a helicopter rescue mission, but ended up a debacle which resulted in the death of eight American servicemen and the loss of the helicopters (and probably costing Carter reelection).

In the world of Agent Liberty #1, prior to this mission, two CIA operatives, Devlin and Lockwood, set up the advance post in “mountains outside Tehran” running “recon missions”. They were going to be the “eyes and ears and rescue leaders” for the assault. When everything went FUBAR, Devlin and Lockwood were cut off. As Devlin says, “That means we're on our own! No more communications, no more support – no acknowledgment that we even exist!”

The two operatives had to get out of Iran on their own. To do so, they decide to go undercover into Tehran itself. While there, Devlin sees the Iranians kicking and stabbing the bodies of the dead American soliders. When he recognizes one of the bodies as his dead brother, he snaps and is summarily attacked by the frenzied Iranian crowd.

Lockwood retreats to the mountains. Dan Jurguns then writes: “Abandoned, shunned and forgotten by his country's politicians – his partner and best friend dead – Benjamin Lockwood was left alone in the most hostile country on Earth. And there was no way to get out.”

Even after Reagan was elected and the hostages were freed, Lockwood continued to be stuck in Iran. When the Iran/Iraq war broke out, Lockwood saw this as his opportunity to escape. After a fierce firefight and some brutal hand-to-hand combat, Lockwood, now “more animal than man,” was able to disguise himself as an Iraqi soldier and make his way across the border, eventually finding his way back to America.

Now that's a backstory and a hell of a history lesson. It also brings us to the present of the comic.

Things get a little convoluted from here in terms of plot. It turns out that the person responsible for the break-in at the Pentagon was Lockwood's former partner and not-dead at all Devlin. What was stolen out of the Pentagon was proof that his country had abandoned him and Lockwood in Iran. He orders a group of “paramilitary types” in Iran to “Extract the Prize” because it is “Revenge Time”.

Agent Liberty somehow gets wind that whatever was subsequently extracted in Iran is making its way to the U.S. and he wants to find out more. So he suits up, in defiance of his bosses, and takes off to find out what's up. 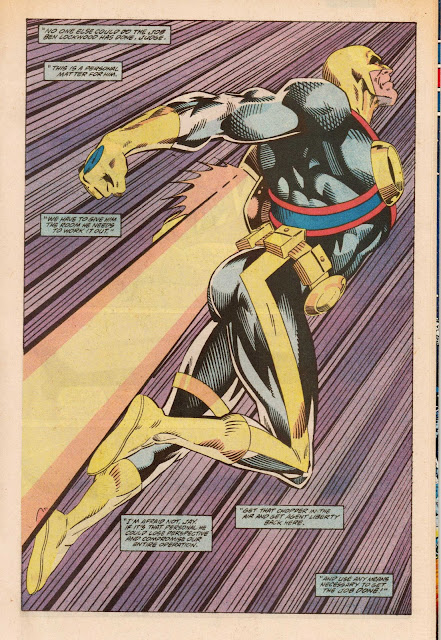 And we are back to awesome.

Liberty shows up at an airstrip in Maryland where the Iranian package has landed. He starts kicking ass, but the “paramilitary types” have got some serious firepower. Devlin is there and hits Liberty from behind. Then there is this scene: 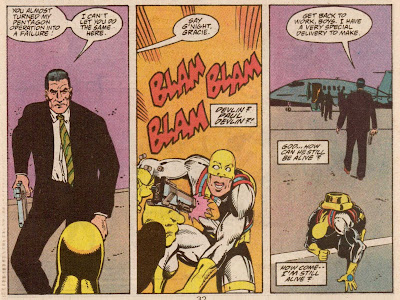 Two of the bullets were deflected by Liberty's armor; the other one hits him in the chest. In pain, he tries to make sense of the fact that Devlin is still alive and somehow involved in this whole mishigas. He also finds himself surrounded by heavily armed “paramilitary types” who don't have his best interests at heart.

His team's helicopter makes a dramatic entrance and is able to disable the “paramilitary types.” Liberty goes totally rogue now, given his personal involvement in everything that is going on, and takes off after Devlin in direct disregard for the orders from his higher-ups.

It turns out that what was “extracted” from Iran earlier was “a small, crude, nuclear device” and Devlin is planning on dropping it on Washington.

Not only does this give credence to our government's long standing suspicions about Iran's nuclear capabilities (and should provide impetus for an invasion), but it also poses a serious problem for Liberty.

Liberty catches up with Devlin's plane and, at gunpoint, reveals his true identity as Ben Lockwood.

Devlin explains that the reason he is going to destroy Washington with a nuclear device is because of his abandonment issues, as well as a sense that America has turned into a “weird, deformed country.” He then explains that he was able to survive all these years in Iran because he became an informant, giving up “every bit of American Intelligence” he could, and eventually an Iranian Operative.

With this last admission he pulls the trigger of his gun. 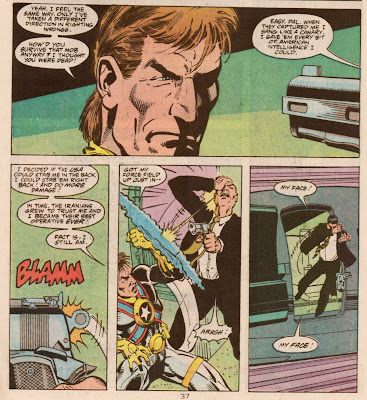 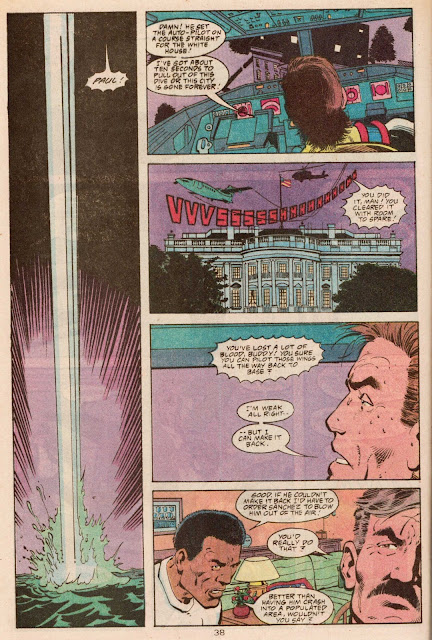 and the end of the comic.

Sure, the “solider abandoned by his country” story is a pretty classic trope at this point and Jerguns is breaking no new ground here. Sure, the storytelling in the comic becomes overly compressed at the end, lessening much of its emotional impact. Sure, there are a lot of “what the's?” and “how did's?” in the plot. Sure, we've got a low-tier (at best) superhero prancing about in his spandex.

Even with all of these distractions, Dan Jurgens and Dusty Abell have pulled off something pretty amazing here. There's a history lesson wrapped in a lesson about unintended consequences. There's an examination of how people react to brutality and abandonment. There's a sense that even when the power structure is corrupt, the individual can still make a difference. There's action. There's intrigue. There's some of the best sound-effects ever in comics. And there is a feeling of weight to this book, that there are ideas here upon which to ruminate – ideas that, as we grapple with them, make us better somehow – not just as individuals, but also, as members of our larger society.

With liberty, we can trample on the throats of others in a quest for our own success, or we can take them by the hand and see what we can do together.

Agent Liberty #1 has some answers for us, I think, and it only cost me fifty cents.

See you next week and remember, Comics Can Be Important.