In these economic times, finding inexpensive entertainment is difficult. Thank goodness for the local comic shop and a slew of comics nobody cares about anymore! Each week Daniel Elkin randomly grabs a comic from the bargain bin (for 50 cents) to see what kind of bang he can get for his two-bits. These are those tales. 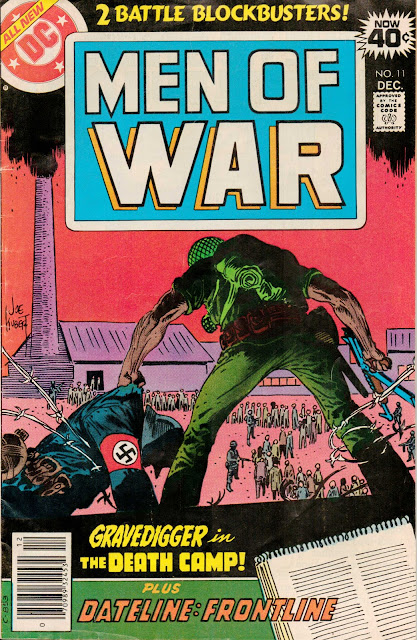 I THOUGHT … *SOB* … I WAS FIGHTING FOR A BETTER WORLD...
In December of 1978, Cleveland, Ohio, under the leadership of Mayor Dennis Kucinich, became the first large American city to go into default since the Great Depression. In Iran, two million people demonstrate in the streets against the Shah. These two events are not related.

December of 1978 also saw the arrest of serial killer John Wayne Gacy, the birth of both Manny Pacquiao and Katie Holmes (allegedly to different mothers), and the release of the Susan B. Anthony dollar.

In the world of comic books, his was the moment in history when DC Comics released Men of War #11.

Writing this column isn't always easy. This is usually because the comic I randomly pull out of the bargain bin is complete crap and a struggle to get through .This time writing this column is going to be difficult because this is one of the more emotionally draining comics I have ever read.

As its title suggests, Men of War was one of DC's pulp war comics. It featured a character named “Code Name: Gravedigger.” Gravedigger was the nickname for an African-American solider named Ulysses Hazard who, as the masthead points out, was “a man who had to fight not only the enemy – but his own country.” 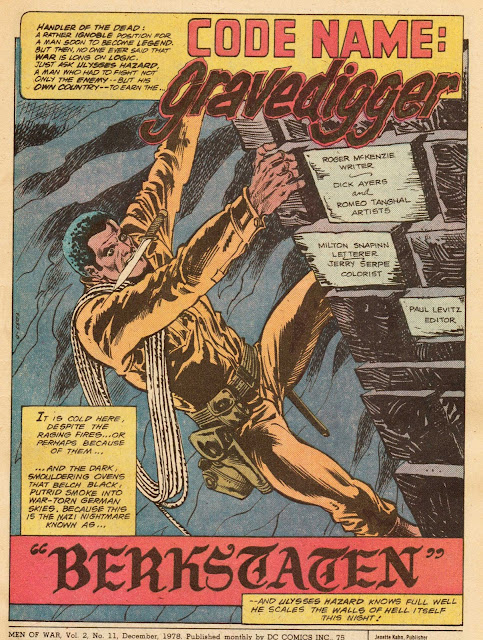 So not only is this comic about an African-American solider trying to overcome the rampant racism of the American Armed Forces during World War II, but in this issue, he tries to save a woman from “Berkstaten,” a Nazi Concentration Camp.

Remember that this comic book was published in the 1970's. The Nazis' “Final Solution” was not really in the public consciousness in the same way it is today. A few month earlier, though, in April of 1978, NBC had aired the mini-series The Holocaust, which had finally opened the floodgates of discussion on this topic. I guess DC comics decided it was time to ride this wave.

So here is a comic not only about racism, but also about genocide. Normally this column is full of groans and witticisms relating to how bad the comic I am enduring is. That is not and can not be appropriate this time.

As seen above, the comic opens with a splash page of Gravedigger scaling the walls, a knife clenched in his teeth. On the next page, the horror of the death camp is revealed. 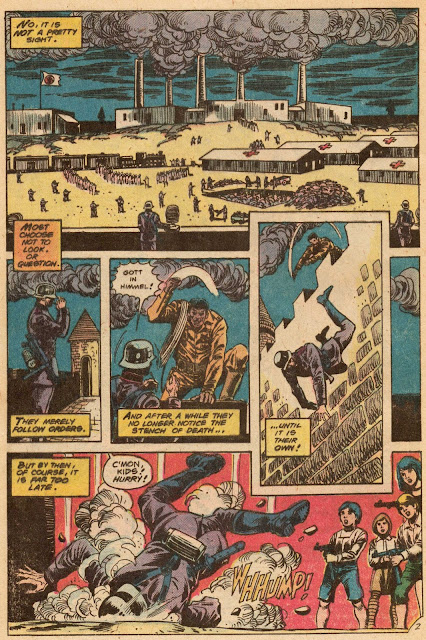 Gravedigger tosses the dead Nazi off the wall in front of a group of children with automatic weapons. These children are there to save their mother from the clutches of the Nazis.

The eldest daughter, Marie, is all business, but it is obvious she is masking her fears, her dread, and her panic. 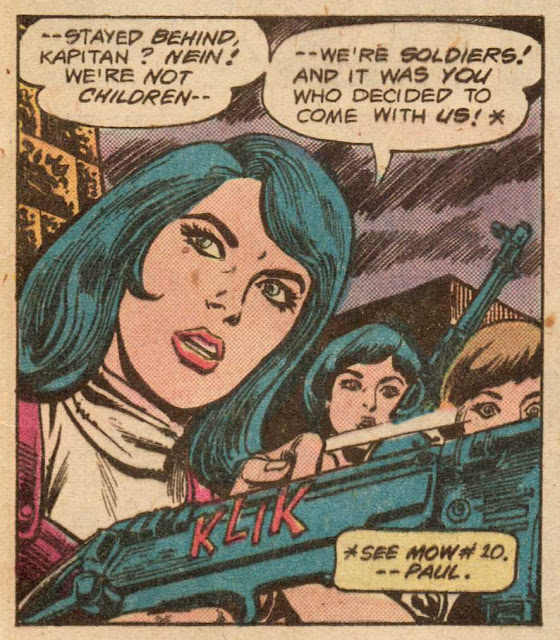 Gravedigger encounters another Nazi on the wall who has mistaken him in the dark for his friend, Joseph. 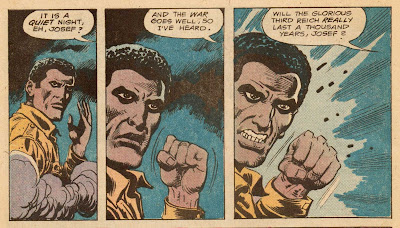 The look on Gravedigger's face as he slowly clenches his fist reflects all the cruelty under which he has suffered in the human race's stupid quest for individual superiority.

With a powerful left cross, Gravedigger takes out the Nazi. But before using his knife, Gravedigger sees that this Nazi is just a young kid, probably no more than 17, and stops himself. The Nazi is confused. How can a black man so easily defeat a member of the Master Race? All of his programing won't allow him to comprehend what is happening.

The Nazi, out of the blind fear of death and the confusion he is suffering, agrees to help Gravedigger find Anna, the mother of the children, inside the walls of Berkstaten. He tells Gravedigger that Von Krugger, the camp's Surgeon General, must surely have her in custody.

While not historically accurate, the art of Dick Ayers certainly captures the degradation and the horror under which these women suffered. The more I look at this panel, the more powerful its emotional impact.

The comic then cuts back to Gravedigger and the young Nazi Private. As they break into the “medical” building, another Nazi turns his weapon on them. Gravedigger pushes the young Private out of the way before killing the other Nazi. This act essentially saves the life of the Private, which only further breaks down his conditioning and causes him to question the nature of the Nazi reality. He says to Gravedigger, “I don't understand. You saved my life, but we are enemies.” To which Gravedigger replies, “That right, kid. We are. But that ain't our fault, is it?”

This one line written by Roger McKenzie sums up the predicament of war. Politics demand that these two men kill each other. The reality is, though, that neither of them are truly personally involved in this conflict. They are cogs in a machine, stripped of humanity and personality – dehumanized killing machines. It takes a man like Gravedigger, who as an African-American has had to struggle to assert his humanity in the face of his own country's hatred, to recognize the humanity in his “enemy”.

Finally, Gravedigger and the Nazi Private enter a room where they find Anna and an old man. This old man begins to recount the horrors the Nazis have perpetrated on him and Anna in the name of “science.” They have been stripped of their individuality and have been treated as lab animals. As the old man begs Gravedigger to kill him so as to end his horror and his suffering, the Nazi Private has a sartorial moment where he understands the true face of those who have been promising him paradise.

In an almost nondescript panel, Gravedigger is about to grant the old man his wish, but, at the last moment, averts his weapon yelling, “No! I can't play God! Damnit! Not like this!” There is pathos in his cry – it is palpable.

The gunfire draws the attention of Von Krugger. He enters the room and gets the drop on Gravedigger. His first words in response to Gravedigger's shout of being unable to play God are, “Of course you can't, Schwarz!”

Then the comic gives us this scene: 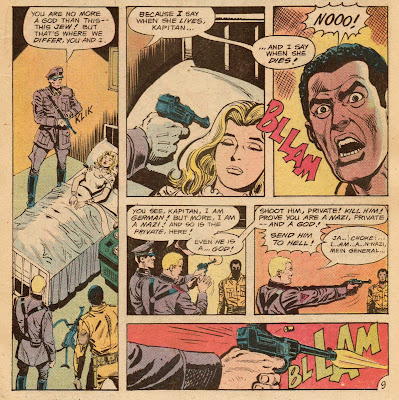 Oh, man. This is horrific stuff. Von Krugger shoots Anna in the face at point blank range without batting an eye. He has dehumanized her to the point where this sort of action is almost second nature. You see vermin. You eliminate it.

Handing the gun to the Nazi Private, after all this young man has been through, is ultimately the true test of the Private's will. What is stronger, his conditioning and need to assimilate into the greater society, or his new found understanding of the reality of this underpinning?

As the Private fires the Luger, the answer becomes absolutely clear. 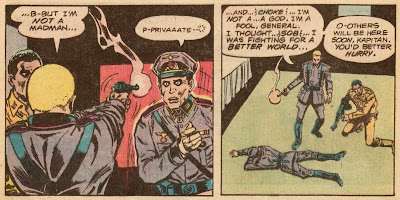 Score one for human dignity.

Marie hears the gunshots and bursts into the room. She is confronted by the vision of her mother, lying in bed, a bullet hole in her head. Gravedigger scoops up Marie and begins to make a run for it. As Gravedigger and Marie flee from the room, the Private turns to the old man who had been begging for death. Off panel, he grants him this final wish and allows the old man a shred of dignity. Then, the whole of his life crashing down around him, the Private turns the gun on himself.

And a little something inside me, here, finally breaks. It is too much. The horror of this comic is unrelenting.

While this has been happening the rest of the children have been able to get the rest of the prisoners aboard a train. After blowing up a fuel tank to set the whole camp on fire, Gravedigger and Marie are able to reach this train at the last minute and escape.

I guess, in a way, the comic ends on a small note of hope.

I don't feel qualified to comment any more on this comic. The sufferings I've had to face in my life have been so small compared to what the people depicted in this book go through.

The hatred bred of racism and antisemitism is a destructive force. It allows for the dehumanization of individuals. It clouds reality. It makes men and women into beasts, into monsters.

This comic, regardless of the confines it struggles under, points this out in a unique way. The team of McKenzie and Ayers have demonstrated that in the hands of artists, even something like a pulp War comic book can be used to remind us not only about our humanity, but also about our predilection towards cruelty. Such is often the purview of great literature.