Random Pulls from the Bargain Bin
THIS COLUMN ORIGINALLY RAN ON COMICS BULLETIN
In these economic times, finding inexpensive entertainment is difficult. Thank goodness for the local comic shop and a slew of comics nobody cares about anymore! Each week Daniel Elkin randomly grabs a comic from the bargain bin (for 50 cents) to see what kind of bang he can get for his two-bits. These are those tales.
December 21, 2011 – paid 50 cents for:
CATALYST: AGENTS OF CHANGE #1
Published by: Dark Horse Comics
Written by: Eddie Campbell and Pete Ford
Art by: Tim Hamilton and Steve Carr 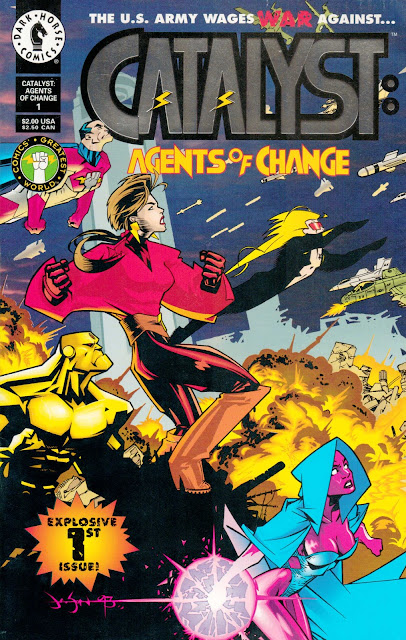 IF YOU BOYS DON'T ZIP IT, THIS “SKIRT” WILL HAVE TO REMIND BOTH OF YOU WHO'S IN CHARGE HERE.
Jack Kirby died in February, 1994. This event, as far as I am concerned, was probably the most significant thing that happened then.

Sure, Jeff Gillooly plead guilty for hitting Nancy Kerrigan in the knee with a pipe. Sure, Edvard Munch's The Scream was stolen in Oslo. Sure, Sonic the Hedgehog 3 introduced the world to Knuckles, sure Ace Ventura: Pet Detective opened in theaters. Sure, Dakota Fanning was born.

But none of these events were as culturally important in February of 1994 as the loss of “King” Kirby.

Except... maybe... just maybe... the release of Catalyst: Agents of Change #1 by Dark Horse Comics.

Then again, I may be overstating this. I did just find Catalyst: Agents of Change #1 in the bargain bin, after all.

This comic was part of Dark Horse's attempt to create a shared universe between a number of titles. The concept itself did not last very long. Mostly, it seemed, because the majority of the titles sucked.

But still, I have high hopes for Catalyst: Agents of Change, if for no other reason than the title alone is awesome. If nothing else, all catalysts ARE agents of change. Deal with it.

So what the hell is Catalyst: Agents of Change anyway, other than one of the greatest names for a comic book, ever?

Catalyst: Agents of ChangeFormation: The Warmaker IncidentWarmaker, a former United States soldier turned supervillain, is sent by the government to be imprisoned in The Vault, a super-prison located in Golden City. He escapes (or is allowed to escape by Grace) and begins a rampage.
He faces various heroes. Rebel can fly and shoot energy blasts. Mecha is a tall, yellow, mechanical construct. Titan has flight, speed and superstrength. Ruby has bright red skin and can heal others. Warmarker causes massive amounts of destruction to the city, until Grace arrives to face him.
She easily defeats Warmaker, but Titan attacks him for no reason. Warmaker strikes Titan, knocking him into Rhapsody, the local healer. She falls into a nearby crater and dies of a broken neck.
Warmaker escapes. Grace uses this and the death of Rhapsody as a rallying point. She announces Golden City will secede from the United States of America.

Got that? Good, because I don't.

But this does at least provide some “context”...

Catalyst: Agents of Change opens with two guys drinking in a bar. They head out in the streets and we get this: 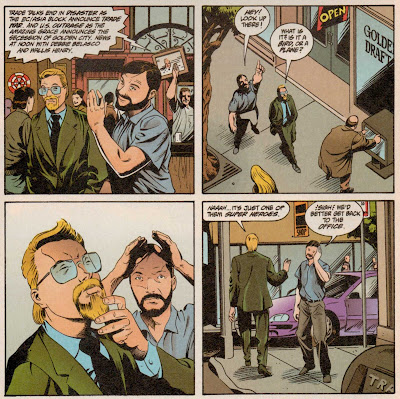 I assume this is supposed to be funny, either that or a commentary on the ubiquitous nature of super heroes in this fictional world If it is the later, then I am a bit concerned about this comic. If throw-away characters in the book can't muster any enthusiasm for its lead characters, how am I supposed to? If it is supposed to be funny, it strikes me as one of those scenes that a writer quickly jots down in their idea notebook as an example of how witty they are. To open a comic book series with it – that takes some balls.

This comic may, in fact, suck after all.

Still, in the spirit of the season, I gird my enthusiasm. 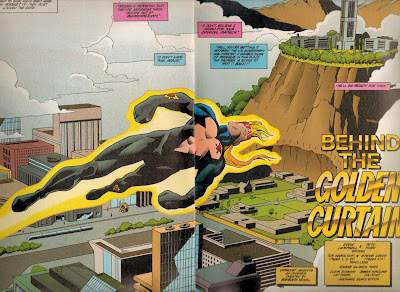 Ummmm.... not really sure about this guy with his heart shaped chest cut out, blonde pony tail, and red glasses. Maybe that is why the denizens of the city aren't excited to see him. And the city looks kind of like it's made of Legos. Uh-oh. 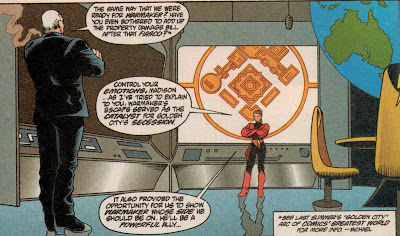 The comic then suddenly shifts to the inside of some sparse “command center” looking room (replete with shiny consoles and giant monitors). Herein we find Grace and Madison having a conversation about how Golden City (the previously noted Lego town) is going through the process of secession from the USA, how an American army is amassing outside of its borders in order to stop that process, and what a bitch Grace is.

Then the book cuts to a bunch of super-powered heroes ordering around a bunch of yahoos in yellow hardhats as they build a burnt umber wall out of … well... seemingly more Legos.

Two of these supes, Titan and Warmaker (who was the villain previously), don't seem to like each other much. Things get testy when Warmaker makes a comment about Titan's commitment to building the Lego wall. 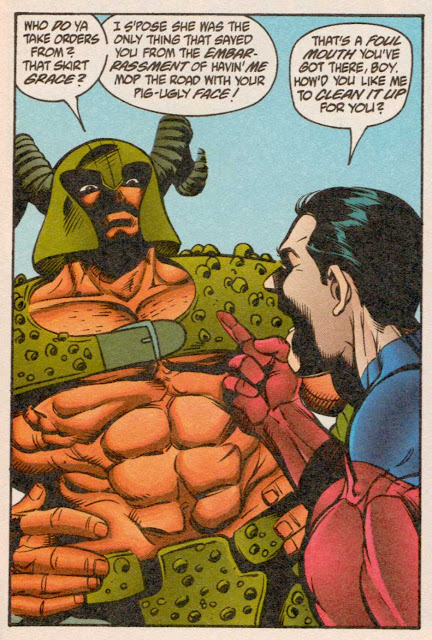 Although he has nicely defined abs, as a manager Warmaker could probably benefit from reading Who Moved My Cheese. Also, this comic came out in 1994. What kind of thick-headed misogynist still called women “skirts”? Must be the “horns” on his head.

Then, suddenly, from out of a floating black diamond steps Grace who inadvertently makes a bawdy pun. 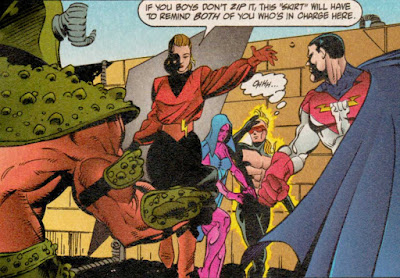 At first I thought the fey, blonde, ruby sunglasses wearing hero in the background of this panel was reacting to Grace's joke, but it turns out that this dude has one of those superpowers that he has to transfer to his twin brother after awhile to keep from blowing up or something (or something).

Titan and Warmaker put aside their differences once Grace informs them that they have a shared enemy, the US army, and that their enemy is on the move, headed towards Golden City.

Grace sends Warmaker and a yellow metal guy named Mecha to defend the city on the ground. She sends Titan and blond pony tail (whose name turns out to be “Rebel” seriously cementing him as a true ambiguously gay superhero) to attend to air defense (as they both fly). Another hero, Ruby (who is red – imagine that) is to stay inside the city, and then Grace informs them all that she will be coordinating the battle from within “The Citadel.”

And I am about to fall asleep and bemoan another lost fifty cents to the devil who revels in the production of crappy comics.

Then, suddenly, out of nowhere, this comic turns awesome.

And everything starts to reflect it.

The writing team of Campbell and Ford lead the reader to focus on the heroes Titan and Rebel “rising up among the anvil-topped clouds where the gods once hammered out their thunderbolts.” Here they confront six US Air Force Stealth Fighters barreling down upon their faces.

Artist Tim Hamilton (who drew pages 6-24) also gets all caught up in this awesome tsunami and begins to pull out all of the stops. Like when Titan lands on the hood of one of the Stealth Fighters. 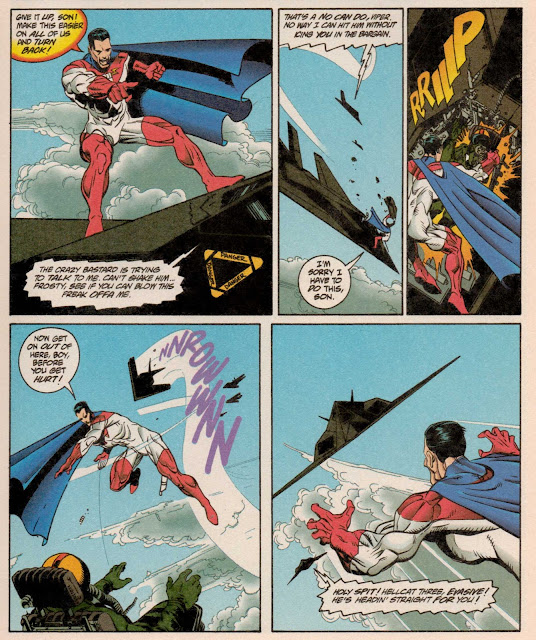 But it doesn't stop there. Get a load of this splash page: Which then leads to this: 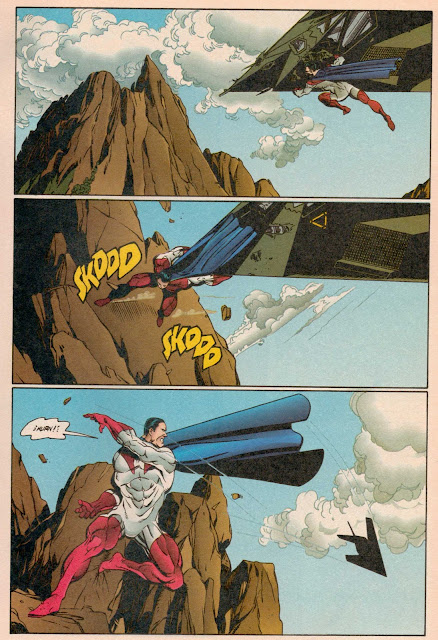 While this is going on, Rebel blows some things up, deals with the fact that he has held on to his superpowers too long (remember, he has to transfer it to his twin brother), and eventually passes out from all the strain. This probably sets up a whole story arc at some later date, but whatever, it is what it is.

From her command center, Grace uses one of her black diamond teleporter thingys to take care of an errant US Airforce missle.

Next, Catalyst: Agents of Change #1 focuses on the Ground Offensive. Mecha and Warmaker have their hands full with a bunch of tanks. Literally. 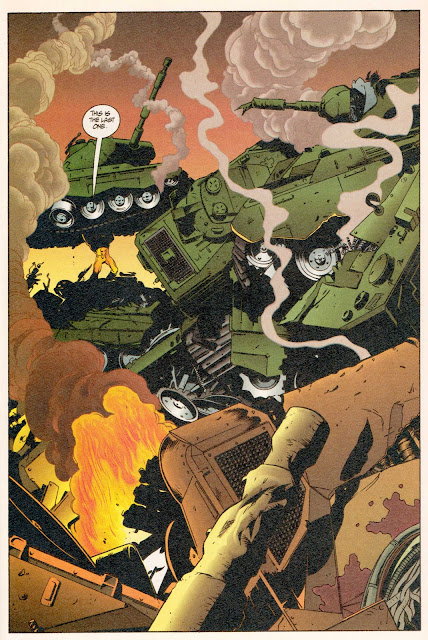 After building an outer wall of scrapped tanks around the perimeter of Golden City, Mecha and Warmaker notice that one of the Stealth Fighter's missiles actually made it past Titan, Rebel, and Grace's black diamonds. Mecha wonders aloud why Grace could stop one missle, but not another. To this, Warmaker cryptically replies:

I don't know about you, but personally I hate getting it in the neck when it don't work out right (just like Barry White).

The comic then shifts focus to the camouflaged Recreational Vehicle base (special issue) of the US Military forces, where the mustached man in charge casually accepts the loss of life in the name of the greater intelligence mission (not that this would ever happen in real life). 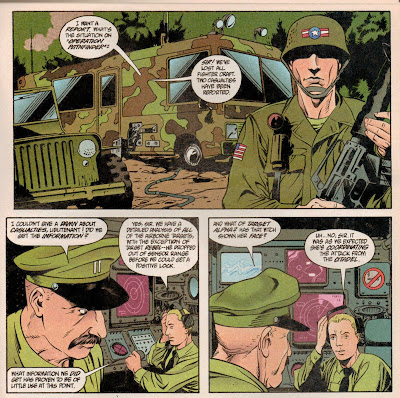 Back at the Citadel, Grace and Madison are perplexed as to the actual purpose of the military attack they just successfully rebuffed. 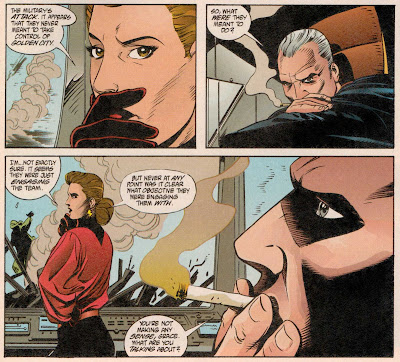 Which then leads to this awesome panel 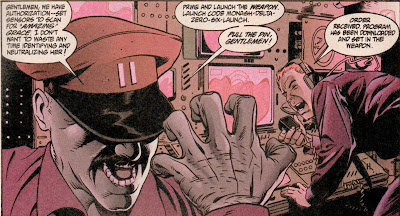 I have no idea why everything suddenly is red inside the command RV, but from the brim of his hat over the guy's eyes, to his fucked up hand gesture, to the guy suddenly needing to bend over the console to scream into his radio, this is the sheeeet! There is so much going on that is over-the-top in this panel that it just screams out, “I'm a fucking comic book, let me entertain you!”

And the ridiculous momentum of this continues as they start “PULLING THE PIN!” 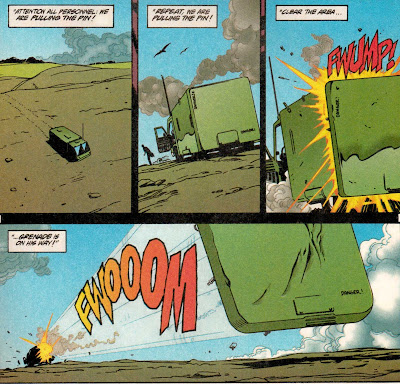 FWOOOM, baby, fwooom!
It's almost like a freakin' action ejaculation going on here -- A “what-the-fuck” head blast combined with a “give-me-more” testicle tightening – and it all culminates in this: 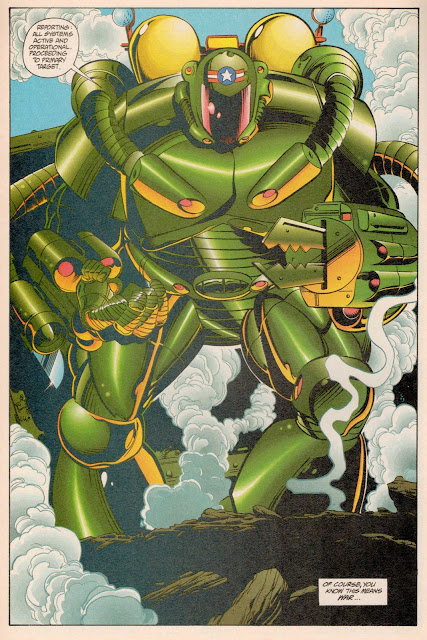 BOOM! Ridiculous.
“Of course, you know this means WAR...”

Oh my god, this is great.


I'm a gumbo. I'm a two-headed whale. I am flailing arms akimbo as the wind hits my sail.
Catalyst: Agents of Change #1, if you were a prostitute, I would leave a thousand dollar tip on the dresser as I left.

Man, this was one entertaining comic book ride. I was totally unprepared for the sudden shift to awesome this book took after such a crappy set-up situation.

I mean, this thing had “I'm a Crappy Comic” sand-blasted all over it from the front cover straight through the first seven pages, and then it transforms, explosively, into some Die Hard level “Yippee-Ki-Yay” action excitement in a way that, stripping away any intellectual conceits, can be damn entertaining.

And it was damn entertaining.

And for fifty cents? I mean, come on? How does that happen nowadays?

Randomly grabbing Dark Horse's February 1994 Catalyst: Agents of Change #1 out of the bargain bin? It's a Festivus Miracle and a bold tiding of the promises of the new year.

May you and yours have a Catalyst: Agents of Change #1 level awesome 2012!