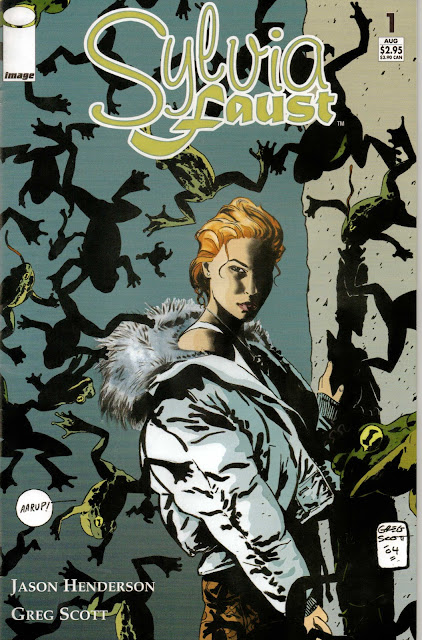 THAT IS THE CHERRY ON THE CAKE OF MY DAY.

Here's a quick rundown of some of the events that occurred in August of 2004:

Normally I can take all these disparate events and get a general feel for the zeitgeist of the moment. This time, though, August 2004 eludes me. I can't see the pattern. I can't put the pieces together.

But I think I know why.

In August of 2004, Image Comics released issue #1 of Sylvia Faust and it pulled everything all together within itself and left us wanting more.

Just take a look at this first page: 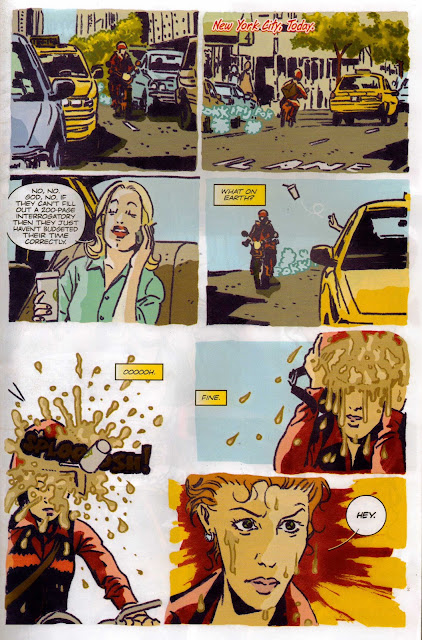 Now that's not at all what I was expecting given the cover of this comic. Greg Scott's art is the first thing you notice on this page, right? His loose line work has a casualness to it that really appeals to me. There's a softness there that is engaging and welcoming. Scott also did the cover of this issue which clearly demonstrates that he has “comic book chops,” so I know that the interior style is a choice, not an inevitability. This makes me like it even more.

The next thing you have to notice is Leslie Ann Barkley's colors. Once again, there is that softness to her palatte and a wash to her technique. And then there, in that last panel, BOOM, check out those reds and yellows. I dig what's visually happening in this comic.

And what is happening in this comic? This first page has a woman in a cab throwing her drink out the window which splashes onto a woman riding a motorcycle. OK. That's your set-up.

Turns out we're in New York City. The drink tosser is a lawyer and a bitch. The tossee is just trying to solicit an apology. The tosser refuses to listen. The tossee then does this. 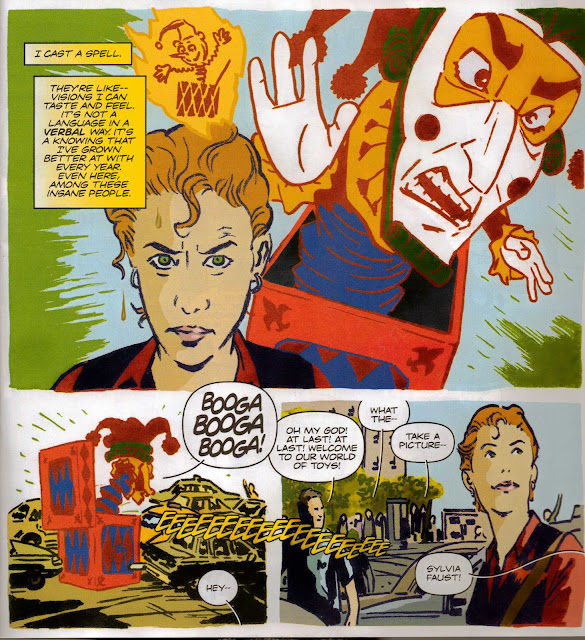 I think I am falling in love with this comic. If I start to gush a little, I hope you understand.

So our spell-caster here is our titular hero, the aptly named “Sylvia Faust”.

On the next page Sylvia is reprimanded by Annie, her mentor who is totally rocking that whole 1972 Gloria Steinem look while she chain smokes and tells Sylvia that casting spells on public streets is a no-no. She tells Sylvia that she needs to be more inconspicuous – “as in the Latin – 'Don't Conspicuate.'”

Annie even says things like, “Oh, land o Goshens, no.”

Next, we meet this guy: 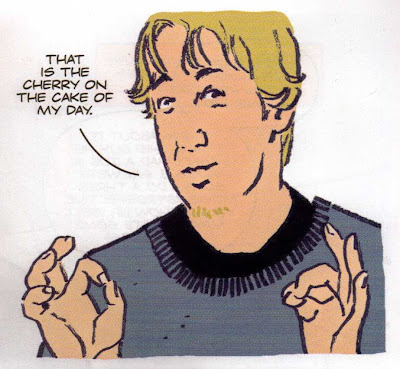 Tim is asking all his employees if they've seen Lance Marks. Nobody seems to know that Lance Marks was even supposed to be there. While this certainly could be viewed as an indication of Tim's lack of management skills, or at least a breakdown in company communication, I just think it's funny. Then again I'm falling in love, and because of this I am more than willing to see little flaws as endearing.

Those chin whiskers – they're just so cute.

Then the comic jumps from the Apocalypse over to Sylvia and Annie's apartment. 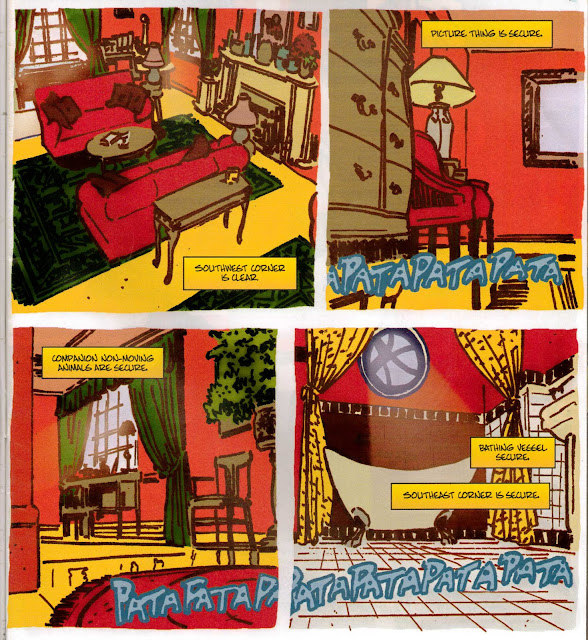 Barkley's color work once again stands out. The reds, greens, and yellows all leap from the page in a warm primary color embrace that lingers and soothes. I want to nestle my face in its hair and dream of becoming a better man.

Sylvia and Annie's apartment has a guardian. Sort of. It's this thing. 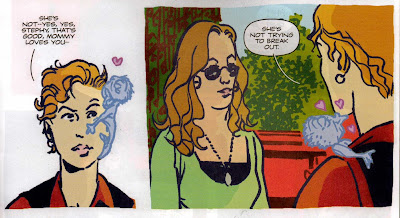 And it's so damn cute. It's name is Stephy and it really loves Sylvia.

Sylvia and Annie have another discussion about the importance of Sylvia blending in. Annie is very firm in her conviction that Sylvia get a job. Sylvia points out the fact that with her magic, she could just “make money,” but Annie tells her she would just get caught and that she really doesn't want to “see what you'd (Sylvia) do to these people's criminal justice system.” I, for one, totally disagree with Annie here, especially given the Kabuki Jack-in-the-Box Sylvia previously manifested. But then again, I'm letting my emotions get away with me...

Sylvia next gets a job at American Telenova Corporation, a telemarketing company that doesn't see what it does as sales, but as “opportunity Chauffeuring!”

Sylvia starts chauffeuring opportunities, but is resoundingly rejected time and time again. Her frustration leads to this: 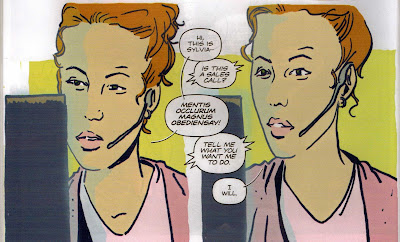 Sylvia could tell me what to do also.

This magical marketing backfires on Sylvia, though, as her customers start calling back threatening to sue. Although another significant portion of them want Sylvia “to tell them more things to do.”

This gets Sylvia fired.

I understand that Henderson makes this choice in his writing to move the plot along and keep the tone of the book consistent, but I suspect that were this actually the case, the good people at American Telenova Corporation would be more interested in figuring out how to use this situation to further line their pockets. Then again, I tend to lean towards cynicism when it comes to Capitalism. Sylvia Faust, on the other hand, does not.

And that's cute too.

Cute as a bug.

Next, the comic jumps back to the adventures of Tim the movie theater manager.

He finally locates Lance Marks, the guest of honor for the Kung-Fu movie fest he is putting on. 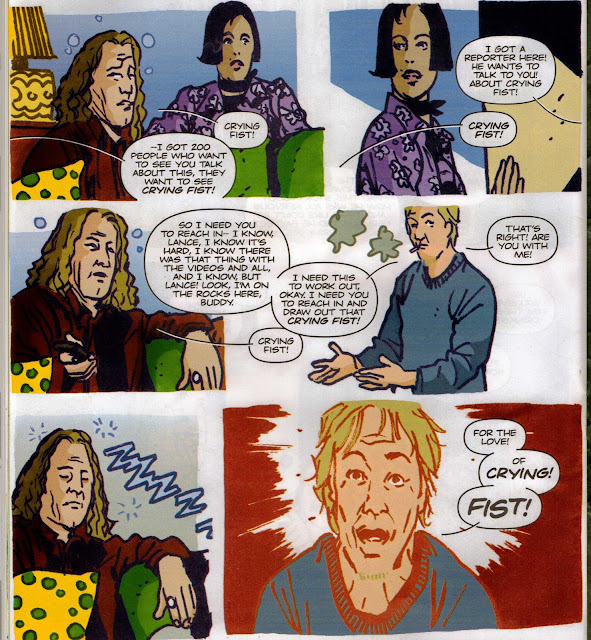 The comic then goes sideways. Literally. The layout changes from vertical to horizontal for two pages and the page background goes from the previous white to a full on black.

The action in these two pages is occurring “In the place of Sylvia Fuast's birth. A distant, distant place.” Here, an older bearded gentleman in a sweet fur-lined cloak is having a discussion with some Lovecraftian “Old One” about how he can recover power and “unite the Barony with the Throne of the Queen.” 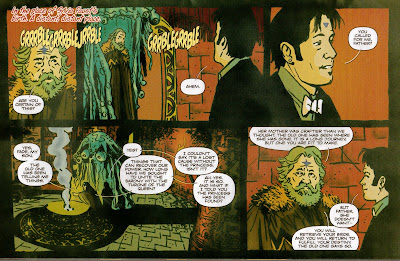 The plan seems to revolve around marrying the older bearded gentleman's bow-tie wearing son to Sylvia. It seems as though this match was not something that Sylvia was interested in, and she has fled this land to places unknown. The Lovecraftian “Old One” has figured out where Sylvia has gone, though. The older bearded gentleman tells the bow-tie wearing son that he is to “prepare a retainer” and go get her.

Thus a plot is born.

And it's cute too.

For it's information, the Lovecraftian “Old One” gets a Scooby Snack in the form of Philip, the Footman. 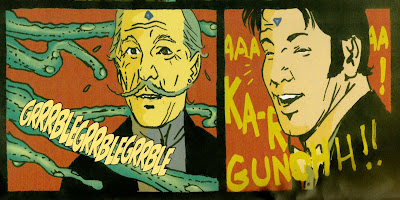 It says, “Grrrblegrrblegrrble” as it eats the souls of innocents. How could you not love how cute that is?


The comic then goes back to the Apocalypse Drafthouse where Tim is still trying to figure out what to do with his drunken star. Luckily for Tim, Sylvia shows up at this exact moment looking for a job. Tim tells her that the position is already filled and “right now I got a guest who's too drunk to speak.”

Sylvia tells Tim that she can sober Lance up, but she will only do so if she can have a job. This is certainly an interesting tactic to take during a job interview, one that I might consider the next time I have one. This might also look really good on a resume – under skills, list: “Can Sober Your Ass Up.”

Anyway, Sylvia being Sylvia, she does a little hoo-doo and we get this: 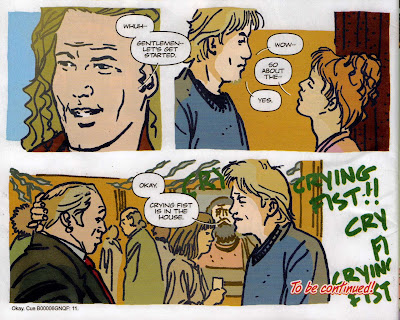 Oh yea – Crying Fist is in the HOUSE!

So Sylvia gets the job at the Apocalypse Drafthouse and the comic ends. I get the sense that there is going to be some sweet snuggly repartee and romance between her and Tim in the coming issues. Then the Bow-tie son will show up and complicate things. Sylvia will continue to cast some awesome spells (like manifesting a triple sparkly rainbow unicorn of doom or something), and everything and everything and everything will be cute and adorable and wonderful and the best thing ever. EVER!

After issue two, I'm sure I'll want to introduce this comic to my parents. Maybe after issue three we'll talk about moving in together. After issue four I'll find myself lingering in front of jewelry store windows eying rings I can't possibly afford. After issue five.... Oh....

With these long range romantic plans dancing in my head, I set upon myself the task of trying to track down every issue I could find of Sylvia Faust.

To my initial horror, I found out that Sylvia Faust was only planned to be a four-issue mini-series through Image. To further rip my heart out, though, only two issues came out! Nobody on the internet seems to know what happened to the series. It's like the last two issues were kidnapped by some mysterious malevolent but maladroit mustachioed menace and taken to some terrible titanic tower in an alternate alien dimension. Sylvia Faust is in peril! A hero must be summoned to take on the quest of saving it and journey through terrible trials and tribulations! Who will rise to the occasion?

I know just the guy.

Who's got two thumbs and a comic-crush on Sylvia Faust?

And to think it all started in a Comic Shop. Two strangers meet in a long box. One, a comic rudely canceled mid-series, while the other is still stinging from his experience with Whisper #4. Over fifty cents, these two discover what it means to be alive again and begin a whirlwind romance and adventure that will captivate your heart...