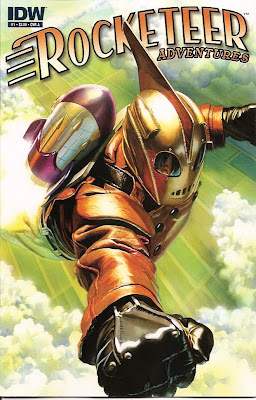 What would you do if I told you that this mini-series would be celebrating the further adventures of the late (great) Dave Stevens character The Rocketeer, one of the all-time great comic book heroes?

In 2011, IDW published a 4 issue mini-series called Rocketeer Adventures which gave some of comicdom's best talents the opportunity to play in the retro-world of Cliff Secord and his pin-up girlfriend Betty. The series was obviously an homage to the talent and influence of Dave Stevens, as well as a love letter to the genre. Each issue was comprised of vignettes, allowing each creator to put their particular stamp on these characters and let their love shine.

Nothing really heavy or earth-shattering goes on in the series. Rather, Rocketeer Adventures was all about fun, celebrating the work of Dave Stevens, and reminding us that comics can be some of the best entertainment around.

P.S. I promise I have showered and changed clothes since the aforementioned wetting.