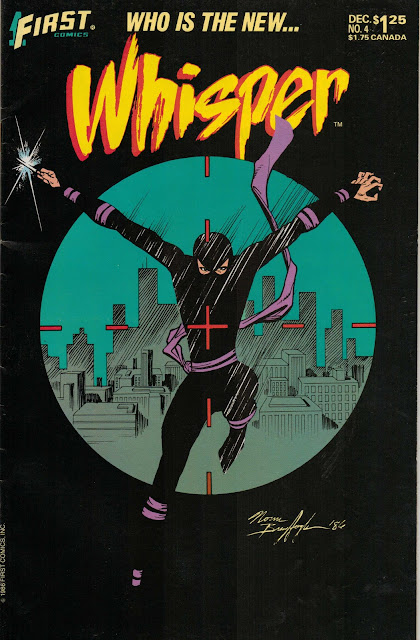 OOOOOH BOY.
So, where the hell where you in December of 1986? All kinds of crazy, nasty crap was flying around then.

Remember what happened at Howard Beach? That was in December, 1986. Then there was that 5.7 earthquake that destroyed Strajica in Bulgaria! Desi Arnaz died! The Disney Channel started broadcasting 24 hours a day! We all were watching The Cosby Show! Dick Clark's New Year's Rockin' Eve featured appearances by Barry Manilow and the Miami Sound Machine! NBC canceled Search for Tomorrow! The Way It Is by Bruce Hornsby and the Range was the number 1 single!

Fuck! The Golden Child was one of the top grossing films in December, 1986!

I swear, if you had buried December of 1986 in a lead-lined grave, it still would have figured out a way to crawl its way out to feed on your brains.

I'm sorry, but I can think of no shit-storm more perfect for the publication of Whisper #4 from First Comics.

On pretty much a weekly basis, I've been doing this column in one form or another for nearly a year now, and in that time I have come across some god-awful comics. Still, I do believe that none of them – NONE OF THEM – fucked with my brain as much as Whisper #4 by Steven Grant and Norm Breyfogle has. The irony of this whole thing is that my very first iteration of this column dealt with Prime #3 from Malibu Comics. (now archived here). The artist on that? Norm Breyfogle. Now a year later? A comic with art by Norm Breyfogle.

Don't get me wrong, I think Norm Breyfogle is a talented artist and a real nice guy, but I think he is trying to kill me.

Whisper #4 opens with this: 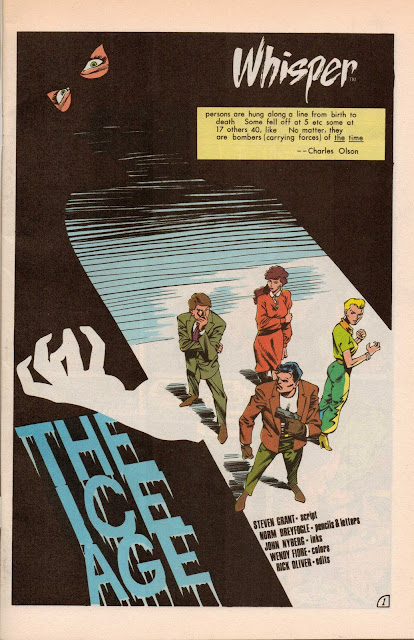 I like this layout. It's got sort of that Alfred Hitchcock movie poster feel to it, although the eyes in the upper left hand corner are kinda freaky.

While the opening page is OK from an artistic point of view, there is an early indication of the kind of ride you're in for with this comic. It appears rather prominently in the yellow text box.

“persons are hung along a line from birth to death Some fell off at 5 etc some at 17 others 40, like No matter, they are bombers (carrying forces) of the time”

This quote is attributed to Charles Olsen. The Charles Olsen I know was an alcoholic American poet who wrote dense postmodernist poetry and described himself as "an archeologist of morning." Starting a comic book with a random quote from a postmodernist poet and providing no context whatsoever for this choice is an indication that the writer, Steven Grant, was either chasing some serious nightmares or carefully plotting out some seriously sadistic mind-fuckery.

Either way, I assure you, this comic is going to hurt.

So we go from that to this: 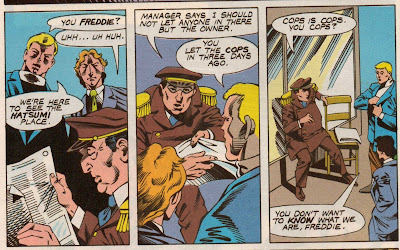 After reading the third panel here I spent the next 10 minutes or so pacing from my desk to the kitchen and back again endlessly repeating “Cops is cops. You Cops?” My dog started getting nervous.

So there are these two guys, I'll call them Blondie and Orange Hair, and they want to get into the Hatsumi Place. They bribe Freddie the Doorman to let him inside. Hatsumi is dead. He had a niece or something. The cops had gotten a call that the niece was dead in the apartment. Freddie says nobody has been in there for months.

Upon entering the apartment, Orange Hair says this: 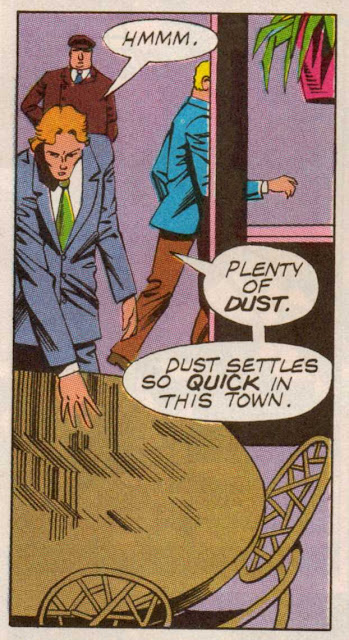 First off, a quick pet peeve. You use an adverb to modify a verb, you do not use an adjective. Orange Hair SHOULD have said, “Dust settles so QUICKLY in this town.” If only bad grammar was my only problem with this comic. If only....

Second, is he actually saying that it's hard to tell how much time has really gone by since anyone has been in the apartment because of the unique rapid dust settling properties of whatever the fuck town they are in?

It only gets worse from here.

They wander through the rest of the apartment. They see a broken window and a blood stain. They wonder aloud in front of Freddie whether or not some guy named Barrow killed her (whoever she is) and, if so, where is the body?

This takes us to this lovely scene: 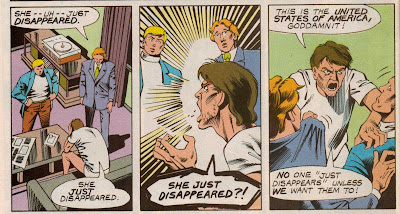 I don't know WHAT THE FUCK IS GOING ON!

They suspect Barrow is lying, but Eckart thinks Millinder is behind this, so they need to go talk to Lesa Lorenson and her boyfriend and I HAVE NO IDEA WHO ANY OF THESE PEOPLE ARE!

Then this blonde lady comes out of the bedroom and this happens: 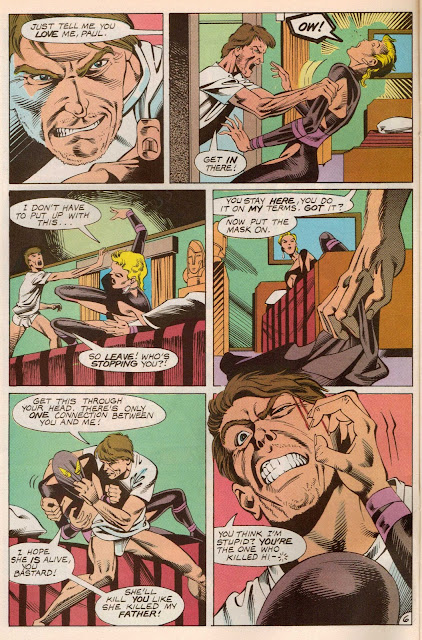 Who is this woman? Why is he beating her? Who is her father? Why does she have to wear a mask?

WHAT THE FUCK IS GOING ON?

I've said it before in this column: WE ARE SENSE MAKING BEINGS and, as such, when we are unable to make sense of what we are experiencing, we often get rather agitated. When I sit down to read a comic, I am doing so to be either entertained or intellectually stimulated. I did not sign up for agitation. This is not an emotion that a creator wants to arouse in their audience unless.... unless.... unless they are carefully plotting out some seriously sadistic mind-fuckery. 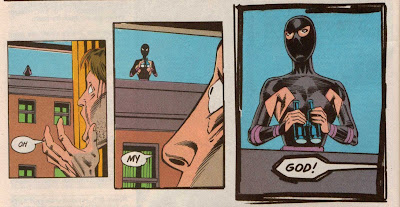 The legendary American writer Jack Kerouac once wrote: “I don't know. I don't care. And it doesn't make any difference.” I'm feeling you now, Jack Kerouac.

This whole comic then starts to unravel (like my sanity) in a blur.

Blondie goes and talks to a Doctor. 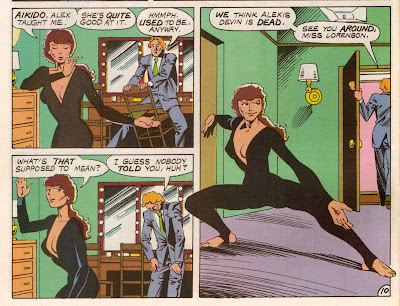 Underpants Guy gets a phone call from someone singing Come On, Get Happy.

This freaks out Underpants Guy. He runs out his bedroom door. Someone punches him in the head. Underpants Guy does some judo stuff and lands a right foot in some mustached guy's groin, which leads to: 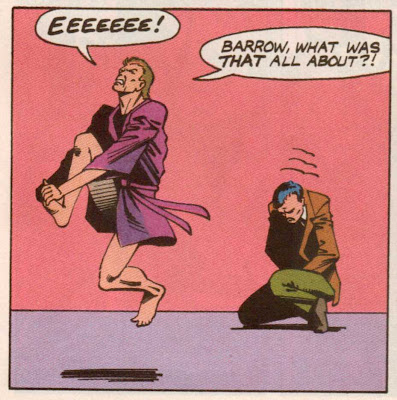 So the mustached guy is Barrow. Underpants Guy and Barrow then share a beer while talking about the fact that Barrow killed someone, but they can't find the body. They are not sure if Barrow actually killed this person or not.

Come On, Get Happy.

The song is a recording. The woman in the mask from the rooftop before (maybe?) is playing it to fuck with those guys. She then goes into a Key Making shop and this happens: 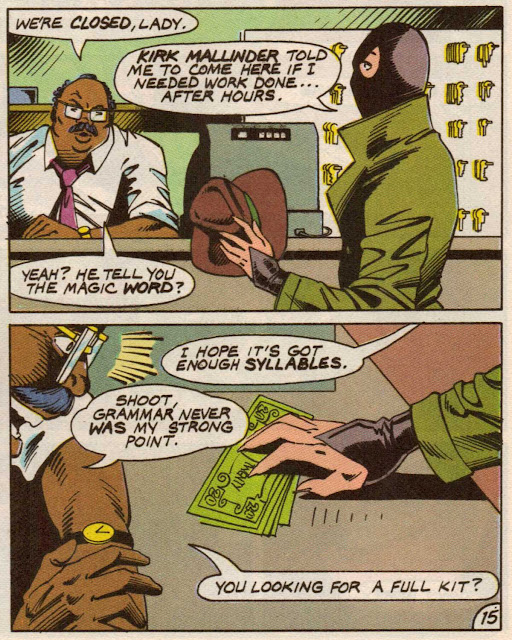 At least this guy admits to his grammar issues.

He's making a fake ID for the lady in the mask and never once asks her why she is wearing a mask. At this point, though, I don't care. Oh, and blood seems to be dripping from my ears. I just keep rolling. 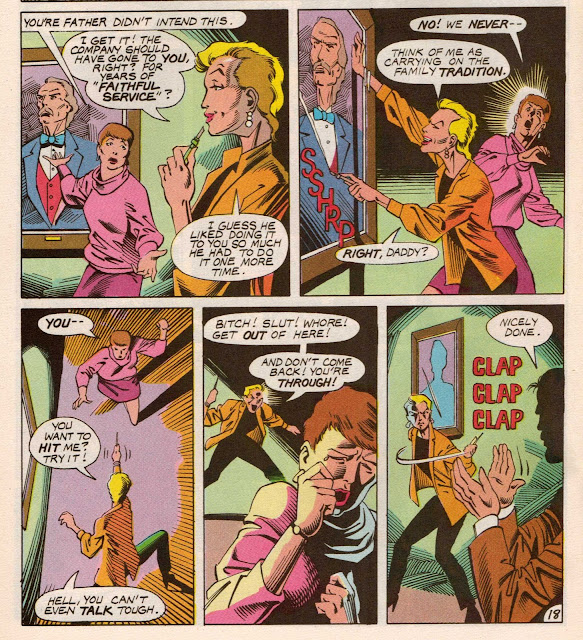 I think this is the same blonde woman who was getting knocked around by Underpants Guy earlier, but I am not sure. Why she has these issues with her step-mother is beyond me – I assume we are to assume that she's a bitch and that's enough of a reason for her to act in this manner.

“I don't know. I don't care. And it doesn't make any difference.”

Barrow shows up and the blonde lady wants him to kill Underpants Guy. Then they have sex on a drafting table.

Barrow shows up and shoots Eddie the Doorman (remember him from the second page).

Then there's this other blonde guy and the hand model talking about something. 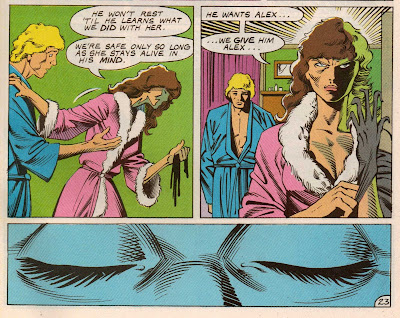 You see those eyes at the bottom of the page there? Three pages before this, there was a black panel in this space. The next two pages feature these eyes. Then there is the page above. Then, the eyes are in that bottom panel FOR THE NEXT SIX PAGES. I don't know whose eyes they are supposed to be. It's fucking creepy. Who does this?

You know who does this? Someone carefully plotting out some seriously sadistic mind-fuckery, that's who.

Barrow and Underpants Guy talk about something that, at this point, is tantamount to the sound the teacher makes in all those CBS Charlie Brown Holiday Specials.

Somebody has a switch-blade. 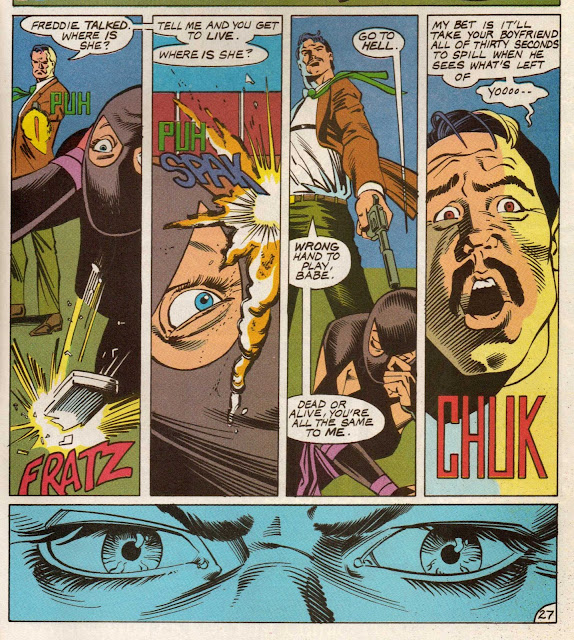 Somebody has stabbed Barrow in the back. It makes the bottom panel eyes very angry looking.

The last page does this: 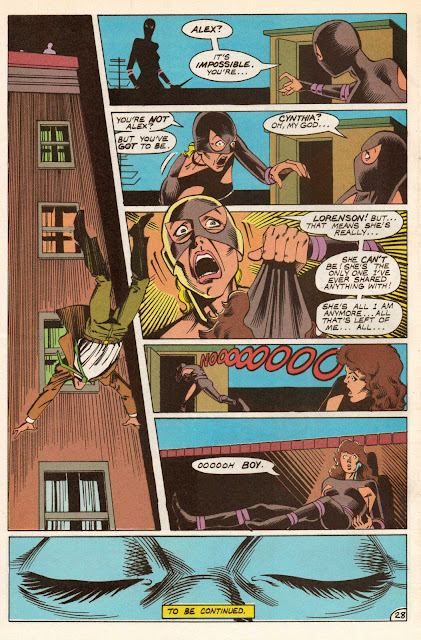 The eyes are closed.

You know what is the scariest thing on this whole page, though? The little yellow box on the bottom says, “To Be Continued.”

When I finished reading Whisper #4, I threw it on the ground and commanded my dog to drop a deuce on it. He looked up at me with a sort of “my deuce is too good for that” look on his face. Even my dog thought his shit was better than this book.

And I paid fifty cents for this.

I drove to my local comics shop and willingly gave them my money in order to get something that basically curb-stomped my sensibilities. And they didn't warn me. I thought they liked me. Why would they do that? Maybe they didn't know? Maybe they thought I could handle it? Maybe they were part of Breyfogle's plot to try to kill me?

But the fine folks at my local comics shop are not to blame for this. Really, the entirety of the blame should rest on the shoulders of Steven Grant for conceiving this monstrosity.

I mean, who creates this kind of comic? Who loads 28 pages of shit with no care whatsoever about someone walking in out of the fog? There has to be some sign posts along the way, or everyone is going to get lost.

And to do it so completely and with such glee? Who does that?

I'll tell you who.

Because he hates you, that's why.

Let Whisper #4 stand as the gold-standard for how not to write a comic book. Let the mountain tops ring with with its warning. Let the tides ebb and flow, the moon wax and wane, the circle of life procreate and die – let us never forget what we went through with Whisper #4 – let us learn from our history so as never to repeat it.

The taste of a bad comic lingers for hours. This one is going to last for days.