Poets You Should Know -- David Young 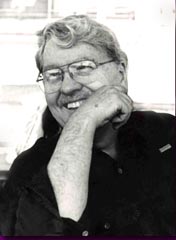 In 1936, David Young was born in Davenport, Iowa. He earned a BA from Carleton College, and an MA and PhD from Yale University.


Broth throbs on the stove. I journey into a turnip, but the
saffron-threads, forlorn, summon me back. Dicing the cake,
icing the carrot, while mites  converse in the oatmeal. Singing
with Tristan, humming with Brahms, as tomatoes collapse in
their sauce. We hold these truths to be significant—that shrimp
goes well with garlic, that bread is a Promised Land, that
onions hymn in the nose ...

Ghosts gather. Some wear aprons. They want to recall the taste
of wine with well-sauced pasta, to savor brown sugar dissolved in
espresso, lemon squeezed over smoked salmon. The tongue has
a mind of its own. The chilis are biding their time. Wolves
would come down from the mountains just for a pear and a
nugget of goat cheese. Please saunter up to mis counter and
sample a ladle of beans, a morsel of duck, a slice of porcini, as
the golden drizzle of sunlight dances outside on the grill.

And which is the poem, please? The butter, the knife that slides
right through it? Bread rises, lamb braises. Fruit ripens steadfast
in a handsome old bowl. I lick my lips. Oh tingling shadows!
Such luck, to be alive!