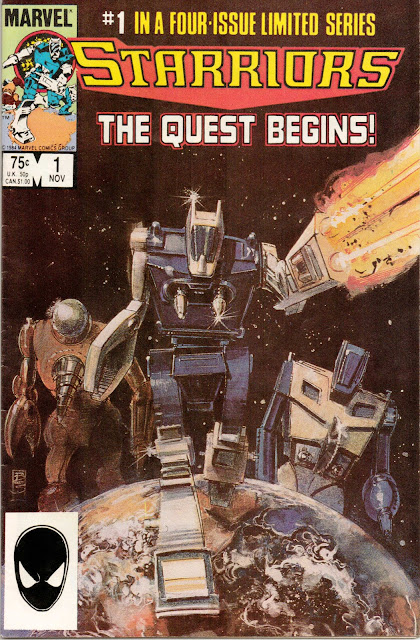 NO VIBES! NO VIBES!

It was a landslide -- the biggest since Nixon's mandate in 1972. Forty-nine states in the electoral college threw their collective heft behind Charming Ronnie, plunging America into four more plastic years of Reagan. Ah... November of 1984, you gave birth to Scarlett Johansson and this:

November, 1984, you also spawned Starriors #1 from Marvel Comics, and no amount of ScoJo or Boney M will ever make me forgive you for this (not even Boney M!).

A matter of fact, because of Starriors #1, I would like to erase November, 1984 entirely from my memory, and let me assure you that in November of 1984, I was a frickin' king.

And how does something like that happen? I mean, it's Louise Simonson writing this for goodness sake, and she knows what she is doing (usually), and Ann Nocenti is the editor and she is by no means a slouch in that department. So how does Marvel Comics put great talent on a book and end up with such an utter fucking mess?

What? You don't remember Starriors?


God, even the toys were infuriating.

So let's chunk through this garbage, fucking Starriors #1, get it over with, and never talk about it again. 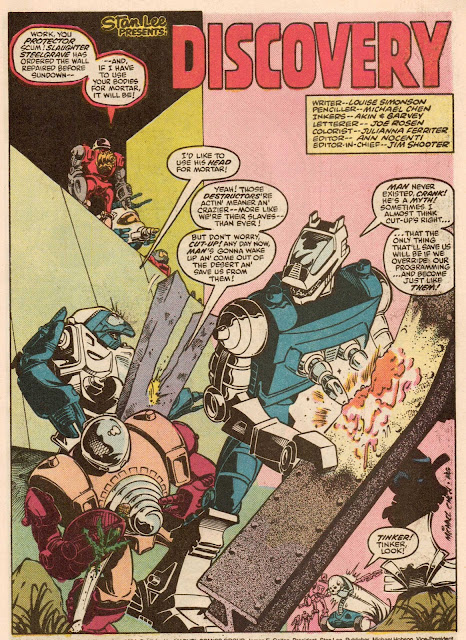 This first page sets up the entire series, as far as I can tell. It's all about robots. Some of them are good, some of them are bad, somehow humans are involved. There will be conflict. Ho-hum.

And is it me or are these some of the stupidest looking robots ever? Is it my imagination or is Slaughter Steelgrave a conspicuously ridiculous name, especially compared to the incredibly unimaginative names of the other robots, like Cut-Up, Crank, and Tinker?

Now, I know that these insipid choices were probably made by the toy-makers at Tomy and should not be laid at the feet of Simonson or Nocenti or even penciller Michael Chen. This is obviously a comic designed to sell toys, but so was Rom Spaceknight and The Micronauts – at least in those series the creators tried to do something a little more imaginative with what they were given.

Then again, when you are given a bowl full of excrement, it is really hard to make a palatable souffle.

Which begs the question: “why make this comic book at all?” 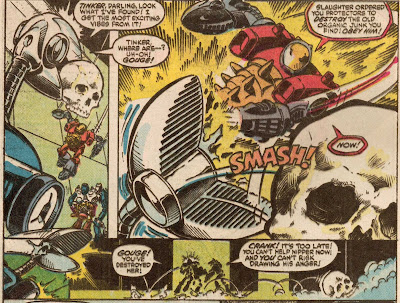 So whatever, robots that talk in the red word balloon are dicks – abusive dicks – who are unable to appreciate the artistic majesty that is the human skull. 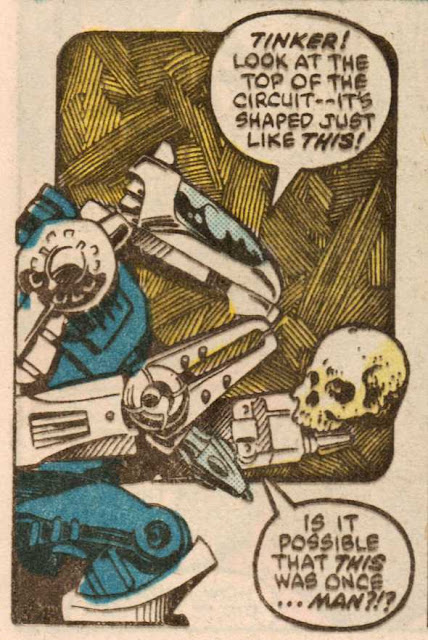 If I don't even care enough to make a Hamlet joke here, how the hell am I supposed to care about any of this?

More importantly, WHY should I care about any of this? 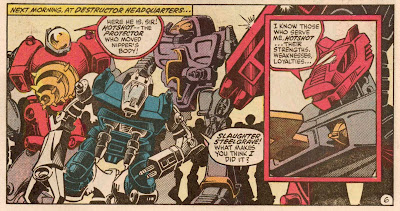 OK, now Simonson introduces the big bad Robot (who has lips), and I could give even more of a fuck if I could only find one lying around someplace. I'm having trouble remembering which robot is which and what the whole purpose of this is.

It's to sell miserable fucking toys. Which rumbles ugly my tummy.

But there is more. There is always more, isn't there?

Next we get a scene that sums up my entire reaction to this shit-fest. I think Simonson and Chen and Nocenti put it in as an inside joke – a wink and a nod to the intelligent reader (although I can't quite come up with a reason as to why an intelligent reader would be reading this) – or maybe just as an atonement moment where they fully come clean that they KNOW how bad this fecal fountain of a comic book is that they are creating.

No vibes in this garbage. No, it's not right. It's one big pile of shit. And it continues.

There's a totally stupid, lifeless, chase or something with the bad robots hating on the good robots (because that's what they do, isn't it). 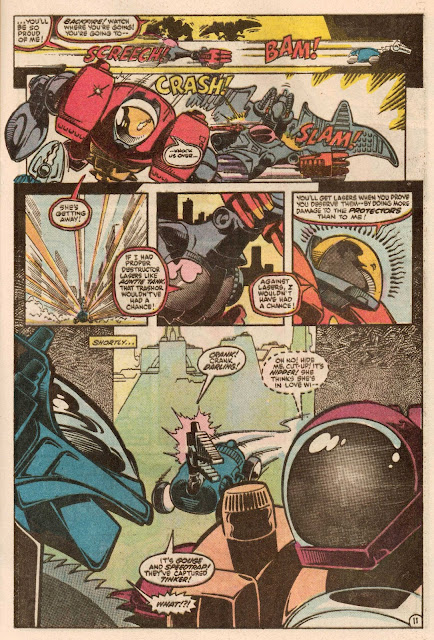 Then the good robots muster up the electronic testicular fortitude to finally fight back because there are fucking toys to be sold. 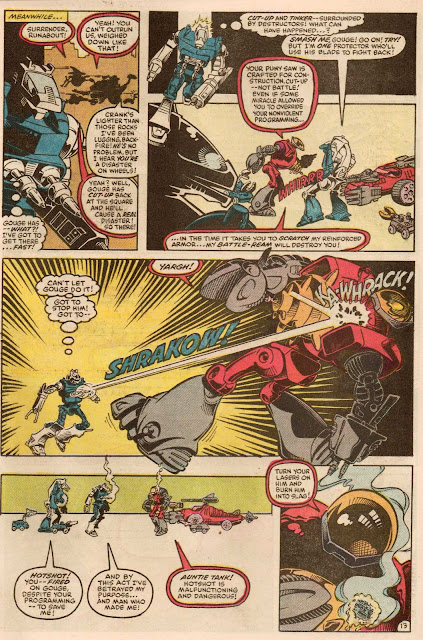 But I still can't tell who is who because the names are so meaningless and stupid and every fucking robot looks alike to me (although, I am sure that the marketing department would have told me that if I bought the complete set of toys, all of this would make so much more sense).

And then there is this fucking stupid thing: 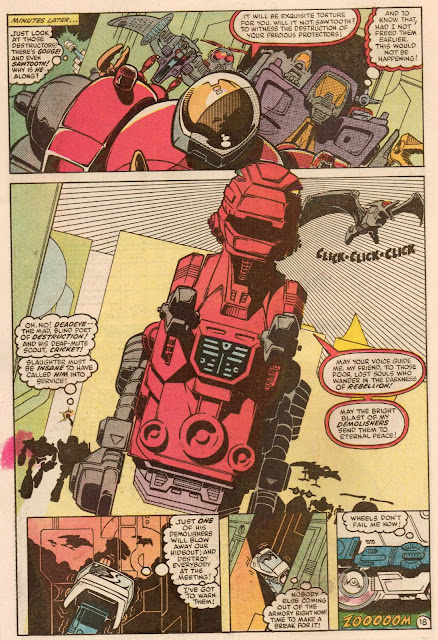 and any shred of credibility or dignity Simonson, Nocenti, and Chen were trying to hold onto is completely pissed away.

After this, Slaughter Steelgrave gets to get all self-righteous and “I'm the bad guy” whatever. 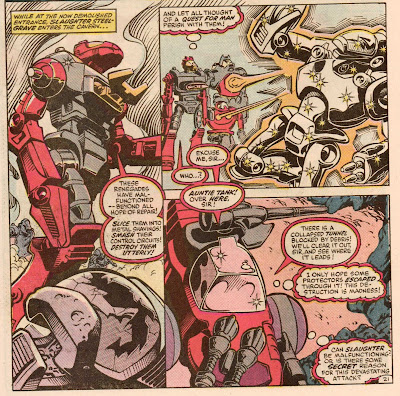 Thankfully the book ends and the good robots are off to go find the humans that made them and change the world and get out from under the the robot lipped grip of Slaughter Steelgrave and fuck..... who cares. 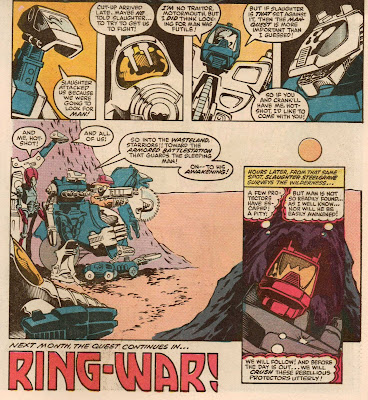 I hate this comic not only because I've wasted all this fucking time on it.

I hate this comic for a few other choice reasons:

First, it is confusing and uninspired and unimaginative and vapid. I can't even write clever things to make fun of it, it is that bad.

Second, Marvel Comics puts some of its better talent in an impossible situation, spinning straw into gold as it were (or, in this case, excrement into souffle), and not only does this beat them down as creators, but also takes their time and energy away from possibly creating something of real value while having to deal with this garbage.

Third: This is such a shameless, blatant attempt at a money grab on the part of Marvel Comics. The merits of licensed comics is a whole different conversation, but in this case it seems as if they don't even think enough of tie-in to try to disguise this fact. Licensed comics do have the possibility to be interesting or creative (as were the previously mentioned Rom and Micronauts), but you have to give a shit in the first place, and you have to have something to work with. Neither of these things were in play with Starriors.

Fourth: Why the fuck is this comic called Starriors? They are robots, made by people, and they live underground. Fucking marketing bullshit is what that is.

Fifth: I read this comic like three times now and each time it got worse and worse. I didn't think that was possible.

But hell, looking back at the end of last week's column, this was what I was wishing for, right? I wanted something god awful, something that truly deserved to be cast off and forgotten and buried deep in the bowels of the bargain bin.

Starriors #1, you are my wish come true.

Let's forget we ever did this, shall we?

When we think of Weezie from here on out, let's just remember Power Pack and X-Factor. When we think Ann Nocenti, let's think about Daredevil or Typhoid Mary.