Poets You Should Know -- Tim Seibles 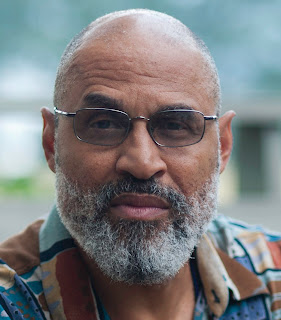 Tim Seibles (born 1955) is an American poet and professor. He is the author of five collections of poetry, most recently, Buffalo Head Solos (Cleveland State University Poetry Center, 2004). His honors include an Open Voice Award and fellowships from the National Endowment for the Arts and the Provincetown Fine Arts Work Center.

His poems have been published in literary journals and magazines including Callaloo, The Kenyon Review, Indiana Review, Ploughshares, Electronic Poetry Review, Rattle, and in anthologies including Verse & Universe: Poems About Science and Mathematics (Milkweed Editions, 1998) and New American Poets in the 90’s (David R. Godine, 1991).

Seibles was born in Philadelphia, Pennsylvania and earned his B.A. from Southern Methodist University in 1977. He remained in Dallas after graduating and taught high school English for ten years. He received his M.F.A. from Vermont College of Fine Arts in 1990. He is a professor of English and creative writing at Old Dominion University, as well as teaching in the Stonecoast MFA Program in Creative Writing and teaching workshops for Cave Canem. He lives in Norfolk, Virginia.

There is a schoolyard that runs
from here to the dark’s fence
where brothers keep goin to the hoop, keep
risin up with baske’balls ripe as pumpkins
toward rims hung like piñatas, pinned
like thunderclouds to the sky’s wide chest
an’ everybody is spinnin an’ bankin
|off the glass, finger-rollin off the boards
with the same soft touch
you’d give the head of a child, a child
witta big-ass pumpkin head, who stands
in the schoolyard lit by brothers givin and
goin, flashin off the pivit, dealin
behind their backs, between their legs,
cockin the rock an’ glidin like mad hawks—
swoopin black, with arms for wings—
palmin the sun an’ throwin it down,
an’ even with the day gone, without even
a crumb of light from the city, brothers
keep runnin-gunnin, fallin away takin
fall-away jumpers from the corner,
their bodies like muscular saxophones
body-boppin better than jazz, beyond
summer, beyond weather, beyond
everything that moves, an’ with one shake
they’re pullin-up from the perimeter,
shakin-bakin brothers be sweet
pullin-up from the edge of the world,
hangin like air itself hangs in the air,
an’ gravidy gotta giv’em up:
the ball burning like a fruit with a soul
in the velvet hands while the wrists whisper
"back-spin" an’ the fingers comb the rock
once—lettin go, lettin it go like good news—
’cuz the hoop is a well, Shwip! a well
with no bottom, Shwick!
an’ they’re fillin that sucker up.