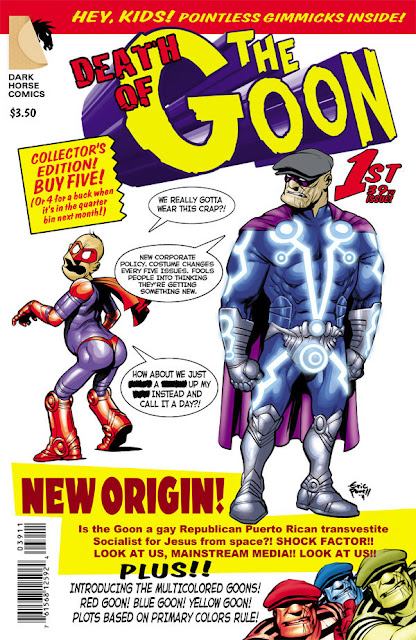 Djeljosevic: I don't know anyone who's not frustrated with the sad state of the comic book industry. My Twitter timeline is full of pros, would-be pros, journalists and critics who all seem to be one bad day away from rage-quitting the medium they've chosen to devote themselves to. And you can't really blame them, because, well, you've seen all the Before Watchmen promotion happening, right? Shudders all around.
I don't know anyone who's more vocal about the sad state of the comic book industry than Goon creator Eric Powell, one of those indie comics advocates whose creator-owned work overshadows his corporate comics work. And, with The Goon #39, it looks like we caught Powell on a bad day.
Elkin: I know, right? This is an absolute screed on the propensity of the Big Two comic publishers to vomit up formulaic garbage in a mad quest for profits at the expense of creativity. There is not a smidgen of subtly to Powell's assault here as he rams through and blows apart every tired marketing ploy and hackneyed cliché that infuses so many of corporate comics these days.
And, because it is Powell, it's hysterical. This rant is brilliant in its execution and sad in its truth and a real knife to the eye to the current state of Big Two's solicitations. But I don't think he is necessarily blaming Corporate Comics for the state of the industry.

Right on the first page of this book, Powell lays it all out:

Djeljosevic: It seems like Powell's criticism is two-fold: not only is the state of mainstream comics due to the Big Two's propensity for gimmicks, shock value and fanboy baiting, but many of the people making them are prone to cliché, laziness and general creative bankruptcy. I love that in Powell's comic-as-rant, nobody involved with the process is safe.
Elkin: I agree that he spares nobody. Although it does seem that pointing the finger (index maybe, not middle) at the very individuals to whom he is beholden, the comic book buying public, might be one of those shoot himself in the foot to spite his face kind of moves (if you can feel what I'm saying).
Then again, maybe Powell has resigned himself to the fact that his audience is already "in the know" and he is basically preaching to the choir on this one. And if that is true, then is The Goon #39 like some sort of small-town hipster art opening where only the friends of the artist show up, but only for the free beer and the opportunity to feel better about themselves by bad-mouthing everyone who doesn't "get" their scene (, man)?
Not to say that this sort of thing isn't fun. Especially the free beer. And The Goon #39 as a comic book is certainly as full of fun as it can be, but it does make me question Powell's motivation here and what he hopes to gain by publishing this.
Then again, this is the man who published Satan's Sodomy Baby -- so intellectualizing this in this manner may be the entirely wrong road to go down.

Djeljosevic: Chances are Powell is preaching to the choir on this one. I don't know how many readers who buy Green Lantern andAvengers also pick up The Goon, but I imagine if they're reading Powell's book, they're smart enough to know better than the DC Cretins or Marvel Zombies of the world. However, I wouldn't say he's slamming the average comic book reader so much as criticizing the publishers and creators for catering to the readers' base desires and creating the illusion of change to attract them to the usual well-worn territory.
I've been trying to figure out what Eric Powell's reasoning for putting out this issue could be besides it being a funny joke, and in that I think the most telling moment is the last panel, where Powell draws "classic" Goon with a wrench and an oncoming monster, accompanied by the caption "On second thought... I think I'll stick with this Goon." That leads me to believe that Powell needed to take a deep breath and re-evaluate -- he's an awesome artist who could probably make a whole lot of easy money drawing more of those Superman comics that the mainstream readers may be more familiar with instead of following his actual passions. I think, just based on this issue, Powell needed to list all of the mainstream practices he'd have to participate in just to make an easy living as a comics creator.
Either way, what makes The Goon #39 an enjoyable read rather than an insular auto-critique or "us vs. them" kind of screed is Powell's sense of humor. He's not afraid to talk some shit, but he's also willing to goof on himself a little and make his characters into completely cartoonish farces. No matter what his reasons for making this issue are, the comedy really sweetens the pill.

Elkin: Damn, Djeljosevic, I think you hit the nail on the head (or, in this case, the Thunder Hammer on the Codpiece of Power), and the more I think about this, the more I have to agree with you.
I've known many creative people who go through a "financial crisis of consciousness" and wonder why the hell they continue to toil away in relative obscurity and poverty in the name of their art. Some of them have embraced corporate culture and have gone on to do some interesting things with their lives (though they tend to carry a certain wistfulness about themselves and are prone to tell stories about their past -- especially after the fourth martini). Yet there are a few of them that make the list of what they must embrace to "succeed" and, like Powell does here, find themselves looking again at the meal they ate hours ago, but this time it has a much runnier consistency, a foul smell, and is floating in the toilet.
These folks, the one's that stick to their own creative vision, are the one's that, through this process, rededicate themselves to their art and start producing some pretty amazing stuff. I can only imagine where Powell might go from here after having puked up The Goon #39.

Danny Djeljosevic is a comic book creator, award-winning filmmaker (assuming you have absolutely no follow-up questions), film/music critic for Spectrum Culture and Co-Managing Editor of Comics Bulletin. Follow him on Twitter at @djeljosevic or find him somewhere in San Diego, often wearing a hat. Read his comic with Mike Prezzato, "Sgt. Death and his Metachromatic Men," over at Champion City Comics and check out his other comics at his Tumblr, Sequential Fuckery. His webcomic The Ghost Engine, with artist Eric Zawadzki, updates twice a week.