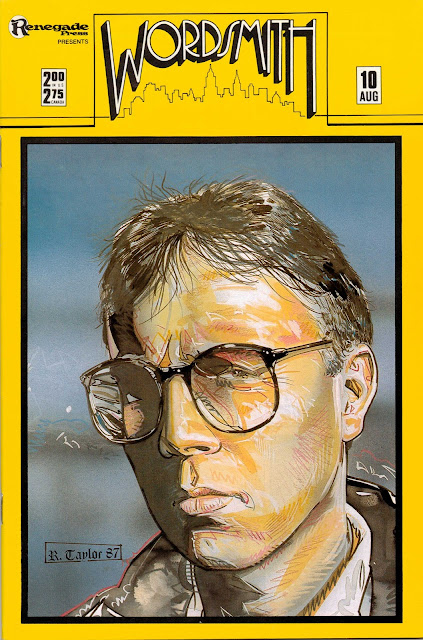 You thought about having the Time of Your Life, didn't you? You are the kind of person who could never forget Johnny and Baby going all Romeo and Juliet on the dance floor.

No wait, you remembered being hot, sticky sweet, from your head (head!) down to your feet.

Or were you waiting for the whole world to answer right now just to tell you once again who's bad?

There may be a few of you out there who are still have the dark memories of mourning since August of 1987 when Clara Peller asked for the final time before shuffling off her mortal coil, “Where's the Beef?”

Of course, if you are like me, you think of August of 1987 and you want to “get 'em all jacked up on whiskey” and then, after careful consideration, “turn the mad dog loose.”*

After today, though, I hope that when someone asks you to think back on August, 1987, you will fondly remember it was when Renegade Press published the tenth issue of their black and white comic book, Wordsmith, as it is the little gem that I pulled out of the bargain bin this week.

A quick history note via Wikipedia (thank you) about Renegade Press. This was a comic book imprint that was started after publisher Deni Loubert divorced Cerebus creator Dave Sim. I'm assuming that the separation was a bit acrimonious, as all of Aardvark-Vanaheim's titles (except, of course, Cerebus) left to go with Renegade.

Wordsmith itself was written by Dave Darrigo, who in 2010 was inducted into the Canadian Comic Book Creator Hall of Fame at the Joe Shuster Awards. The series lasted for twelve issues, got some rave reviews from the likes of Harlan Ellison, and was apparently reprinted TWICE by Caliber Comics.

I was intrigued how a book that seemed to have a lot going for it ended up rubbing ink with the likes of Ogre and Whisper.


So I opened up the book and dove in and was confronted with this: 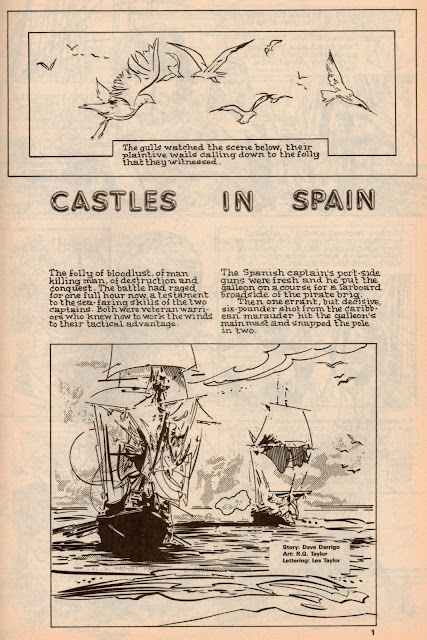 Wait. That's really ugly. I think I am starting to understand why this book was sloughed off as detritus. What the fuck is going on?

There seems to be some sort of pirate story occurring – pirates attacking a Spanish ship? There's some sort of mutiny being plotted aboard the pirate ship. There's an awful lot of words. Pages and pages of words and the lettering is atrocious, almost unreadable. The art is kind of flat and devoid of much life. Yeeesh.

It seems like the mutiny is successful when some guy named Torrance finally kills the Pirate Captain and takes over his ship??? 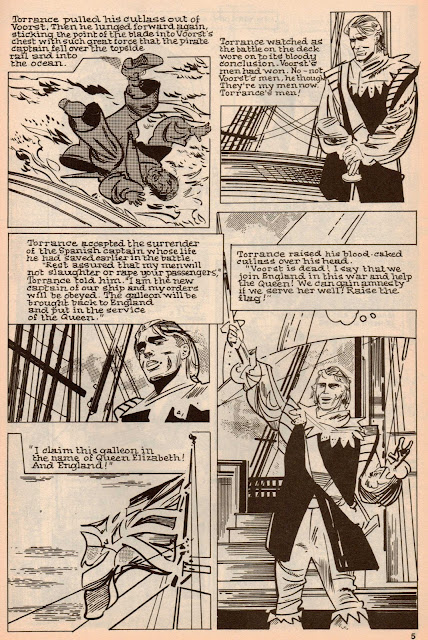 Now the pirates aren't pirates anymore, but rather are going to be part of the British Navy and help them in their war against Spain?

And there's just sooooo many words on these pages. It's like reading a Prince Valiant comic, if Hal Foster had spent three long nights, covered in his own filth and snorting crank through a bendy straw. Maybe this is why Wordsmith ended up in the bargain bin? It's almost too much. 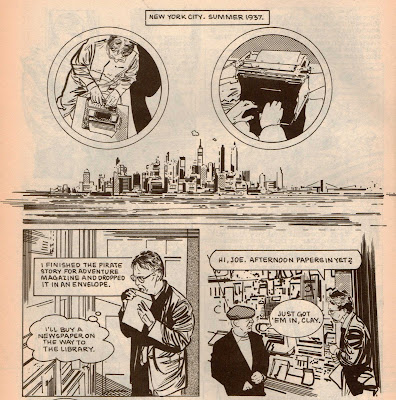 New York City, 1937? You mean the first FIVE FUCKING PAGES of this comic were just the “Pirate Story for Adventure Magazine” that this bespectacled slouch had been writing? Way to really pull in the reader, Darrigo. I was just about ready to start using this book as kindling. You've got a lot of work to do if you want my good will back, buddy.

But you do it, don't you? You do it in a wonderful way. 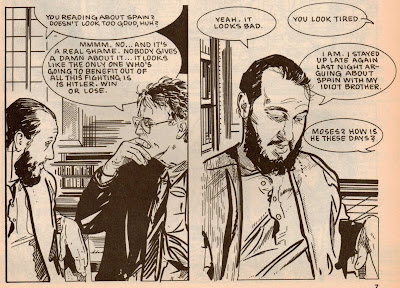 Clay has gone to the library to read about World War I to research the pulp war novel he is writing, The Dirt of Heaven. In the library he runs into his friend Asa, and they spark up a conversation about the Spanish Civil War. You remember that one, don't you,when the right-wing Nationalists led by General Francisco Franco (supported by Hitler) sought to overthrow Spain's left-wing Republican government (supported by the Soviets)? It was sort of a test run for World War II, and many American lefties headed off to Spain to show their support for Russia and try to staunch the spread of Fascism in Europe.

Asa's brother, Moses, was one of these American lefties.

Asa asks Clay if he would come over to their house to try to talk Moses out of going to Spain. Over a home-cooked meal, Asa and Clay debate the merits of risking one's life for an idea. Moses never comes home and Clay leaves realizing that he probably wouldn't have talked Moses out of going anyway, as he himself would “be willing to give up (his) life to stop a lunatic like Hitler.”

The next day, Clay heads out to his corner newstand looking for some new magazines. Joe the newsman directs his attention to the new “Funny Books” he's started carrying. As Clay thumbs through an issue of Detective Comics, Joe tells him that it's just a passing fad and that people still prefer the Pulp Stories, like the ones Clay writes.

Clay then says this: 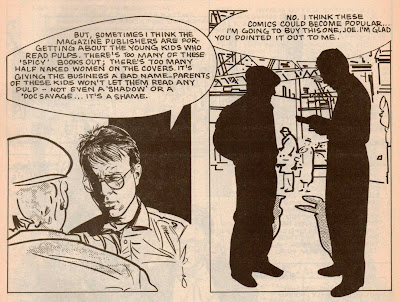 Clay is all into these new Comic Book thingys, to the point where it's all he wants to talk about on his date with his fiancee, Nancy. Darrigo piles on the words in the next few pages, as Clay interior monologues about comic books and how supportive Nancy is of his ideas. Some of what he writes is, in this context, really quite beautiful.

For example, Clay compares the feelings he had for a former girlfriend to the allure of a beautiful flower.

This is what I would call a strong foundation for a relationship.

They run into Nancy's niece, Kelly, at the park and Clay picks her up. 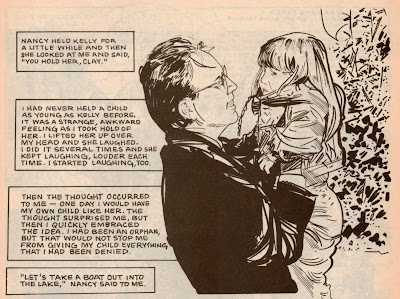 At this point in the comic, I've totally forgotten about that shitty pirate story beginning and I am engrossed in the character of Clay. He is sympathetic and dynamic and I am happy to be in his head. Everything about Wordsmith #10 is working at this point. The writing, while dense, is engaging, and R.G. Taylor's art is detailed and provides enough of a focal point that I am not overwhelmed by the amount of words on the page; they seem to almost blend in with each panel.

Back to the story, though, and a few days have passed. Asa's brother, Moses, contacts Clay on the phone and tells him that nothing will stop him from going to Spain to fight the Fascists. Clay calls Asa who just wants to say goodbye to Moses at this point, but can't find him anywhere. Clay suggest that they go to The Hall of the American Communist League. 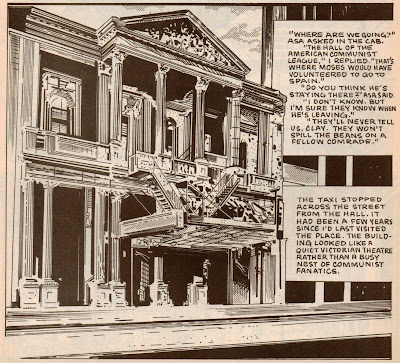 Like I said, Taylor's art is pretty damn impressive.

Inside the Hall, Clay and Asa get into it with one of the guys in charge. Moses has told this guy that he does not want to be found by anyone, and refuses to listen to any arguments against why he should not go and fight for his ideals. The Communist guy honors and respects Moses' wishes, even in the face of Asa breaking down in front of him, begging him to let him say goodbye to his brother. At this point, Clay finally loses his cool. 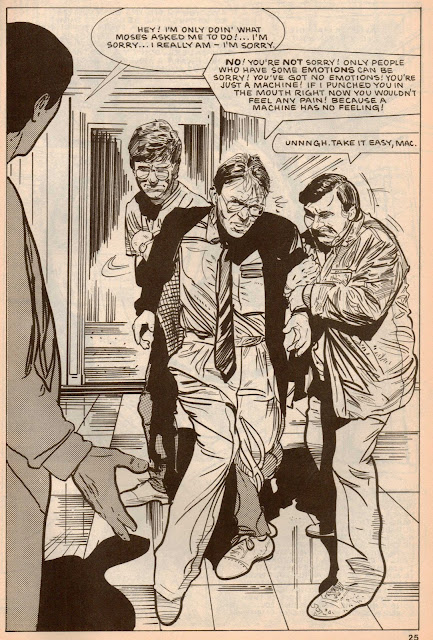 It's an emotionally charged couple of pages with each side making their points dramatically. It becomes a back and forth between ideals and emotions, love and honor. It's great stuff.

Asa and Clay are eventually thrown out of the Hall. Back at Asa's house, Asa's mother gets a phone call from Moses telling her goodbye and letting her know that he is leaving in an hour and that he loves her very much. She tells him how proud she is of him.

Clay and Asa race down to the docks to try to see Moses to tell him goodbye. 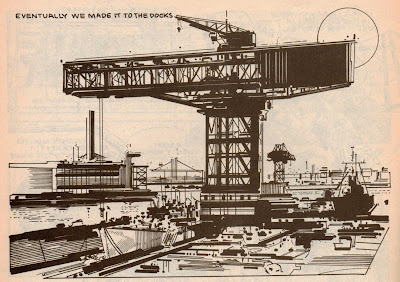 Of course they are too late, as the boat has just left the docks.

They think they see Moses waving to them from the ship, and then we get the last page of the book. 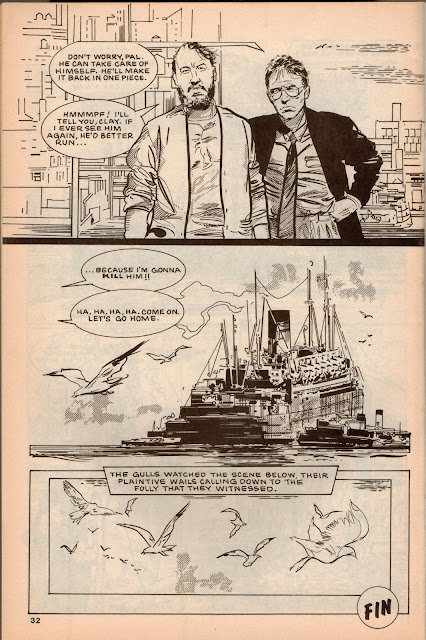 Do you see what they did? The last panel of the book is the same as the first panel of the book. It's a gull sandwich as it were, and it ties the whole thing together. While I knew that the whole shitty pirate thing was a set-up for the rest of the story in Wordsmith #10, this subtle little return at the end masterfully connects the whole book into one story.

We fight for ideas. We hold on to ideals. We love each other with nourishing passion. We tear each other apart over and over again.

Wordsmith #10 does a fine job of reminding us of all of this.

So the bargain bin? What the fuck? Really?

What the hell is going on? That's two weeks in a row now that I've come across these comic books that are fantastic, but are now languishing unwanted, unnoticed, unloved, there in the bargain bin. What the hell happens? How do we lose track of these books? What does it say about a culture that spawns these artistic moments and then disposes of them without a second thought?

It's just part of the human story, isn't it?

I am starting to wonder what's more depressing: Finding monumentally crap comics festering in the bins, wondering how the hell these things even saw the light of day, and then having to write about them, or finding these beautifully executed, honestly fulfilling books that we've all just cast aside in our quest for something newer and shinier and trying to figure out why that has occurred?

I'm thinking that the later is the sadder of the two exercises.

Hopefully next week I'll pull something truly awful out of the bins.

I'll see you then.

*Just in case you are not like me, this is what I am referring to here: