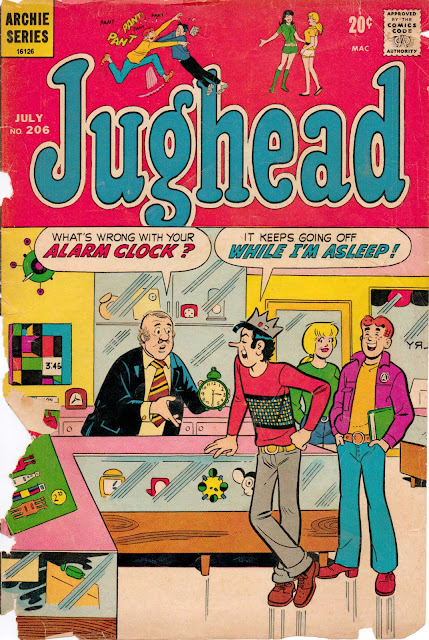 IS THERE ANYTHING MORE DUMB-THICK-STUBBORN THAN A GUY WHO WON'T TAKE HIS BEST FRIEND'S ADVICE!
So, as I mentioned in last week's column, I bought some old comics off ebay from Too Much Coffee Man's Shannon Wheeler. Though they are not technically randomly pulled from the bargain bin, they are awesome, truly Cheap Thrills, and they will be the subject of the next couple of weeks of columns. I am still singing the song: It's my column. I can do what I want to.

This week's choice from Wheeler's Wonders comes from July, 1972.

The summer of '72 was a time full of tension. Hanoi Jane Fonda was photographed sitting on a North Vietnamese anti-aircraft gun. George McGovern was nominated for President at the Democratic National Convention in Miami Beach, Florida. A ceasefire between the British and the IRA collapsed after British troops killed five people (three of whom were teenagers) in Belfast. The Nixon Administration started paying off the Watergate Burglars to keep them quiet (ultimately paying them almost half a million dollars).

George Carlin was arrested in Milwaukee, WI for doing his “Seven Words You Can Never Say on Television” bit.

Like I said – there was tension in the air in July, 1972. Brilliant photographer Diane Arbus killed herself. Bobby Ramirez (drummer for Edgar Winter's band) was stomped to death in a Chicago bar because his hair was too long.

Also in July of 1972, seemingly as a response to all this tension, David Wong of Eli Lilly found that fluoxetine seemed to inhibit uptake of serotonin without uptake of norepinephrine. Thus was born Prozac.

The country seemed like it was coming apart at the seams there in July of 1972. Thankfully, Archie Comics had the proper panacea. This was when they chose to publish Jughead #206. After this choice was made, America went back to feeling groovy and One Million Moms let out a collective sigh.

Jughead #206 is divided into a number of short vignettes, all highlighting the adventures of Archie's pseudo-beatnik buddy, Forsythe "Jughead" Pendleton Jones III . The first of these vignettes is titled “Bookworm,” and it opens with a two-panel page in the library. 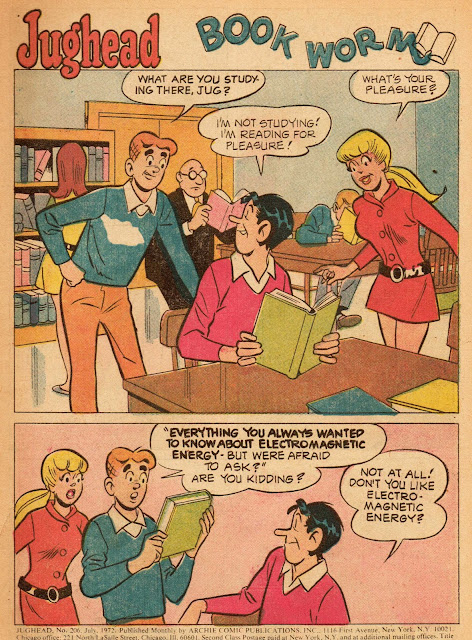 Jughead is reading Everything You Always Wanted to Know About Electromagnetic Energy – But Were Afraid To Ask. I am tempted to make an Insane Clown Posse joke here, but I have been informed by my son that this meme has been beaten to death – I also will refrain because I have an abject fear of being beaten to death by Juggalos.

Archie, suspicious of Jughead's ability to comprehend anything more complex than a hamburger, is confused by Jughead's choice of independent reading. 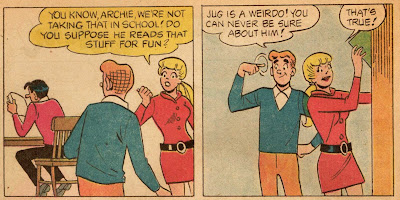 This is followed by a series of “Don't talk loudly in a library” jokes, which culminates in Jughead asking the librarian where he can find a copy of Mother Goose. This juxtaposition between advanced science texts and nursery rhymes further baffles Archie. As sense making beings, when we are confronted with things that appear to be outside of our ability to order and label, we become confused. The human animal, when in a state of confusion, tends to become aggressive. Archie Andrews is no exception. Neither is Betty Cooper, for that matter.

I honestly don't understand the ferocity of Archie's anger in this situation. I am reminded, though, that comedy, especially comedy targeted for a younger audience (which, I assume, is what the Archie Comics juggernaut is targeted towards), needs to be writ large in order for it to be effective – especially in 1972.

Anyway, as sense making beings, Betty and Archie need to put pieces together in order to alleviate the tension their confusion has wrought, so they follow Jughead out of the library in order to see what it is, exactly, he is up to. They follow him to the County Hospital wherein they find him entering the Pediatric Ward.

Finally, all their questions are answered: 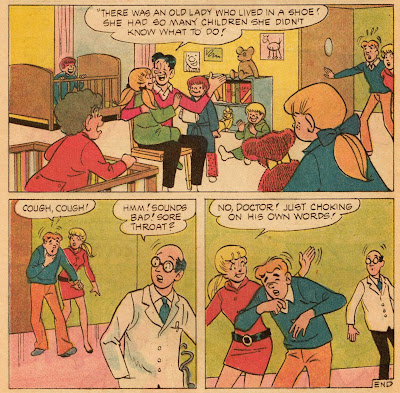 Well.... that's sweet and all, but I kinda miss the joke. I assume this is supposed to be funny in some manner, but the sight of Jughead reciting nursery rhymes to sick kids kinda pops the humor bubble in a big way.

Wait a minute – maybe this is not a joke at all? Maybe this is social commentary, dare I say satire? Is the writer of Jughead #206, Frank Doyle, trying to convey to his audience that, as social beings, we must refrain from being selfish creatures, always thinking of ourselves. Isn't Archie and Betty's anger really a manifestation of their own insular world view? Isn't their inability to predict Jughead's altruistic motives for his behavior a reflection of their own self-absorption? Is Doyle trying to tell his audience that we must, first and foremost, be more empathetic in our dealings with others or else we will end up choking, not only on our own words, but on our own ability to progress as a society? Is he condemning our bigotry and hatred in the face of things we don't understand? What would One Million Moms say?

Or maybe I just don't get the joke...

The next vignette in Jughead #206 is called “Tell Them Juggie Boy Was Here” and it opens with a dialogue heavy splash page featuring some off-kilter perspective. 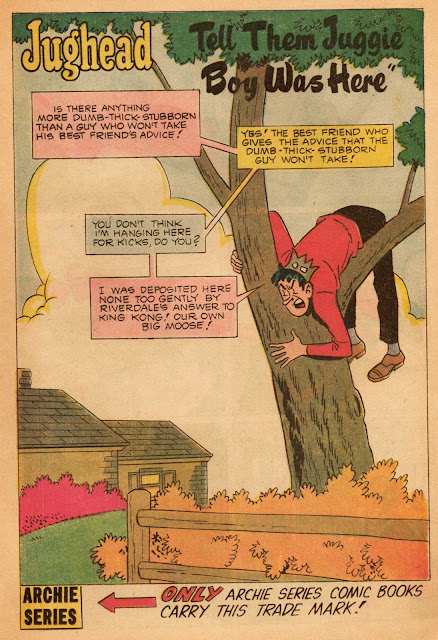 Here, Jughead raises the age old question: “Is there anything more Dumb-Thick-Stubborn than a guy who won't take his best friend's advice?” Who hasn't asked themselves this very question, especially in the bar at last call when your friend has suddenly begun showing amorous intentions towards a person that you know he or she will regret waking up next to the following morning.

From his perch in the tree, Jughead begins to produce a litany of the number of times he has helped out his buddy Archie. These include stopping him from walking out in front of cars, to staying out of the rain; from (my personal favorite) 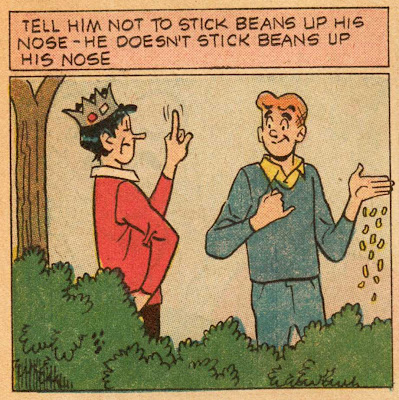 to not taking wooden nickels. Jughead, much like an effective governmental system, has always been there to protect Archie from himself – to keep him from harm due to his inability to foresee the consequences of his actions.

When it comes to women, Archie (according to Jughead) “goes bananas, right out of his little ol' red thatched skull!”

Then we get this panel: 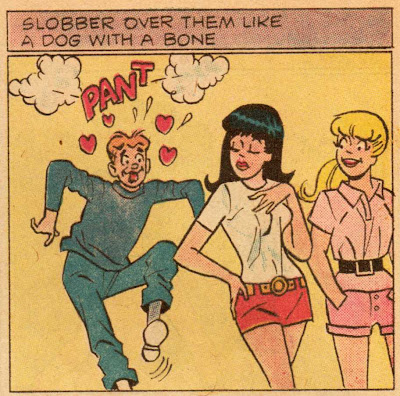 In the fifty or so columns I have written about Bargain Bin Comics, every once in awhile there is a panel in one of these books that is so spectacularly ripe for taking out of context that it is all I can think about while writing. This is one of them. I'll let you make your own jokes.

This story ends with Archie making the moves on Midge, who is the girlfriend of Big Moose. Jughead tries to protect Archie from making this catastrophic mistake by forcefully removing Midge from Archie's purview. Unfortunately, Big Moose happens to see Jughead pushing Midge from behind and he gets the wrong impression – thus Jughead ends up in the tree.

In six pages we not only get an insight into the nature of Archie's sexual addiction, but we also get an interesting screed as to both the benefits and consequences of what happens when we are unable to take care of ourselves and leave our well-being in the hands of some larger entity.

Once again, I am convinced that writer Frank Doyle is pushing an agenda here. He is commenting on how an effective government is necessary to keep social order, as well as keep us from causing inadvertent harm to ourselves. I mean, thank goodness for all those warning labels on ladders nowadays – without them, I am sure to have some gravity induced mishaps to my detriment.

This is the price we pay for being unable to stop ourselves from putting beans up our nose.

The final story in Jughead #206 that I want to address is called “Spring Fever.” 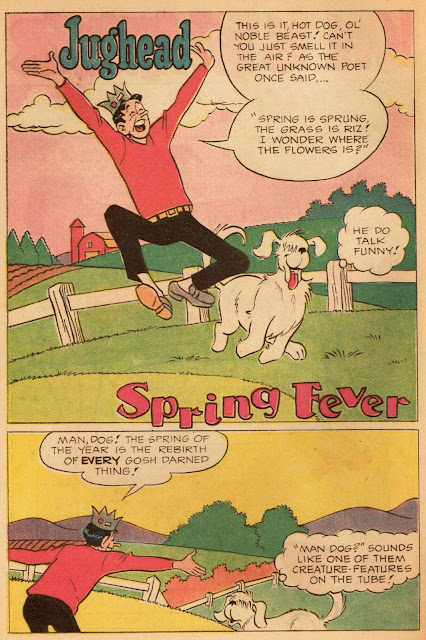 This story is a celebration of the fecundity of Spring – akin to the opening lines of Chaucer's Canterbury Tales, it is filled with paeans to the rich and teeming possibilities of the season of renewal. Jughead travels the land around Riverdale, leaning and loafing at his ease, a modern day Walt Whitman, singing songs of celebration to the birds and the brooks and the berries and the very soil itself. “Spring Fever” is an ode to the future of the land and the people who inhabit it. Jughead waxes poetic, “In the Spring the sap runs in the trees and bushes!”

Then there is this panel: 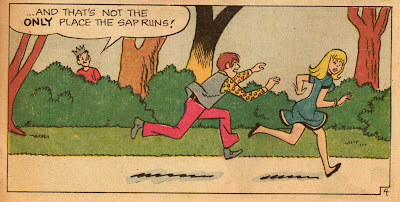 Oh, man. Like I said, sometimes the panels write the jokes for me. I feel a bit puerile pointing this out after spouting off about the Chaucer-esque sensibilities of Jughead's Whitman-like free verse, but a spooge joke is a spooge joke, and sometimes you just have to get out of the way and let it fly.

The story ends with Jughead congratulating himself for having avoided the “pairing off” that so often occurs in Spring between couples in love. 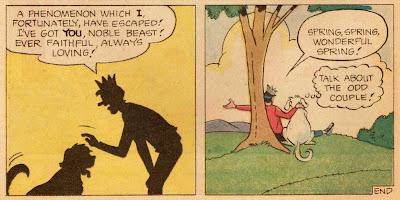 Jughead is not one to get tied down in the complications of a romantic relationship. He is the independent sort. He's the disillusioned American hero of the Hemingway novels. He doesn't need anything. All he needs is his dog.

In his Item Description for this comic over on ebay, Shannon Wheeler wrote:

“Jughead no 206 from July 1972. "What's wrong with your alarm clock?" "It keeps going off while I'm asleep." Ha. Classic. Anyway. I threw it for sh•ts and grins. The cover is falling off but whatever. “

As a sometimes subtle social critic himself, what Wheeler failed to mention was how this comic dealt with the larger issues of its time – in a manner that transcended its time and still resonates today – along with its “ sh•ts and grins.” But that's because Wheeler wanted someone to discover this fact on their own – someone like me – because in that act of discovery the material becomes a personal experience and therein carries its power.

Like all pieces of great American literature, it takes a different kind of reading to fully appreciate why it resonates with the eternal rhythms of the human experience. In one of the more famous passages in American literature, Willa Cather writes in her novel O Pioneers!, "Isn't it queer: there are only two or three human stories, and they go on repeating themselves as fiercely as if they had never happened before; like the larks in this country, that have been singing the same five notes over for thousands of years." Jughead #206 tells these human stories, and we are all the better for it.

I would think that One Million Moms would agree.

Then again – I could be over-thinking this whole thing, just because I didn't get the joke.

Oh well, see you next week.