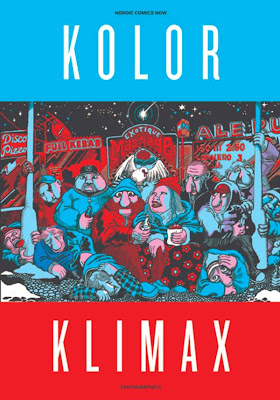 How do I know this? I know this because I just finished reading Fantagraphics new anthology, Kolor Klimax. This 250 page full color soft covered book, edited by an equally odd Matthias Wivel, features the works of twenty-two comic artists from Sweden, Denmark, Finland, and Norway, none of whom seem to have anything in common except for a penchant to present their own personal idiosyncrasies.

And there is some wild stuff in this anthology. From Bendik Kaltenborn's “The Great Underneath,” a surrealistic story featuring a biography of Meatloaf, a man in an orange suit, and a talking dog, to Peter Kielland's wordless black and white comic called “Mr. Pig in 'I Own the Night'” which deconstructs the endless drudgery of a nine-to-five existence in a manner that filled my head with liquid thoughts, this anthology is all over the place in terms of themes, styles, and sanity.

There are some particularly stellar pieces in this anthology, though. Of particular note are Johan F. Krarup's “Nostalgia,” which is a wrenching tale about a man in crisis told in an almost emotionless manner; Mikkel Damsbo and Gitte Broeng's “Relocating Mother,” a rumination on the power of place and identity; Christopher Nielsen's “Escalator,” a visceral metaphor for the role fear plays in maintaining the status quo; and Joanna Rubin Dranger's “Always Prepared to Die for My Child,” to which any new parent can easily relate.

Then there are pieces like Kolbeinn Karlsson's “100,000,000 BC,” which is a full color hallucinatory highway of mind-fuckery that will be one of those things that will flash into my consciousness at highly inappropriate times for the rest of my life – and I don't say that as a good thing. There is also Tommi Musturi's “Samuel,” which is broken up into three parts, appearing in each third of the book. For the life of me, I can't figure out why the editor made this choice given how disturbingly odd (yet unnervingly engaging) the piece is. It must have something to do with that unique Nordic sensibility. Either that, or taken in one sitting, “Samuel” might just make your head explode.

I would have given Kolor Klimax a higher rating than I did if it were not for the unevenness of the presentation. There is some amazing comics in this collections, but sometimes the juxtaposition of one comic following the other was so jarring that it completely took me out of the reading experience. That's the nature of anthologies, though, I guess.

If you're tired of traditional comic book fare and are looking to expand your horizons in your comic reading, Kolor Klimax is a pretty good place to go. After all, I can't imagine that your local comic shop stocks too many Nordic comic books on its shelves, and this anthology may be your only available on-ramp to a whole different world of comic book possibilities.

Here's a sneak peek into Kolor Klimax presented by the fine folks at Fantagraphics: