This Review Originally Ran on Comics Bulletin.
It was an advanced Tag-Team Review I did with Jamil Scalese 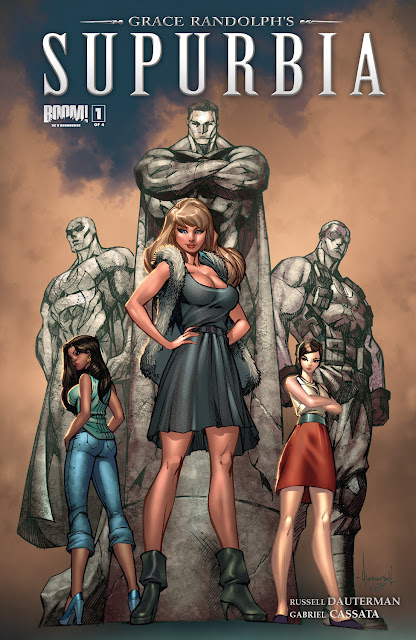 Jamil: I cut bullshit. That's just who I am. I don't think I could do this comic reviewing thing without having that quality. So, I want to be completely frank with the audience and I say that when Daniel and I read the solicit for Supurbia we weren't exactly excited at the prospects of reviewing this new book from BOOM! Studios. Here is that solicit for curious parties:

What goes down when the capes come off? Meet the "Real Housewives" of Earth's greatest super-team, the Meta Legion! It's the egos, the tantrums, and the betrayals of the super set. Find out what happens behind the masks as superhero families are faced with the sordid problems of everyday life - and then some! From rising star writer Grace Randolph (Marvel’s NATION X, HER-OES) and hot new artist Russell Dauterman, this series takes the familiar super-team and turns it on its head with a scandalous, TMZ-fueled look at what it's like to live with a superhero!

Not badly written, but words phrases like "Real Housewives", "TMZ-fueled" and "the sordid problems of everyday life" don't exactly whet my palate. I read comics to escape that shit. The title seemed like another attempt to garner female readers by pandering to things executives think they like. I wasn't expecting much.

I was wrong. Supurbia is a delightful read with a seemingly rich mythology and a roster of enchanting characters. 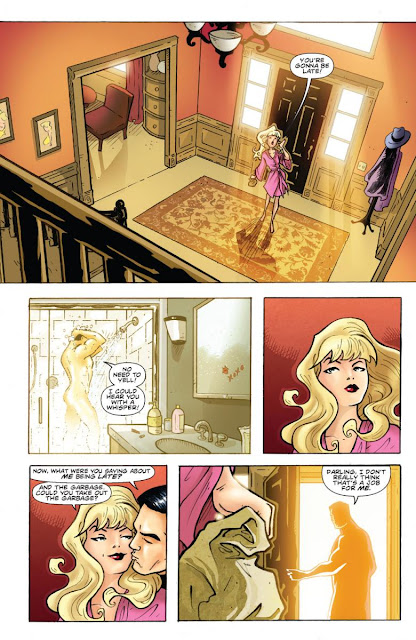 Daniel: Yeah, when I read that solicitation, I believe I responded with something about puking in my mouth a little. Still, I went into this thing with an open mind and... well... I don't know, Jamil, when I hear you use the word "delightful" I tend to think of things that are full of delight (or even Deee-Lite -- for the groove, as it were, is in my heart).


I really didn't find all that much in Supurbia to spur delight. Sure, the pacing was fine, the dialogue was okay, the art was serviceable, and the ending did leave me with a slight pang of interest to find out what happens next... BUT (there is always a "but," isn't there, especially on Lady Miss Kier) haven't we read this comic before someplace? All the tropes are there in terms of the superheroes -- a repressed homosexual, a hero with a god complex, an Amazon having a hard time fitting in -- ho-hum, ho-hum, same old, same old. I guess this book is attempting something new by focusing on the spouses of these heroes, but I'm not really sure how engaging that perspective will ultimately be. Or maybe I'm missing something. 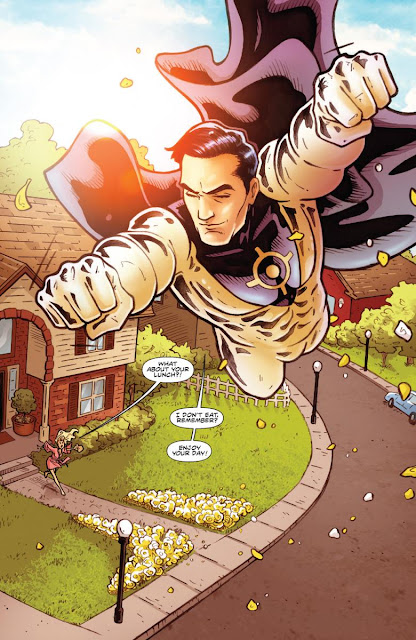 Jamil: Well, I think you nailed what I loved so much about it: it's a fresh perspective on an old, worn concept. This is not a comic about the overpowered Superman, a gay Batman or the awkward Wonder Woman, it's about their significant others. Randolph is essentially putting Lois Lane, Steve Trevor, Pepper Potts and Dr. Girlfriend in a cul-de-sac and going about business as usual. I guess what I appreciate about the script is that all the "tropes" are succinct, obvious and direct. No time is wasted worrying about the particulars of The Cosmic Champion, instead I found my interest wandering to the inquisitive and insistent Eve White or the domesticated adventurer Jeremy Metzger. However, we definitely agree on one thing: the art is pretty pedestrian. Russell Dauterman's technique is sound, but his style is a little too PG for a PG-13 story. 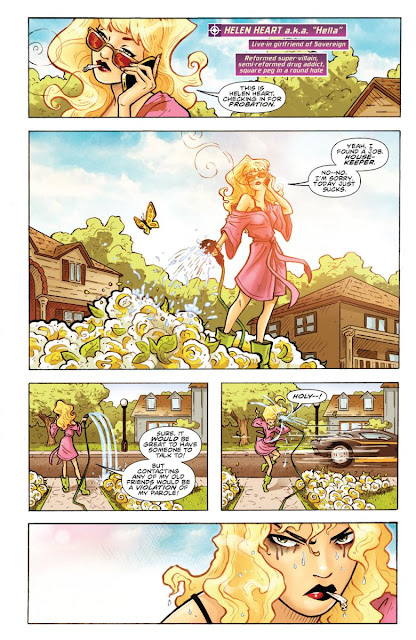 Daniel: I agree with you there, Jamil. I would also like to point out Alé Garza's cover art. When you combine this with the solicitation, I don't quite know to whom BOOM! thinks they are marketing this series. It's a bit schizophrenic. It would seem to me that this type of story could easily be marketed to a "female audience" (and I hope I don't get in trouble for saying that), but the cover is all tits and ass.


Back to the book itself, I see your point about the merits of playing to the expected in terms of the secondary characters (the superheroes), as it does allow the reader more room to focus on the spouses (the heroes of this series). I guess we will have to see how this plays out, but it does seem that these characters are also kind of predictable. I think I can tell you exactly how this whole story's plot is going to unfold, just from how the main characters are initially characterized. The super team is going to be sidelined and the plucky spouses will have to save the day. Helen Hart will show that she is worthy of redemption, Alexis will learn to love herself, Eli will prove himself worthy of his mother's love, etc.. etc...


I guess that's why I give this title a 3 out of 5. It has an idea that could be interesting, but I just don't see it yet. This is a four issue mini, though, so it better get interesting quickly. 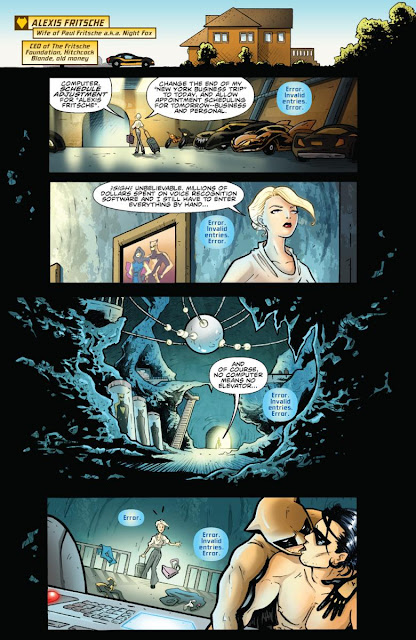 Jamil: For the purposes of a first issue I am very impressed at what Supurbia offered. Superhero titles outside of the Big Two are always a tough sell, but for whatever reason this one manages to capture my interest with good flow and clever use of clichés.

I'll give you that the narrative path appears predictable, and hopefully we get a third act twist to spice this thing up. I'm giving the first issue a generous rating of 4.5 out of 5 because the creative team managed to turn me around on what I thought would be a shoddy premise.

Though, I think we can both agree: it didn't make us puke. That might be one of the best endorsements I've ever given something. 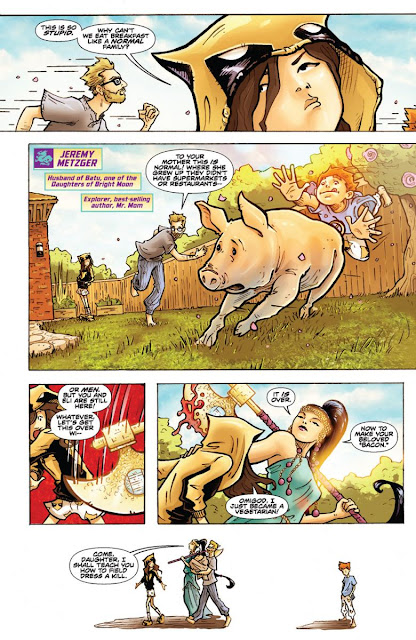 Daniel: Hmmm... I wonder if they might use that as part of their marketing campaign? I'm glad you're enthusiastic about this series, Jamil. I admire your ability to muster enthusiasm. I can barely even muster "thusiasm" these days. But that's my problem.


If Supurbia does pull off a third act twist and becomes something other than what I fear it is to be, then I would gladly add an "en" to my "thusiasm" and I'll buy you one of those "Hey, you were right" beers. If, on the other hand, it continues to trample the impacted dirt on this well-worn path it has set off upon, I'll be left with just "siasm" and I'll need that beer myself.


Daniel Elkin has been reading and commenting on comics since the mid '70s when he used to wear a great deal of brown corduroy. Currently he lives in Northern California where brown corduroy is slowly becoming fashionable again. Daniel has worked in bars, restaurants, department stores, classrooms, and offices. He is a published poet, member of MENSA, committed father, gadfly and bon vivant. He can over-intellectualize just about anything and is known to have long Twitter conversations with himself (@DanielElkin).


P.S. He keeps a blog, Your Chicken Enemy.