Poets You Should Know -- MARK CUNNINGHAM 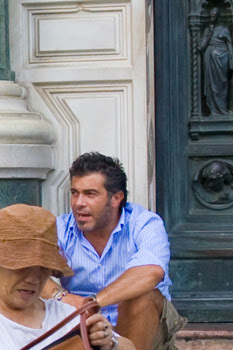 Mark Cunningham's poems have appeared in recent issues of Alice Blue and Dusie. He's had two chapbooks published, including one on the Mudlark Web site (2002) and one of the Right Hand Pointing Web site (2006). Tarpaulin Sky Press will be bringing out a book, tentatively titled Body Language, a sort of diptych containing two serparate collections, one titled Body (on parts of the body) and one titled Primer (on numbers and letters).


HAY
Every time, almost every time I put a biscuit of shredded wheat,
the big ones that come in four or six to a package, into a bowl and pour
milk on it, I watch the milk filter through the brittle chunk and think of
a bale of hay. Lion's-mane-tan. In a stubble field. Whenever I see a
bale of hay I feel the urge to bite into it, feel its dry scour, slightly
sweet. I could eat the cows that eat the hay but I don't like meat so I
think of big swirled cinnamon rolls, or remember that when I die my
body might crumple into soil that feeds the grass that becomes hay:
that's a difference between me and hay, I'll never know what becomes
of my body after I'm dead, I'm always before, but hay is after, hay
isn't hay until it's dead grass. Heraclitus was right, fire drives all things.
No wonder Monet painted hay, stack after stack in fields of snow, in
dry morning sun, in late afternoon slant, shine soaking into haystacks
and cathedrals, over and over, before he moved to the pond, the clouds,
all things moving, in flux. I like the haystacks best in late summer,
noon glare already starting to cool, warmth shrinking from general to
specific, I like the hay where a cricket calls, my hair in the sun. Po
Chu-i was glad to go bald, it was a weight, literally, off his mind, he
could see why Buddhist monks shaved their heads before starting on
the path away from all the things that were burning, burning, but the
only part of growing old I regret is that my hair is thinning, in a year or
two I'll become one of those men who sweep a long swath over their
bare scalp, fooling no one. Still, I'll be able to feel the sun in my hair
a little longer, warm and close, the way it must linger in haystacks
those mild afternoons after the first frost. That's why those men comb
their hair that way. I'm sure of it