Random Pulls from the Bargain Bin
THIS COLUMN ORIGINALLY RAN ON COMICS BULLETIN
In these economic times, finding inexpensive entertainment is difficult. Thank goodness for the local comic shop and a slew of comics nobody cares about anymore! Each week Daniel Elkin randomly grabs a comic from the bargain bin (for 50 cents) to see what kind of bang he can get for his two-bits. These are those tales.
November 23, 2011 – paid 50 cents for:
CAPTAIN AMERICA #393
Published by: Marvel Comics
Written by: Mark Gruenwald
Art by: Larry Alexander 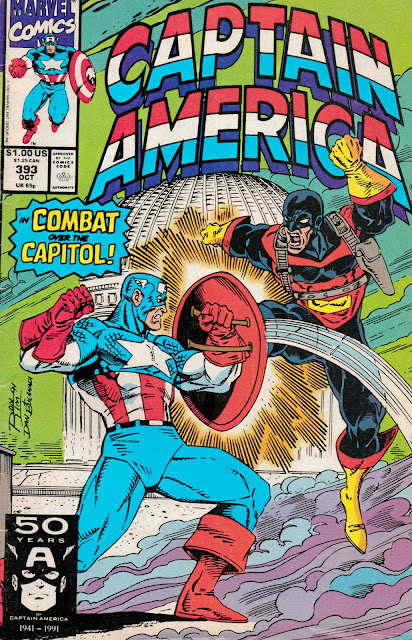 AS YOU MIGHT GUESS, THIS IS NOT THE REAL THING.
Politics and sex had never been such intimate bedfellows as they were in October 1991. This was when we all got to watch the U.S. Senate Judiciary Committee interview Anita Hill about Supreme Court candidate Clarence Thomas' alleged sexual harassment of her. Children all over the nation began asking each other, “Who has put pubic hair on my Coke?”

This was also the month that Arkansas Governor Bill Clinton announced his bid for the 1992 Democratic nomination for President.

Thomas was made Justice. Clinton became President. The nation's libido was rocking.

It is this last fact that will be the focus of this column, as it is Captain America #393 that I pulled out of the bargain bin (instead of, thankfully, the decaying corpse of Tennessee Ernie Ford). 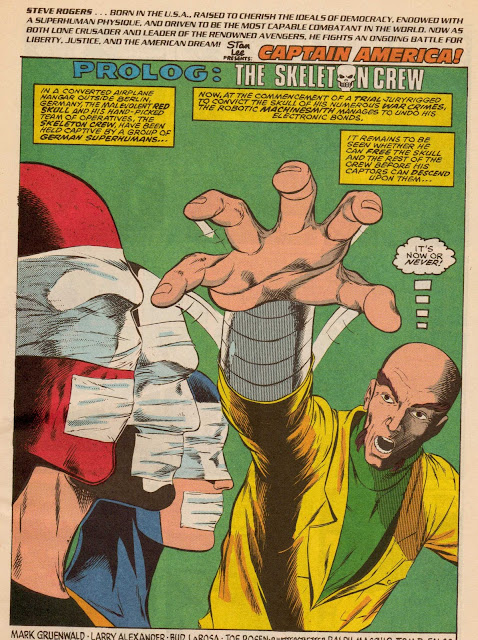 Captain America #393 opens with a splash that, in terms of perspective, kind of breaks my brain. Machinesmith (not to be confused with Machine Man) is standing before a green screen reaching out for my face.

Actually, what is happening is the Red Skull has been captured by some German Superhumans and is being put on trial for War Crimes in a converted airplane hanger outside of Berlin. Machinesmith, part of the Skull's “Skeleton Crew” (heh), has freed himself and is attempting to free the others. 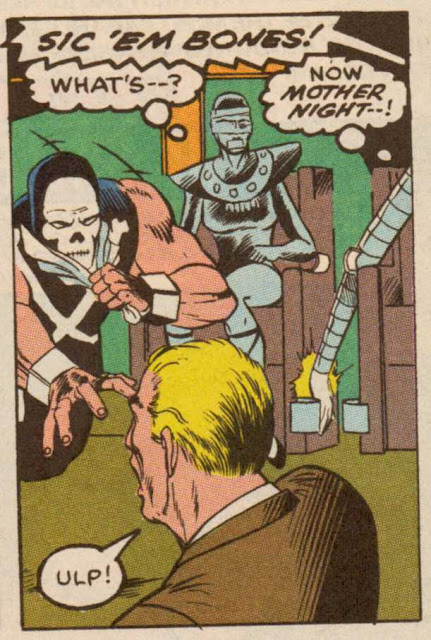 Now this is a line I would have loved for Kirk to have said in Wrath of Khan.

This bit of businesses is successful, and the rest of the crew is freed.

From what I can tell, the “Skeleton Crew” is made up of Red Skull, Crossbones, Machinesmith, and Mother Night. The German Superhumans are Lightning-Warrior, Zeitgeist, and Hauptmann Deutschland (Captain Germany). This is just for your information.

The Red Skull claims that this court is a “travesty of justice,” as he is not a German citizen, but an American. 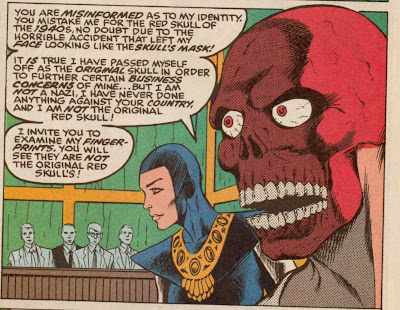 And a bug-eyed freak.

The Skull goes on about this trial creating an “international incident” and how they must allow him to return to America. 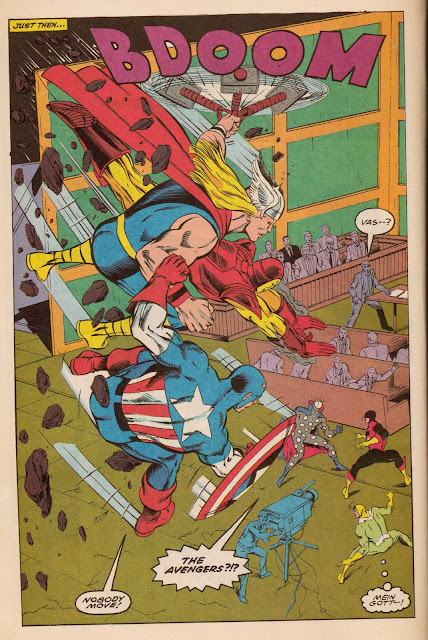 Captain America swaggers down the aisle spouting words like, “illegal” and “no jurisdiction” and “American Citizens” and “remand them to our custody.” Needless to say, everyone is a bit confused.

When Hauptmann Deutschland demands proof that Captain America is who he says he is, Cap goes into action. 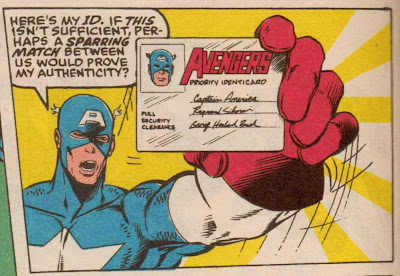 Oh my god. Did that really just happen? Captain America got carded?

Come on. I've heard the term “Card carrying member of the Avengers” before, but I didn't realize it was literal.

But somehow this is enough to convince Hauptmann Deutschland, who obviously would make a terrible bouncer.

The Avengers grab the Red Skull and the rest of the Skeleton Crew and pop them in their plane. As they fly off, we are left with Hauptmann Deutschland wondering about the protocol of this incident. He admits that he is unsettled about the whole thing.

Sometimes a Haupt should go with his gut. 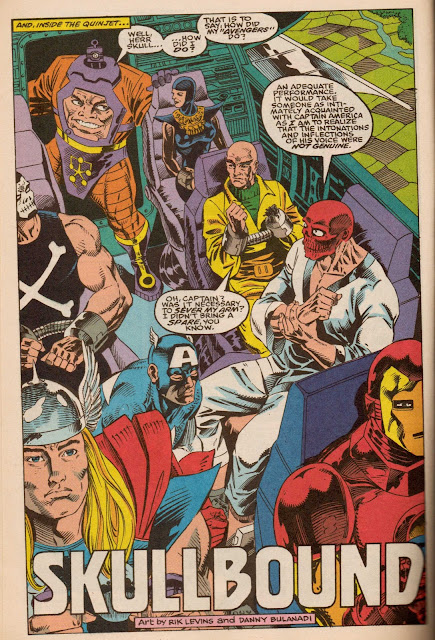 Arnim Zola? Damn, I had forgotten all about you. I love it when you dance.

The Avengers are actually Zola's Bioplastoids (but then again, aren't we all), and the Avenger's Aircraft? 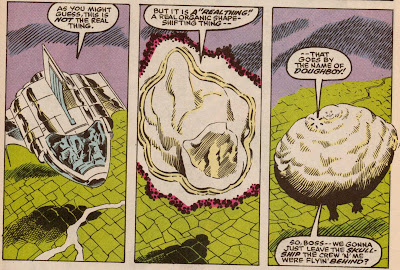 The comic then shifts focus (because that is what you do after Doughboy) to the Avengers Mansion where the REAL Captain America is chatting with Paladin about saving Diamondback from the Serpent Society (which was the previous six issue story arc according to “Back Ish Maccish” in one of those corner yellow text boxes that used to show up in comics all the time – I kinda miss those a little).

There's a whole bunch of reminiscing.

Then Diamondback makes the goo-goo eyes at Cap, who returns the goo with gusto. This is setting up some other story, I'm sure, but it is just kind of annoying in the context of this single issue.

Then Cap gets a call: 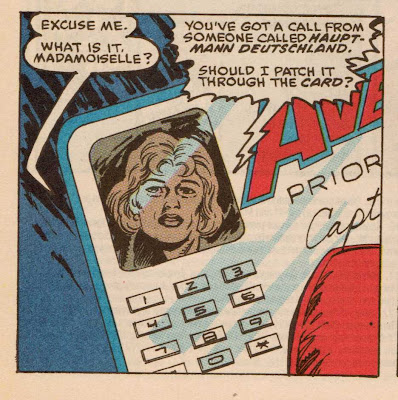 On his ID card? How the hell are you supposed to dial a number on that key-pad? With a toothpick?

Hauptmann Deutschland is calling to make sure the Red Skull got there “without incident.” Cap has no idea what he is talking about. Haupt yells, “Mein Gott! That accursed Skull!” and hangs up. Cap wonders if it is a prank call.

The comic then jumps to Washington D.C. to the offices of the Red Skull. He wants to change offices, as he no longer feels safe operating out of a building overlooking THE CAPITOL BUILDING.

Ummm...who rents an office overlooking the Capitol Building to THE RED SKULL?

When I read comics, I am very good at suspending my disbelief. But sometimes, it is so hard. This comic is really testing those limits. There better be someone getting their head smashed into something hard soon in this book or I am going to start screaming.

So. Captain America has arrived in Washington to check out what is going on with the Red Skull. He lands on the roof and is about to break into the building, when Hauptmann Deutschland shows up. Haupt thinks Cap is a phoney. Cap has no idea who Haupt is. 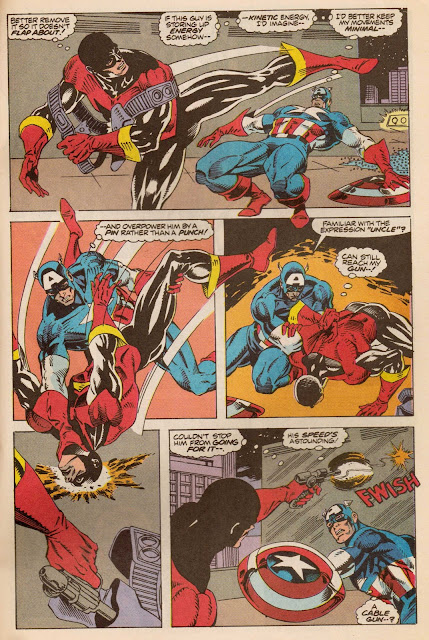 Actually, the action sequence here is pretty good. It's a four page battle that's got some dynamism and the deployment of ball bearings coated in oil. Kudos to artist Larry Alexander for the head smashing, and to writer Mark Gruenwald for having some balls (see what I did there....).

Haupt feels that the battle with Cap is giving the Red Skull more time to escape, so he takes matters into his own hands using a cable gun and good old gravity. 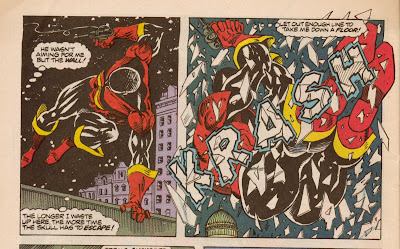 Cap follows Haupt into the Red Skull's office, and the comic ends with this: 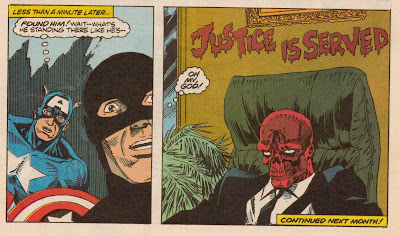 I guess when the Skull is shot in the forehead, his neck turns red.

And how do you write in block letters with blood?

Sorry, got a little nit-picky there.

You got to love the classic “bad guy slumped in a chair with a bullet hole in his head” ending, though.

Or maybe you don't – I don't want to come off as being preachy (especially after being nit-picky).

And that's probably why it is in the bargain bin.

And it's also a shame.

The book presents Captains of Countries (in Combat over the Capitol) who obviously have issues with Nazi war criminals, yet on rather different terms. The comic does, after all, begin with a war crimes trial. This could have been an opportunity to explore how American and German cultures have wrestled with the reality of Nazi atrocities. There could have been a cultural exchange of some sort in terms of forgiveness or understanding, but instead there were ball bearings coated in oil (which could, I guess, be symbolic of the slippery nature of the German people coming to terms with their past, but probably not).

There could have been something more to distinguish this comic.

This is not to say that there isn't a time and a place for just the plain old “superhero punching things” kind of entertainment, I'm an easy sucker for a “It's Clobberin' Time/Hulk Smash” blowing shit up real good kinda story now and again, but Captain America #393 doesn't even do that particularly well.

It just kind of “is” – and by having nothing to particularly distinguish itself, it pretty much fails to justify its existence.

A failed opportunity leads to a failed comic which leads to it languishing in the bargain bin.

Which points to one of the problems with comic books sometimes.

When readers of comics slavishly follow their favorite characters through thick and thin, comic book creators and publishers can lob a few turds into the marketplace every once in awhile without any real major repercussions. A franchise like Captain America or Batman or Spider-Man have a core audience that will get through Widening Gyres and Brand New Days and keep coming back for more.

And that's really not fair, is it? There should be some respect for the audience, shouldn't there? Don't editors have the power to call crap, crap?

Maybe there should be a labeling system for comics? “E” for Excellent, “G” for good, and “C” for crap only a completest should buy.

It would be good for the bargain bin industry, and probably the industry as a whole......