Random Pulls from the Bargain Bin
This Column Originally Ran on COMICS BULLETIN
In these economic times, finding inexpensive entertainment is difficult. Thank goodness for the local comic shop and a slew of comics nobody cares about anymore! Each week Daniel Elkin randomly grabs a comic from the bargain bin (for 50 cents) to see what kind of bang he can get for his two-bits. These are those tales.
December 14, 2011 – paid 50 cents for:
TESTAMENT #12
Published by: Vertigo Comics
Written by: Douglas Rushkoff
Art by: Peter Gross (layouts) and Gary Erskine (finishes) 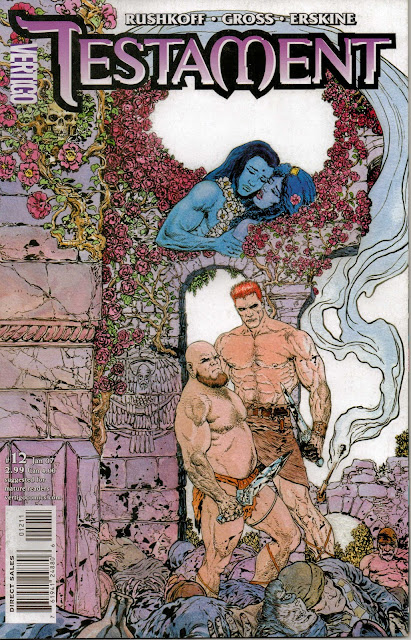 HUMANS MUST NEVER LEARN THAT THE TEXT KEEPS CHANGING...
In January of 2007, the American Astronomical Society announced that it had discovered a “triple quasar,” Japanese fishermen discovered a rare Frilled Shark, Scottish scientists successfully engineered hens to produce useful drugs in their eggs, Steve Jobs unveiled the iPhone, the Hitachi company broke the 1 terabyte barrier for hard disk capacity, and the Bulletin of Atomic Scientists moved the minute hand on the Doomsday clock to five minutes to midnight.

We buried Gerald Ford, saw the death of Robert Anton Wilson, and became enthralled in World of Warcraft: Burning Crusade.

January of 2007 was fecund, ripe with the rewriting of history.

Douglas Rushkoff is an American media-theorist, sort of a philosopher of our digital times, who thinks long and hard about how media impacts society. He is a very bright man who says some very interesting and important things, much of which is outside the purview of a column focused on bargain bin comics.

For my purposes, though, I need to bring up Rushkoff's 2003 book, Nothing Sacred: The Truth About Judaism. The basic thesis of this polemic is that "Judaism is a religion dedicated to media literacy." It is a religion, like almost all others, that is based on texts which have been brought into societal consciousness as being a set of rules, tenets, and historical events. But for Rushkoff, as he states in a 2005 interview with Comic Book Resources, “(I)t's actually the story of a revolution-- both of a bunch of people, and of human consciousness. It's a proposition for an open source reality and a set of guidelines for how to break the news to real people who love to believe in idols."

These sorts of pronouncements can get a person in some serious trouble, especially with an entrenched organization whose very livelihood rests on a particular set of “truths.”

Rushkoff goes on to say in the CBR interview, “I learned early on in life that if you have something that might be truly dangerous to say, say it in comics.”

And this brings us to our bargain bin Testament #12 and some serious mind-fuckery.

Testament #12 opens with a rather lush splash page: 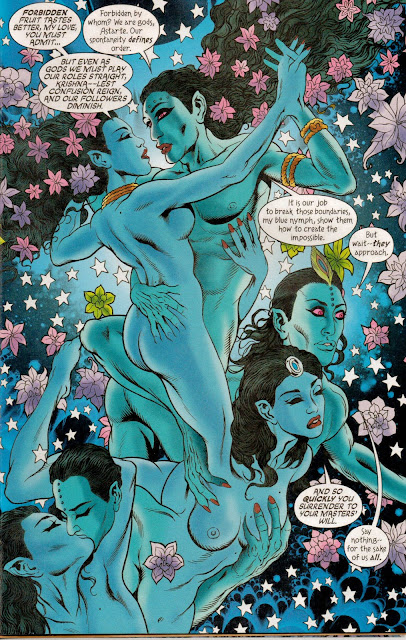 Here we have a melding dance, a sexual congress, between Astarte, a goddess associated with fertility and war, and Krishna, the avatar of Vishnu. From what they are saying on this page, their intercourse is a source of conflict. For Astarte, by mingling such as this, they are confusing a sacred story which will negatively impact the worshipers of this tale. For Krishna, though, this is what gods do, break boundaries and define order.

But apparently these are just Krishna's tired old pick-up lines (and he's one smooth operator), because he seems to contradict himself quickly by the end of the page.

Astarte and Krishna are playing for different teams and their “star-crossed” shenanigans are upsetting to the team leaders. Astarte seems to be playing for the team led by Moloch and Atum-Ra who are all about fucking up the dominant role of the “unnamed god” of the Judeo-Christian reality. On the other team, Krishna's team, the team captains are Elijah and “unnamed floaty beardy guy.”

Everybody is upset because Krishna and Astatre doing the beast with two backs dance is a “threat to the story” which is already “in such disarray.” 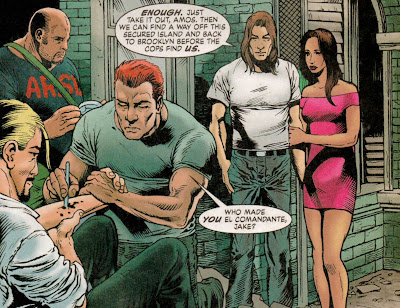 There's another story-line in Testament #12. This one revolves around some sort of near-future dystopia which is on the brink of “World Government, police state, total surveillance.” The powers that be are implanting chips in people in order to track them and turn them into happy little zombies. There's a Resistance Movement, though, of course (as there is wont to be in the face of fascism). Jake and his buddies are removing the chips, dropping off the “grid,” and fighting back.

It's pretty confusing stuff though, and Rushkoff throws out all kinds of near-future world jargon like “mana upgrade,” “NATS,” and “NARNS” without really helping me figure out what these things are. Then again, this is issue twelve in the series and I'm pretty sure this has all been explained before.

Anyway, there is a lot of stuff going on in this story-line. 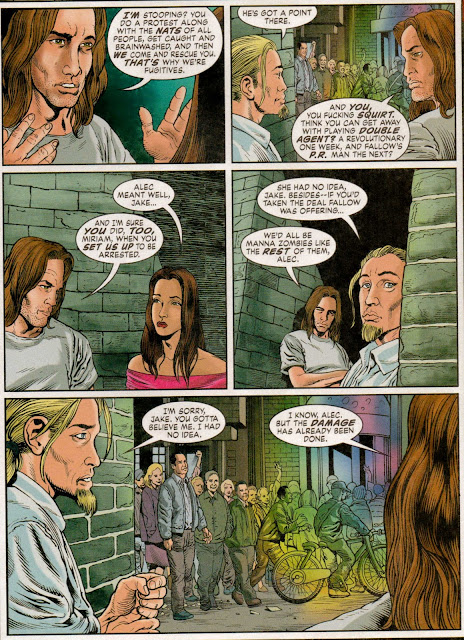 None of it seems good.

But I'm not sure how Jake and his buddies fit in with the whole sex of the gods thing earlier in the comic. 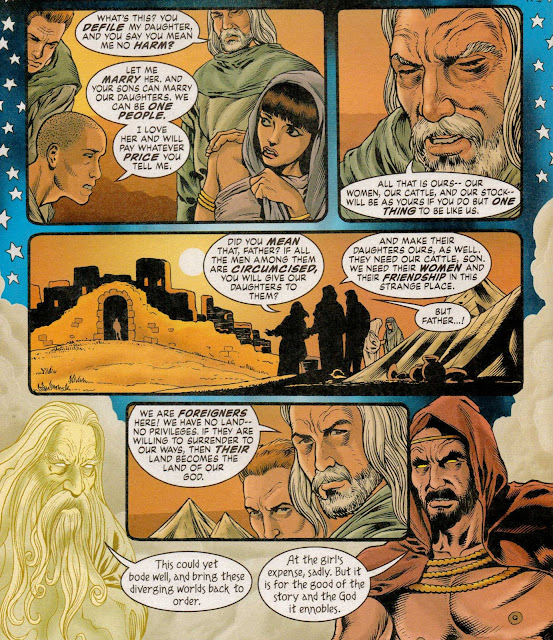 Now we've got a third story-line to complete the triad. This one seems more directly tied to the first Gods story in the book and it has to do with Biblical events being re-imagined/relived/retooled. Astarte, Moloch, Elijah, and “unnamed floaty beardy guy” are confused. Suddenly the events of the Bible are not playing out the way they were written, exactly.

From what I can gather, this story-line has to do with the whole Abraham, Issac, and Jacob thingy from the Bible, but I am rather lax on my Old-Testament scholarship (sorry, Mom), so I get a little confused here. But then again, I've been a little confused since I turned to page one in this book.

I am heartened, at least, that the deities from the first story-line seem to share my confusion.

The comic then jumps back to Jake and the gang trying to avoid getting captured by the authorities. They hop on a boat captained by a bald guy with a big gun.

Then all three story-lines converge on one page forming a triple layer Oreo cookie of mind-fuckery. 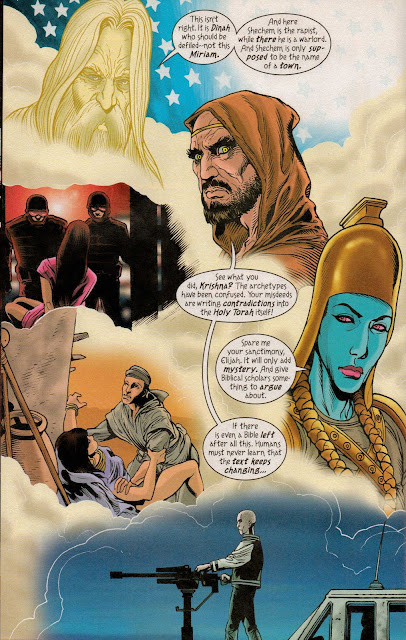 Krishna's diddling has changed the text of Torah which is having some sort of influence on the events of the near-future dystopia. “The archetypes have been confused,” which is a source of great consternation on the part of team Krishna (although Krishna himself seems rather nonchalant about the whole thing). Elijah's words at the bottom of the page, though, seem to be pointing directly to Rushkoff's overall theme for this series.

“Humans must never learn that the text keeps changing....”

And you can imagine why this must be. If a society has based its entire moral structure around an agreed upon set of truths that they have garnered from a specific text (media) subsequently finds out that the text is fluid and the truths are arbitrary, then structural implications of their entire society must therefore be called into question.

The result can only be chaos. At least initially.

It is also an opportunity for a new text based truth to emerge, a new media campaign to deliver the values of that society.

And this may not be a particularly good thing.

Astarte and Krishna seem to be deliberating this point as well. 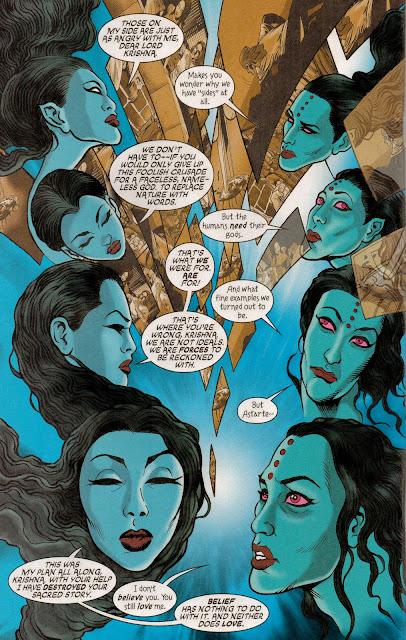 Astarte has been trying to destroy the media through which society has cobbled its understanding of reality. Is she offering a higher, more “true” understanding of reality? Or is she just destroying for the sake of destruction? I can't figure this out. She and her team obviously have an issue with the “faceless, nameless god” of the current reality-structure. Is their motivation to replace Judeo-Christian reality with a reality-structure based on their own will?

The comic jumps back to Jake and his fellows afloat on their boat, trying to figure out what's what with all the “what's that” going on. They seem to be unaffected by the Bible rewrite and God-pompous party going on. Their immediate concern is that they are floating on a boat enmeshed in the mist. Oh, and a Patrol Boat headed their way.

The bald captain of the boat prepares his big gun.

But before anything can come of that, we've got “an entire village of newly circumcised men” to visit. 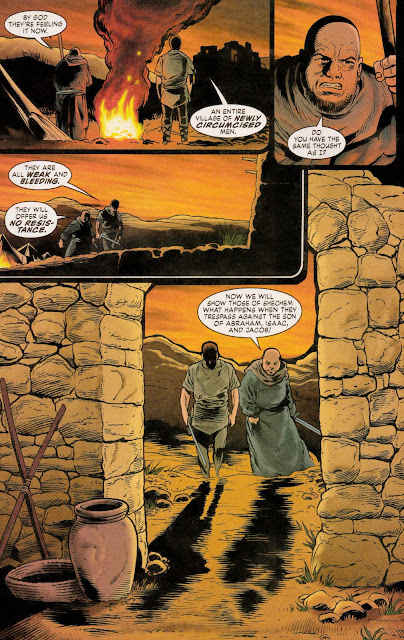 Then all the stories collide and combine in another layered Cookie.

The sons of Jacob slay the circumcised men (which is very rude). Jack stops the bald captain from shooting his big gun. And Team Astarte and Team Krishna agree that everything is totally out of control and “things must be put in their place.”

How to do this?

Wake Marduk from his slumber. 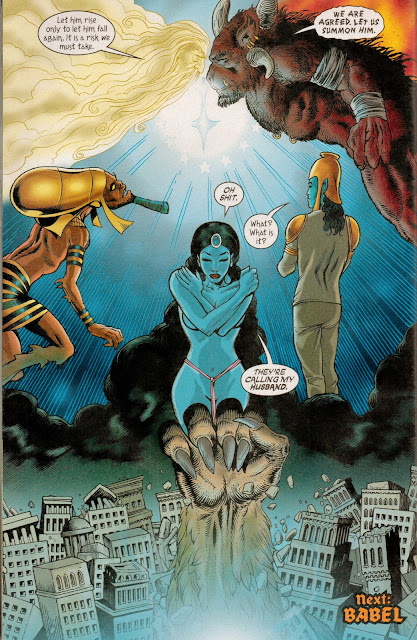 That can't be a good thing.

But it certainly is a dramatic way to end a comic book.

In the aforementioned CBR interview, Douglas Rushkoff says, “Fact is, the Bible can be used as a set-in-stone sacred and unchangeable viewpoint, or it can be used as the entrance to an utterly open source perspective on reality. As I see it, these stories give people the tools they need to begin to confront life and reality in a very open, evolutionary fashion. To me, the Bible makes a case for evolution-- not creationism. And it's important that I expose people to this side of things, before they completely dismiss this stuff as irrelevant or sanctimonious."

OK, I get this, Mr.Rushkoff. You are trying to force us to examine the “truths” that we take for granted and, through this process, hopefully come to understand that not only can we easily be manipulated through this wholesale buy-in, but that this a priori acceptance of these “truths” blinds us to other possibilities.

Texts that we as a society have agreed upon as being “sacred” are the most powerful media outlets going, as they carry with them an unmitigated gravitas. It is this “sacredness” of the texts themselves that so easily lend themselves to abuse in a very dehumanizing way.

Mr. Rushkoff, these are truly important statements – dangerous, revolutionary statements – and I applaud you for taking this on, especially within the confines of a popular culture medium such as comic books.

But why you have to make it so confusing, eh?

Using media to comment on the influence of media is always a slippery slope, especially when the medium you choose to make your commentary is one which is often seen as the purview of soft entertainment. How you are supposed to peddle big ideas in small panels?

Maybe this is why Testament #12 ended up in the bargain bin...

I know I am speaking out of turn here. This is, after all, issue number twelve of the series and I fell into this whole experience without any prior knowledge with which to guide me through. It behooves me to seek out the larger context before I make any sort of judgments.

Luckily for me, Vertigo has collected the entire twenty-two issue run of Testament into four trade paperbacks.

Luckily for me, Christmas is just around the corner.

Luckily for me, I've got all these loyal fans out there who are currently asking themselves, “What can I get Daniel for Christmas this year?”

I dig me some of them there big ideas. They blow up real good.