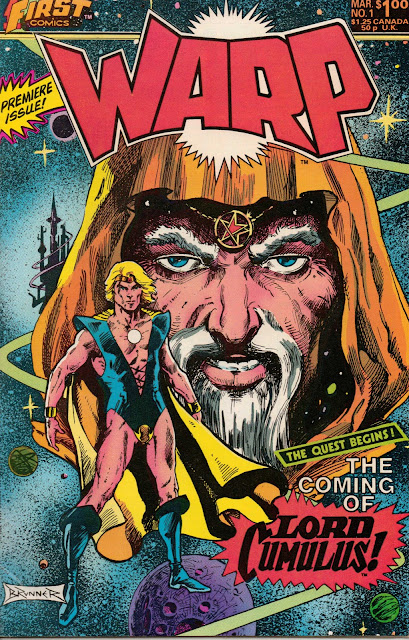 SOMETHING IS SERIOUSLY WRONG HERE.
Michael Jackson swears that “the kid is not my son,” while Kenny Rogers and Shena Easton assure us that “We’ve Got Tonight”. That’s right, it’s March of 1983. All the girls watching “The Thorn Birds” on TV want to be Meggie (Rachel Ward) because none of them knew that Richard Chamberlain was gay. Hanging out at the movie theater, do you go see “Max Dugan Returns” or sneak in to watch the beer-guzzling fun of “Spring Break”? Yes, there’s entertainment everywhere, including your local comic shop. In March 1983, First Comics publishes Warp #1, and suddenly provocatively placed medallions try to become a fashion statement.

Having gone into the history of First Comics before when I reviewed Badger #14, I will instead talk about the history of Warp, as it is far more interesting. According to Mike Gold, the Managing Editor of First Comics, “Warp got its start back in 1971 on the stage of the Organic Theater Company” in Chicago. This was a stage play. Written and performed by the Organic Theater Company. In 1971. Now it’s a comic.

Warp was originally conceived as a three-part production: Warp I: My Battlefield, My Body; Warp II: Unleashed, Unchained; and Warp III: To Die … Alive. Of the production, Gold says, “Strange lighting effects, sweaty actors producing mammoth fight scenes right there on stage … all the magic of the epic comic books was all there on stage, right before your eyes!” Warp kept being produced for around a year and after an amazing “Warpathon” where they performed all three episodes, the cast and crew left Chicago for the bright lights of Broadway.

What happened next? Gold informs us that “in spite of excellent reviews in such places as Newsweek, The Wall Street Journal and Playboy, and in spite of excellent attendance at the previews, the concept of Warp was just a bit too much for the more staid critics of the daily papers … Warp closed in three weeks.”

Back in Chicago, Warp rose from the dead in 1979, played a sold-out five month run, moved to a larger theater, and “racked up an impressive eight month stay.” Then, in 1980, “40 comics pros attending the Chicago Comicon saw Warp II: Unleased, Unchained.” This sparked some kind of vague bidding war or something for the rights to make Warp into a comic book. Gold writes that “for a variety of business-type reasons, we thought it might be better for us to do the comic book on our own.” Three years later, First Comics brings out Warp #1.

Just to reiterate. Warp was originally a stage play done by an experimental theater group in Chicago in 1971. Twelve years later it became a comic book. I’m only trying to prepare you for this. I am in no way liable for anything that may happen next. 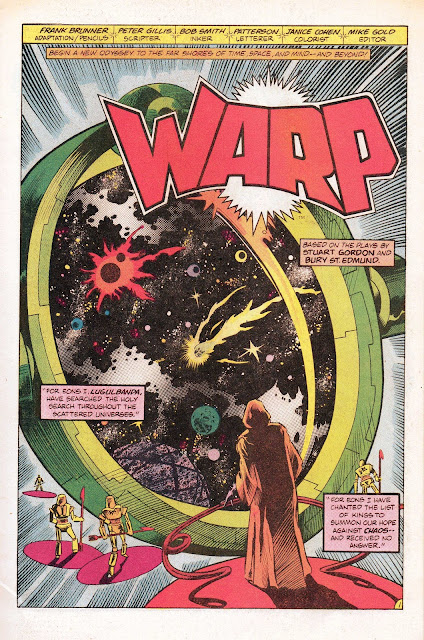 Warp opens with a pretty cool splash page of some hooded guy staring into some device that allows him to look at the universe. A text box on the left states, “For eons I, Lugulbanda, have searched the Holy Search throughout the scattered universes.”

Here we go. The guy’s name is Lugulbanda. He’s searching throughout universes – with an “s” -- plural. At least they didn’t take long to let us know what we are in for.

The comic then jumps to Central City Bank, specifically on over-worked bank teller David Carson. David’s got blonde hair and glasses, so we can guess that he is the one for whom Lugulbanda has been seeking. David not only has an exciting career as a bank teller, but he also has a hot girlfriend named Mary Louise. When Mary Louise is first introduced, though, we get this scene: 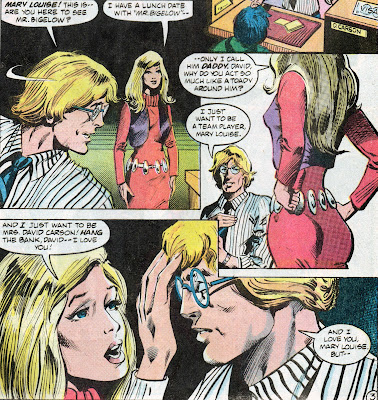 She calls him “Daddy?” When I first read this, I completely misunderstood what was happening. Turns out Mary Louise is not a gold-digging whore at all; she’s the daughter of the bank manager, Mr. Bigelow. My mistake. I guess it was that whole arms akimbo in a tight dress drawn from behind thing that threw me.

David then suffers a huge headache which he downplays in front of Mary Louise and her father. He doesn’t want to tell them that the reason he has headaches like this was because of the years he “spent in the INSANE ASYLUM.” I guess it never came up during the job interview or any of the dates he’s been on with Mary Louise.

Flashback to the INSANE ASYLUM and we see David having some sort of vision with smoke trails emanating from his forehead. In this vision he sees an afro-sporting red man with hipster tribal tattoos who says, “I have won, Lord Cumulus! I have won and I am FREE!” This is obviously foreshadowing, but can you have foreshadowing in a flashback? Isn’t that unnecessarily confusing? And how did they manage this during the stage production?

Flash-forward to the “present” and David starts hearing voices in his head telling him that Fen-Ra awaits him and that he must protect THE CRYSTAL! David runs out the door and is either hit by a truck or falls in a big hole or (as it turns out) sucked into “Another Time and Space” – but the artwork doesn’t quite make this clear until you look at the next page.

David pulls himself together and notices that not only is he in some very strange environment but he’s now wearing a black boots, a cape, and a black “Borat” thong thing with a gold medallion strategically placed over his manhood. 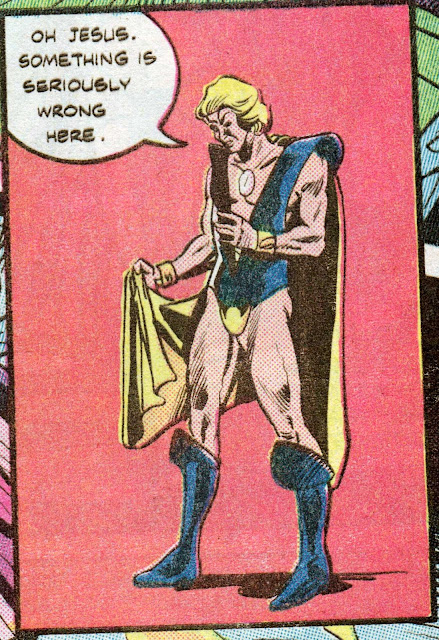 David finds himself in the home of Valaria, some kind of green mothwoman who is not a big fan of covering herself modestly. She explains to David that the evil Lugulbanda is out to get him. She has her monkey servent, Symax, give David some wine and he begins to relax and lie down with Valaria. Suddenly, a shiny gold man holding a trident appears and tells David not to trust Valaria. The shiny gold man is called a “Faceless One”. Probably because he has no face. I’m just guessing, though.

David points at the Faceless One, which subsequently explodes. Valaria tries to get David to relax, does some sort of witchy thing to make him drowsy, and then pulls a knife on him. All pretense of moth-lady loving now thrown to the wind, David turns and says, “Oh no you DON’T, you little bitch!” Valaria reacts:

The DEATHSWARM is, of course, BEES! I wonder how they pulled that off during the stage production… I could make all sorts of “Wicker Man” jokes at this point, but I shall take the high road.


The rest of this article is over at
POP CULTURE ZOO!