Convenient Truths -- IF A TREE FALLS: A STORY OF THE EARTH LIBERATION FRONT

Sometimes the most universal truths can be found in the smallest slices of life. That’s what makes independent documentaries so powerful, engaging, and entertaining. Not only do they show you little worlds to which you’ve never had access, but they oftentimes also tell the larger story of what it means to be human. Armed with this intellectual conceit, a bag of Funyuns, and a couple of Miller beers, Daniel Elkin curls up in front of the TV and delves deep into the bowels of Netflix Streaming Documentaries to find out a little bit more about all of us.
THIS COLUMN ORIGINALLY RAN ON COMICS BULLETIN
Today I found 2011's If a Tree Falls: A Story of the Earth Liberation Front, produced and directed by Marshall Curry and Sam Cullman. 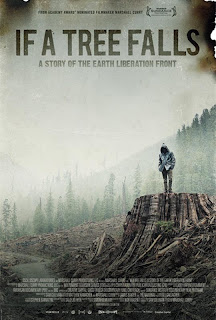 If a Tree Falls: A Story of the Earth Liberation Front is ostensibly about the Earth Liberation Front (ELF), a “leaderless international coalition of radical environmental groups” formed in the 1990's as a response to the the Environmental Movement's inability to gain any traction stopping the wholesale destruction of the natural world by corporations in their quest for greater profits. Members of the ELF began to fight against what they perceived as the rape of the environment with their own form of destruction, setting fire to timber companies, SUV dealerships, wild horse slaughterhouses, and a $12 million ski lodge in Vail, Colorado. Because of these escalating acts of arson and property damage, in March of 2001 the F.B.I. designated the ELF as the nation's number one domestic terrorist threat.

The film approaches this story through a number of angles. First and foremost is the story of Daniel McGowen. In December 2005, McGowen was arrested at his office, the same office that director Marshall Curry's wife worked in. This set the wheels of the film in motion, and Curry's prior relationship with McGowen gave him unprecedented access to him and his story while he awaited the verdict of his trial for eco-terrorism.

The film does an excellent job of tracing McGowen's development from the mild-mannered son of a New York policeman to a radical environmental activist, while at the same time documenting the rise of the ELF, but this is not the fundamental heart of the documentary.

In one of the interviews in the film, McGowen asks, “When you're screaming at the top of your lungs and no one hears you, what are you supposed to do?”

The Environmental Movement, especially in Eugene, Oregon, was finding its voice more and more marginalized by the Government, Corporations, and the larger society. The Authority's response to environmental protests were becoming more and more “jackbooted” as time went on. In one of its more unsettling moments, the documentary shows officers in the Eugene Police Department responding to protestors occupying trees that were going to be cut down to make room for a parking lot by dousing them with pepper spray and tear gas.

As one of the individuals interviewed in If a Tree Falls: A Story of the Earth Liberation Front says, “As police ramped up their presence, people's views got hardened.” 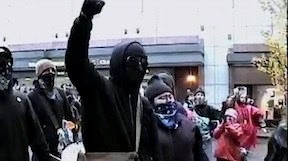 One of the outcomes of this hardening of people's views was the creation of the ELF and the organization's agenda to take the fight back to those they felt were doing the most damage.

The film gives an even-handed look at the ELF's motivations and actions. It also takes an unbiased view of what actually constitutes “terrorism” and whether the ELF's crimes fall into that category.
As Director Marshall Curry has said about the film, “There were no easy heroes or villains.” Curry consciously refrains from taking a stand on any of the issues raised in the film in order to give “an unsettling ride that shifts your sympathies and leaves you with a more nuanced view of the world.”

That's what makes this film so great. If a Tree Falls: A Story of the Earth Liberation Front lays bare the complexity of the issues it examines. It provides no easy answers because there are none. It is not a documentary offering solutions, it is a documentary that raises questions.

And these questions are as paramount today as they were then. To reiterate McGowen's query, ““When you're screaming at the top of your lungs and no one hears you, what are you supposed to do?” When your voice has been silenced by those in power, how can you be heard? When the Authorities start to use force to disrupt your discontent, what is the moral and ethical reaction?

The ELF believed that consumerism is destroying the world and their reaction was to try to destroy some of the engines of consumerism.

There is a sense today that the attitude of self-preservation and the greed of a small number of individuals in this country are directly damaging the lives of the vast majority. Some of the vast majority in this country have begun to try to make their voices heard through protest. In many situations, the Authorities have begun to respond to these protests with force. It is the same cycle as outlined in If a Tree Falls: A Story of the Earth Liberation Front. Members of the Occupy protest movement have to be asking themselves the same questions that the members of the ELF asked.

What are they supposed to do?