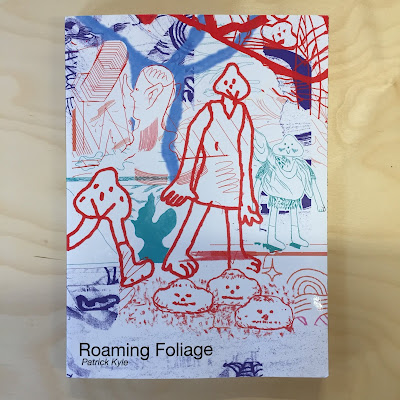 Profound and silly, abstract yet story-driven, Roaming Foliage encompasses all of the nuances of the wildly talented Canadian comics artist Patrick Kyle. His newest book is a marriage of the different types of abstract, fine art, and narrative-led comics work he’s done over the last several years. Following in the footsteps of 2016’s Don’t Come In Here, this book also delves into untamable and ever-shifting landscapes and individual change. While it certainly maintains a lot of the experimentation that Kyle is so well known for, this book is a return to a more recognizable narrative form. The story isn’t linear, nor is it particularly easy to follow. Nonetheless, this is Kyle at his finest, using abstract imagery alongside goofball character antics to tell a larger story about friendship and the importance of community.

Roaming Foliage follows a handful of characters as they traverse a wild and magical garden, each trying to find something they’re missing: acceptance, the ability to better oneself, a new suit, a battery-like fungus… the narratives shift, cross paths, and split up, making it feel like a cohesive world. While set in the garden, the location is also a functional character in relation to its seeming autonomy. As its “maze-like and chaotic” nature is affected directly by the emotional state of Rotodraw, a humanoid robot who has lived for hundreds of years, its shifting and changing affect the paths of other characters, who cannot control it. Kyle’s penchant for crafting physical spaces shines here. The world itself is as important to the story as any other aspect and the experimental layout of the book is right at home because of it. 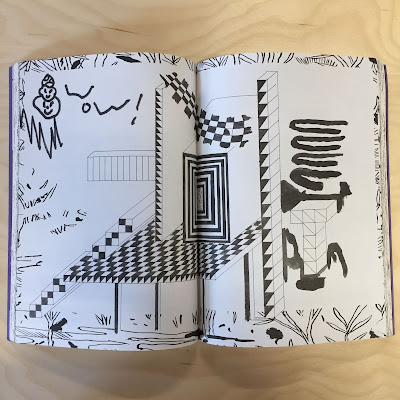 Within this world, there are two main groups making the journey. The first group consists of two boys in search of a fungus that powers Rotodraw. They help one another push their way through the garden as it becomes increasingly unstable, facing unexpected adversaries like a gigantic elf and a conscious fungus. It’s classic Patrick Kyle, a romp seemingly unbound by time and space; the kind of rambling, fun adventure he excels at in his short stories, expertly woven into this larger narrative.

The other main arc of the book, in which a girl and a small head without a body traverse the garden together, is profoundly beautiful and rife with the pro-community and friendship themes that Kyle sneaks into much of his work. The two work together for most of the book as one body is stacked two heads high and the narration and dialogue don’t hold back from exploring their newfound partnership. “Look at us, unification of two friends into one perfect person,” the girl says. “Power and influence through team-work.” Their conversation is almost heavy-handed at times, but it’s beautiful and soft in a year that really needs more friendliness in the comics space. 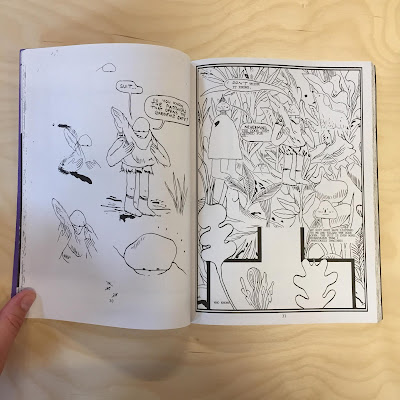 Even more poignantly is when the bodiless head is given limbs, and, thus, independence from being carried everywhere. Without batting an eye, the girl states, “I’m so proud of you! You were so brave!” The head’s independence only strengthens their friendship bond as they move forward on their journey. In a book somewhat cluttered with multiple storylines and unrelenting visuals, one can almost gloss over the sweetness the characters exhibit toward one another. There is almost no malice or cruel action in the entire book, and the characters openly praise and encourage characteristics they find admirable in one another. Community is praised and characters who help one another are rewarded.

Kyle’s writing style is enviable here in that he effortlessly shows off his ability to create dense blocks of narration and over-simplified dialogue which is captivating, serious, and funny all at the same time while still allowing the story to progress. Exposition and dialogue are interwoven with narrative seamlessly in a way that in a weaker writer’s hands might feel clunky and forced. The writing often tells what’s happening instead of letting the visuals simply show the reader, but in the end, words service the art, which is able to constantly shift and change to craft a unique tone. 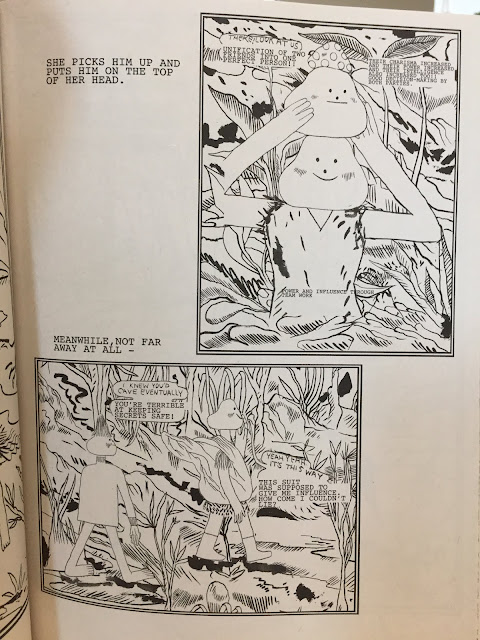 If it suffers from anything, Roaming Foliage can be hard to follow as Kyle seamlessly shifts point of view around in a physically inconsistent world. This doesn’t necessarily drag the story, it just requires more of the reader’s attention. The density of more cluttered pages requires the book to be read carefully and one cannot simply skim the dialogue boxes and understand the plot of the book. There is more to it than an illustrated conversation and the book challenges you to find out what it’s all about.

In fact, where Roaming Foliage really excels is in its experimental use of the comics medium itself. It’s the kind of comic that can only really exist as a comic, yet, even with this, it eschews classical page layouts and paneling schemes allowing each page to become a piece of art in its own right. Kyle is as much a cartoonist as he is a fine artist and illustrator and it’s here he uses those skills to masterfully construct each page. Panels are only used when necessary, full bleed backgrounds run elements off the edges to emphasize the wild and endless state of the environment, and often a page is used to set a tone as much as it is used to advance the story. As an example, Kyle includes a page purely focused on a handful of items that the characters do not have. The page doesn’t need to be there as it doesn’t change the relationships between the characters and their space, but it sets an undeniably unique tone. 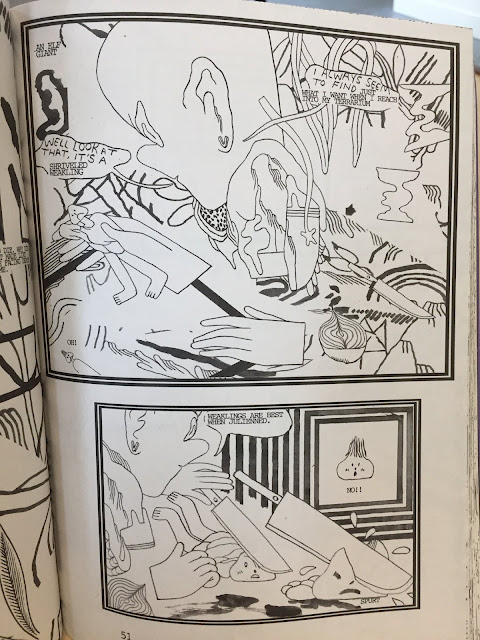 Further experimentation can be found in almost every page element. Sometimes hand-drawn, but more often set in type, the lettering is integral to the collage-like tone of the comic. Words litter the page, handwritten dialogue overlaps with typed dialogue, some words are even hidden within blocks of ink, only visible when the light catches the page just right. It’s ambitiously hectic and gives the book an improvisational feeling that lends to the ever-changing nature of the magical garden setting.

The heavily-experimental page layouts and intermittently drawn-out pacing require more from the reader than a casual afternoon read… and yet it somehow all works. Despite being visually cluttered, the characters still move through the pages in a way that unconsciously guides the eye and is marvelous to look at. It’s a delightful adventure comic rife with detail that plays with readers expectations in a way that most other artists aren’t quite doing. 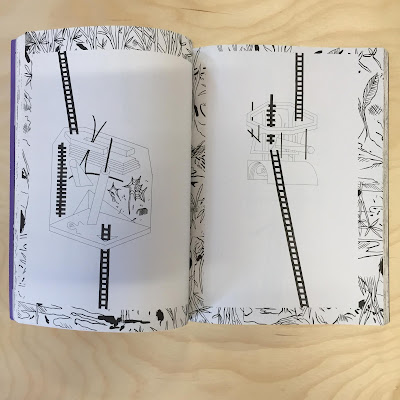 Through it all, friends work together and grow closer, a community is strengthened, the world proves itself to be a cyclical more than linear, and, when it’s all over, the reader finds themselves back where they started, and eager to read through a second time. 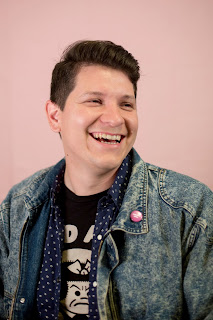 John James Dudek is a comics artist and a graduate of the IPRC Comics & Publishing Program. He cares a lot about worldbuilding and how people develop stories. If you like these things too, please talk to him about it! He can be found around the internet @funwithjohnjames. He makes art in Portland, Oregon with the Soft Skills Comics Collective. He is friendly.