The Laughter Is On Her Side: Rob Clough reviews CHLORINE GARDENS by Keiler Roberts 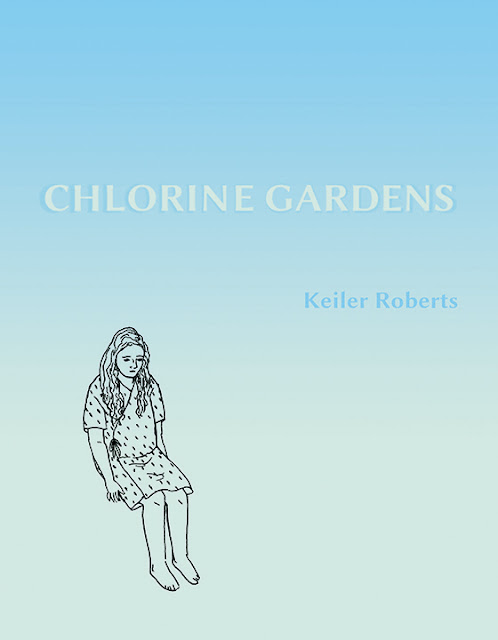 On the face of things, little has changed in Keiler Roberts' work from her earliest days doing her Powdered Milk minicomics. Using an immediate, expressive, naturalistic style, Roberts emphasizes small moments in her life and tells them in brief, anecdotal bites. There's not much in the way of an overarching, personal narrative. She tells stories about her perfectly ordinary and reasonably comfortable life in the suburbs as part of a family of cartoonists, her young daughter, and her friends. Roberts also dives back into her memories to pluck out the occasional narrative. Throughout it all, Roberts maintains a comedic tone that is bone-dry.

Of course, because Roberts' work is predicated upon small, subtle changes over time introduced with little fanfare, it requires a careful look at her comics in order to see precisely how she's evolved as an artist since her early days. The key to understanding her work is that though she talks about subjects that are sometimes quotidian and sometimes deeply personal and serious, Roberts always thinks like a performer. However deadpan she might be on a page, she tends to think of whether or not an audience might find this interesting or funny. I recently interviewed her as part of a panel at SPX on writing about having bipolar disorder, and when she really went off on a subject, she was hilarious. Her success as a humorist is a reflection of her overall wit and ability to think on her feet, combined with a sense later of how to capture moments like that on the page. She's not flashy as a performer or cartoonist and reminds me a great deal of Gabrielle Bell in that regard, only Roberts' perspective and subject matter is completely different. That said, they both seek to entertain their audiences.

That's why Roberts was initially reluctant to talk about having bipolar: she thought it might bore her audience. Powdered Milk was initially built on the wacky things that her young daughter Xia said and did, giving her an incredible amount of cute-kid material. However, Keiler's depression couldn't help but bleed through in her early work as she frequently drew herself crying without any context. Ultimately, she decided it was an important thing to share and naturally found ways to draw humor from depressive episodes later, as she was able to think about them from a different perspective. At that SPX panel, she joked that she made sure to develop a new disease or condition for each new book. Miseryland introduced bipolar, while Sunburning explored that further and introduced a host of neurological problems. Her new book, Chlorine Gardens (Koyama Press) introduced Multiple Sclerosis to the mix, and she joked that her next book will be about ringworm. 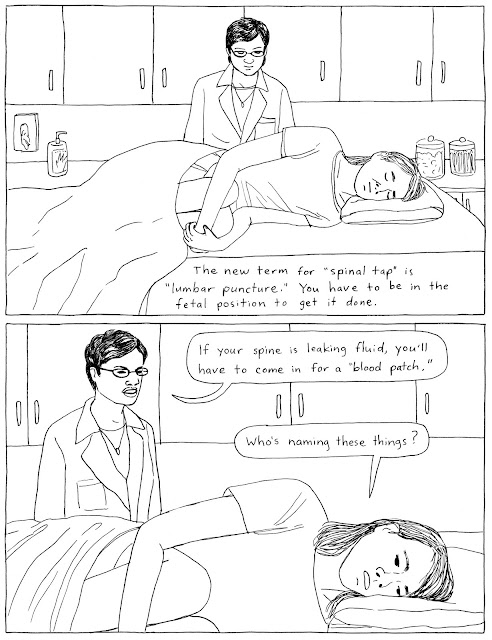 Chlorine Gardens seems like more of the same at first. She does indeed explore what it means to possibly have MS. There are strips about her husband Scott, her daughter Xia, and her parents. However, this book represents a big shift in her work in that for the first time, Roberts makes herself the star of her own comic. Certainly, it's always been from her point of view and she was honest about her feelings and experiences, but she was often the straight woman in her own gag strip. The biggest difference is that Xia, who was the star of Miseryland and still a major character in Sunburning, is relegated to being more of a funny side character here. That's due in part to Roberts talking about stepping back from focusing on her as a gag machine because she's older and aware of what her mom is doing. Roberts replaces that void by talking much more and more directly about herself and positioning herself as the comedic star of the book. Roberts also uses a slightly more formal structure in creating longer, themed comedic stories instead of the loose flow of her other books.

For example, the book opens with nine pages devoted to her recollection of the birth of Xia. While there are wacky characters like her doctor, Roberts' own observations (and they are often withering) are far more important with her narrative captions than what the other characters do. Indeed, whereas in past books she tended to eschew first-person narrative captions, this book is dominated by that storytelling technique. There is still a great deal of fluidity in Roberts' storytelling in terms of how she lands on one idea or memory and then jumps to another, but the structure of the mini-chapter makes those connections more concrete. The first chapter ends with Roberts talking about her poor short-term memory and how it is a constant source of anxiety. She manages to play it for laughs, as per usual, but there's something about the anxiety she feels during unstructured time that feels familiar and disturbing. That sense where one knows something is wrong but can't quite remember what is wrong is agonizing, like an itch you can't quite reach or a sneeze that's trapped. 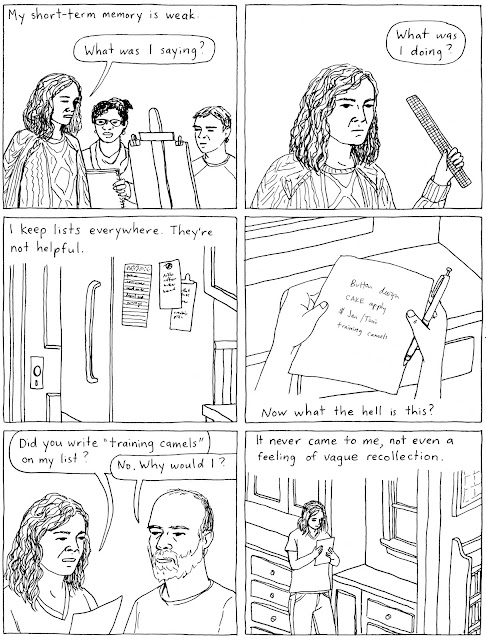 A trademark of Roberts that is continued in this book is her utter deconstruction of anything involving sentimentality. Roberts loves animals, yet she loves depicting her (admittedly very strange) dog Crooky as frequently being a terrible pet. This idea of Roberts as an iconoclast is played up the most in the section where she explores that tendency of hers to want to be alone almost as much as she wants to make connections with others, expressed in the crankiest ways possible. It's not just that she wants to be alone, but that sometimes her entire aesthetic viewpoint is completely divorced from others. In the bit that kicks off this chapter, she laughs at a sign that says "This Thanksgiving, you don't want to be my pants" because she imagines it to be about someone shitting their pants. It's part of a magnificent page in a crowded mini-van where she goes on and on about this idea, laughing until she was crying while everyone around sat in stony silence. It's one of the few times Roberts has used a deliberately awkward but comedic set-up for laughs, as opposed to being relentlessly dry and deadpan. Of course, in the follow-up to this page, she sees the sign again and laughs till she cries once again, but notes that the physical act of crying actually makes her feel sad afterward. It's a brutally honest observation that acts as kind of a landmine for both herself and the reader.

Other pages in the chapter feature her asking her husband Scott when he was planning to leave the room, being angry at a friend for moving away, Scott catching her being on-brand when she says "Our marriage has been an eternity" and promptly putting it on Facebook, and that misanthropy being reflected back at her when Xia simply grabs a blanket that Roberts was using and walking away with it. Roberts obviously plays it up to get laughs, but it was interesting to see her feature this aspect of her persona in such a concentrated dose. The chapter where she and her family travel to Ireland for a gallery show, only for Roberts to reveal how much she hates traveling, further plays this cranky aspect of her personality for laughs. At the same time, Roberts digs a little deeper beyond the punchlines to reveal genuine anxiety about being overwhelmed in new environments. Whereas before Roberts made a point of examining mental illness front and center and in short bursts, in Chlorine Gardens she's made it a secondary aspect of nearly every chapter. 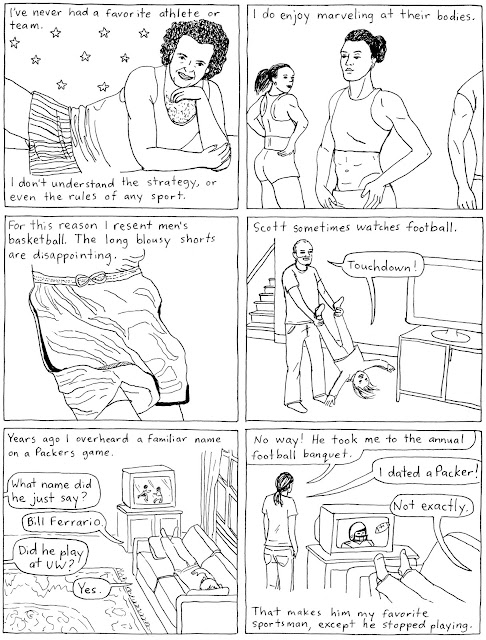 Though Roberts' drawing style is restrained and naturalistic, that's not to say that she doesn't choose specific images to draw a reaction. In a story about "favorite things", she talks about her disinterest in sports: "I've never had a favorite athlete or team. I don't understand the strategy, or even the rules of any sport." The image she used for this panel was that of fitness guru Richard Simmons, who not only has nothing to do with any sport but is the polar opposite of the macho sports mindset. Making that her choice as an avatar for all of sports was a hilarious, deadpan choice that both mocked her own ignorance and emphasized her total indifference.

Roberts dips into a wide variety of subjects elsewhere in the book: the latest shenanigans from Xia (who is now exhibiting some pre-teen tendencies); funny things her parents and siblings do; grappling with the idea of being special and her creative process; the death of her grandfather; and an extended section on belief and prayer that of course winds up with her ass submerged in a bedpan. The indignities of life are something that greatly amuses Roberts because it's an easy thing to laugh at. That's opposed to, say, having an incurable neurological condition like MS. The chapter where she's getting all sorts of tests has some of her funniest work, starting with a panel where she got "out-deadpanned" by a friend, only it didn't count because Roberts was on valium after an MRI. Roberts integrated all of her usual elements into this chapter: her husband, her dog not comforting her ("you're a dis-service dog"), coping with a new set of symptoms and side-effects, and an experience with a friend at another hospital. 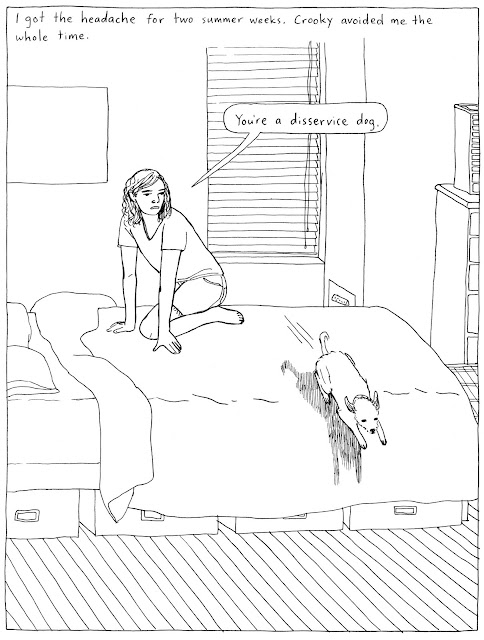 The final three pages recapitulate the whole book. There's a page about Crooky again being an annoying dog before Roberts realizes that her pet might be going deaf, and she says, "Oh Crooky. Are you going to be my next tragedy?" The next page was an MRI report that finally confirmed her MS diagnosis. That's a jet-black way of Roberts saying "womp womp", but she chose not to leave readers on that note. Instead, the last page is a sort of non sequitur of an exchange between Roberts and her mother, about a bunch of blueberries exploding in a freezer. It's a statement that reveals that no matter what health problem or life challenge she encounters, it won't alter Roberts' dedication to telling her story and entertaining her audience. It reminds me of the aphorism from Soren Kierkegaard, where he goes before the gods and is granted one wish. They offer him youth, beauty, power, sex, etc, but he responds that he only wants the laughter on his side. They laugh in response, which is how he knows he got his wish. In response to the question of what is your favorite thing, for Roberts, I think it might be the sublime ability to tell her story honestly and still have it be funny. Her wish has certainly been granted, many times over.