“Locked in the Trunk of a Car": Matt Vadnais on the Subversion of American Mythology in Matt Kindt and Tyler Jenkins’s GRASS KINGS 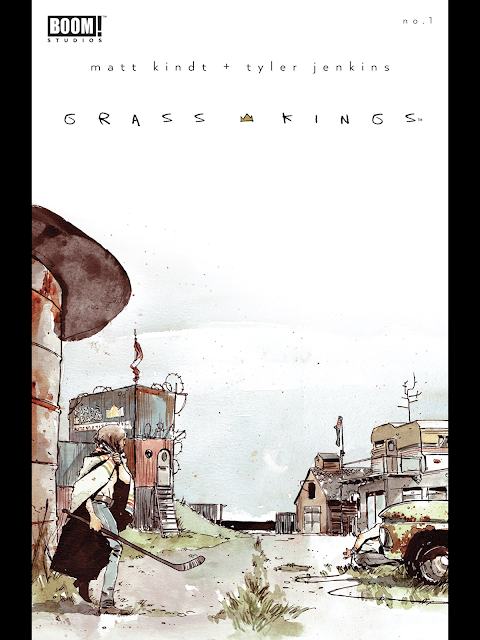 In the months immediately following Donald Trump’s election, countless pundits who had been surprised by his victory ran pieces contemplating the motives and realities of a swath of Americans who, because they had been ignored for decades, lashed out at the ballot box. Major news outlets were suddenly obsessed with the white working class, running think pieces and, in many cases, suggesting that progressive platforms had become too interested in “identity politics” to speak to angry, often uneducated, white voters in rural America. Leaving aside the absurd supposition that the “white working class” is somehow a category of identity not bound by identity politics, the ironic thing about all of these articles is that the last half-century of American popular culture has not only been dominated by portrayals of such Americans, the default operating principle of these works has been to define their white, working-class (usually male) protagonists in such a way that they are stand-ins for the universal human condition. From the music of Bruce Springsteen and the Tragically Hip to the television populism of Friday Night Lights to the blue-collar literature of Raymond Carver and Richard Ford, much of American Realism is about the plight of honest white folks trying to hang onto their dignity and agency in the contexts of a changing world and an indifferent government. The preoccupation with the identity of the plain-spoken white man who simply wants the freedom to drink a beer in the kingdom of his own castle is strong enough that its shadow colors depictions of characters ranging from Han Solo in Star Wars to the historical Robert the Bruce in Braveheart. Published during the first 15 months of the Trump administration, Matt Kindt and Tyler Jenkins’s Grass Kings – a fifteen-issue chronicle of the final days of a survivalist compound – might be understood as an attempt to humanize the ostensibly invisible population that has, in actuality, already been serving as a “universal” stand-in for humanity. 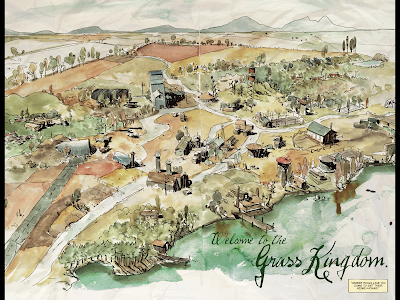 And yet, despite the flurry of pieces about how American media has supposedly ignored the anger and resentment of characters like the Godkins brothers at the center of this book, Grass Kings is a tough sell to folks who believe that these stories are not only already ubiquitous but that such ubiquity has served to exclude the anger and resentment of actually marginalized populations. However, Grass Kings does succeed. Jenkins’s terrific watercolors convert internal emotion into viscera. Kindt’s acute awareness of the literary and musical traditions he is drawing on extends the scope of the book beyond the Grass Kingdom. Kindt and Jenkins ask compelling questions about the relationship between self-agency and connections to other people, ultimately suggesting that freedom is meaningless without empathy. 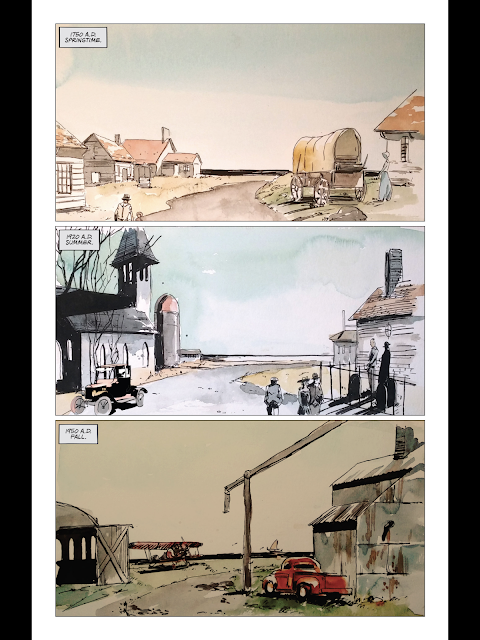 In the first issue of Grass Kings, Lo, a spy from the neighboring town of Cargill, is given a rough ride in the back of a police car. As he is warned never to come back to the Grass Kingdom, Lo serves as a surrogate for the reader; the warning he is given by Bruce – a man whose name and scruffy sheriff persona invokes protagonists from across Springsteen’s discography – provides the reader a tour of the dilapidated buildings, stacks of shipping containers, and houseboats suspended from trees that constitute The Grass Kingdom, an off-the-grid community that owes its name to the Tragically Hip song “Wheat Kings.” The rusted and repurposed structures, like the people Lo sees Bruce talk to, including a retired crime writer, Bruce’s younger brother, and a sniper keeping watch on the Kingdom’s borders, are all rendered in Tyler Jenkins’s mournful watercolors, blotted and stained. However, Jenkins’s work is best highlighted by the end of the issue when Bruce’s brother Robert – busy drinking himself to death mourning the accidental drowning of his daughter – is interrupted by the arrival of a woman swimming her way to refuge. In these panels, the man’s shame and grief infuse the sky around him. When he wades into the lake that has taken so much from him, he is literally immersed in a wash of colors that readers have been led to understand as externalized reflections of his emotional state. 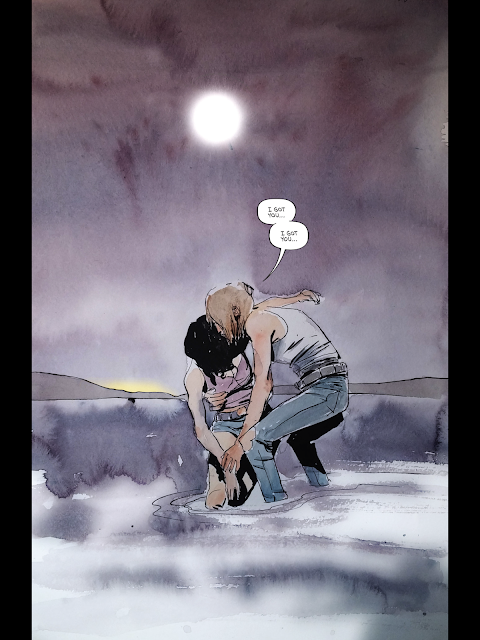 Part of what makes Grass Kings work is that for a book about a pseudo-Utopia threatened by “the Feds” and other wolves at the gate, the biggest threats to these characters’ sense of self is internal: Jenkins paints this world so that everything in the Kingdom barely holds onto the distinctions that define it. Because this world is only seen through the murk of memory, regret, and loss experienced by its residents, the infamous anger and resentment that launched a thousand think pieces following the election infuses the Grass Kingdom itself. Jenkins’s art is the primary way that Grass Kings rises above the contradictions implied by its existence and attempts to chronicle the struggles of an oft-chronicled population; Grass Kings becomes a compelling story because it never attempts to justify the angst of its protagonists, choosing instead so ask readers to care about characters trying to survive a hostile world created, at least in part, by their own emotions.

While Jenkins implies how fully the world of Grass Kings is embodied by the characters’ internal states, Kindt demonstrates how fully the world has been shaped by stories about similar worlds and people. The fifteen issues of Grass Kings weave several familiar stories together, each of which is referenced explicitly. The back covers of every issue feature lyrics from a song about rural violence. Moreover, a story of three brothers squabbling while an inherited Kingdom threatens to crumble invokes Shakespeare’s King Lear; this King Lear is set in a North American town featuring people “spitting off a bridge just to see how far down it really is” which invokes yet another Tragically Hip song, this time “Cordelia.” Likewise, Kindt’s choice to name the two oldest brothers Robert and Bruce draws attention to the Braveheart story and the subsequent white, masculine everyman. Characters who eventually escape the Kingdom by starting a band are shown listening to the Springsteen album Nebraska; the song they are listening to is about a conflict between brothers, one of whom is a law officer, regarding a woman who shares a name with the character who emerged from the lake in the first issue. Another character conducts an illicit affair of the mind by hiding letters in copies of books by Nabokov. Finally, a character who has moved to the Kingdom to write about it is called Hemingway. Kindt’s references and meta-textual elements suggest that the Grass Kingdom is under siege in part because of the self-fulfilling prophecy created by the tendency of white, male authors to imagine these sorts of characters and their simple, plainspoken life, as constantly under siege. Because Grass Kings is so aware of the canon of blue-collar freedom literature, Kindt and Jenkins are somehow able to tell a story about these freedom-loving brothers without reifying a falsely romanticized notion of unrestrained white masculinity as the epitome of freedom. Kindt and Jenkins avoid treating the Godkins brothers as stand-ins for humanity in part by populating the rest of the Kingdom with compelling characters including an undocumented immigrant, a black teenager, and a number of women who take on traditionally masculine roles central to solving the mystery at the heart of the Grass Kings. Though they traffic in a number of familiar tropes, Jenkins and Kindt draw attention to these tropes in order to subvert them. Maria appears in the lake in a way that, according to the rules of the genre, suggests that she will serve a purpose largely ancillary to the desires and needs of the man who finds her; however, Kindt and Jenkins not only give her agency to impulsively do things that drive the plot, Robert recognizes and respects her needs for space and freedom to be more important than anything he might need from her. Likewise, an issue ends in such a way that seems to conform to a tendency to kill the book’s most prominent black character to create drama for surviving white characters; however, the brilliantly named Pinball not only survives the attack, he goes on to play a central role in the defense of the Grass Kingdom while defining the terms of his relationships with those around him. 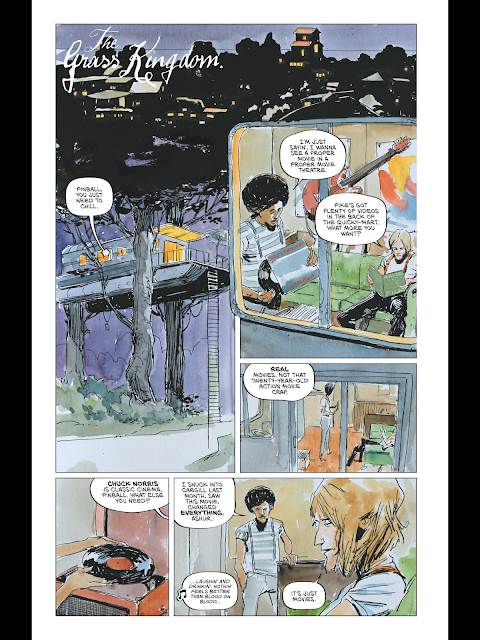 Ultimately, Grass Kings is compelling art because it does not take it for granted that readers will care about isolationists fending off and/or killing those who would threaten it. Instead, it uses conflict with the outside world to house stories of personal growth wherein characters realize that the Kingdom of their own making has less to do with land than it does with truly understanding the people who choose to live there. While it is hard to talk about this book without talking about simple people whose agency and freedom are threatened, the book’s real strength is the way that it shows characters in the process of recovering from having been told, by stories that have seeped into their worlds, that their stories, agency, and freedom are the only things that matter.