Dark Rooms: Matt Vadnais on Art and Other People’s Stories in Seekan Hui’s A PROJECTION 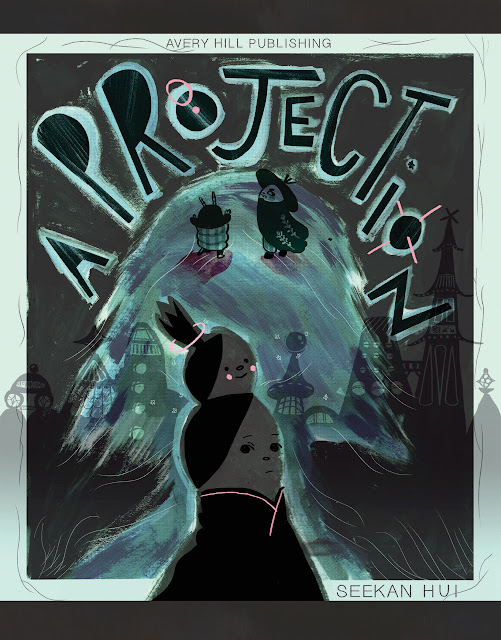 On its surface, Seekan Hui’s delightful and disorienting A Projection is a story about Cecilia, a character whom Hui carefully and somewhat inexplicably depicts with a second head literally projecting from her primary one. The title suggests that the reader ought to be thinking about identity as a kind of prosthesis, one that is both projected by one’s actions and presence in the world and also functions as a projection created by one’s interlocutors that prevents one from being seen as one truly is. Hui reinforces the title’s emphasis on Cecilia’s identity by crafting a relatively straightforward plot in which Cecilia takes the sort of shitty job one takes between college and one’s career and by making it clear that no one bothers to actually get to know her or acknowledge her complex, two-headed personhood. However, Hui’s use of Cecilia as a protagonist is a deft bit of sleight of hand that projects the linear story of Cecilia’s very bad summer upon a much differently shaped narrative involving the disruption of her boss’s cyclical grief involving the death of a child. Hui uses the relative familiarity of a late-stage coming of age story to get at a story that would crumble under the weight of linearity and, in doing so, creates a visual argument that demonstrates ways humans cannot help but use art to mitigate and control the otherwise overwhelming and incomprehensible intersection of the world and their own emotions.

The comic begins on Cecilia’s first day as she meets her new boss, the mysterious Baba who has taken out an ad looking for a live-in “FAMILY PHOTOGRAPHER” – a position that has clearly been filled many, many times with varying degrees of success – to provide daily documentation and, when needed, supervision of her children. Immediately, Baba shows a lack of regard for Cecilia as a person. She changes Cecilia’s name to two nicknames that she uses throughout the book without permission, introduces the house’s darkroom as the place in which Cecilia “will live,” and asserts that Cecilia’s job is not so much to take pictures influenced by her artistic sensibilities but to take photos similar enough in style that they can join the framed portraits on the wall of her family shrine, photos taken by the implied but unnamed litany of those who have held the job previously. Indeed, Baba extracts as much value from Cecilia as she can before, inevitably, Cecilia quits and Baba is, once again, in need of a family photographer. The house and job function as containers for a hermetically sealed chapter of Cecilia’s life that obeys Aristotle’s unities of storytelling, focusing on a single character, taking place in a single location, and happening during a single season. Consciously or not, readers are trained to understand a story that obeys these unities as being about the protagonist. When read in terms of how Cecilia changes or fails to change, A Projection seems to suffer for a lack of stakes. 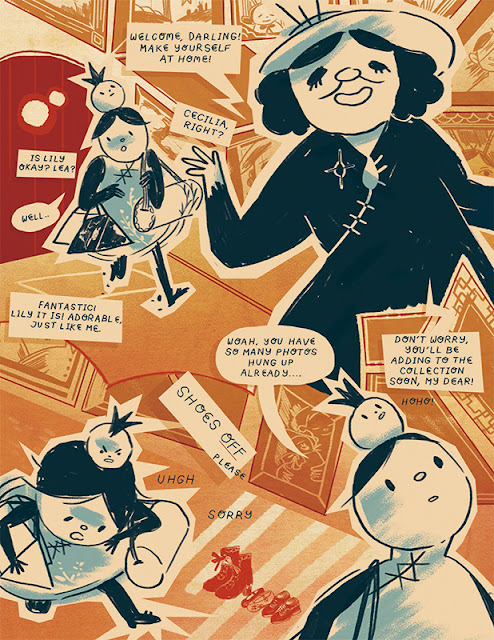 However, Cecilia’s photos and resignation lead Baba to realize that she and her family have been stuck in a cycle of mourning. It is unclear and frankly unimportant whether or not Cecilia is aware that Baba is going to convert the shrine to a playroom; for Cecilia, the story is about her and her work being disrespected. Hui uses conventional, Aristotelian narrative structure to foreground Cecilia’s story of struggle while hiding the story of Baba’s breakthrough.   As such, A Projection is a thrillingly ambitious rumination about the difficulty of understanding the roles one plays in the lives of other people.

One way that Hui establishes that readers should look past Cecilia’s linear plot when reading A Projection has to do with the book’s art. Much of the book looks like a two-dimensional depiction of a mixed-media assemblage. Things that have been drawn are juxtaposed with things that appear to have been painted or made from paper. Moreover, the minimal use of traditional panels implies a collage-logic at odds with the sequential logic we might expect given a story with such a clear beginning, middle, and end. Some pages feel crafty, like the pages of a scrapbook, while others feel like they are messing with perspective, time, and the path of the reader’s eye in the tradition of museum mainstays like Hannah Höch. Hui begins and ends the book as though this is a story about Cecilia’s bad job; however, in order to extract that linear narrative from the pages itself, one has to work. Hue imbeds – and even camouflages – Cecilia’s narrative into inhospitable, though routinely beautiful, pages, suggesting that, after working to decode such a narrative from the art, one should work again to identify what collage-like story might be embedded in Cecilia’s narrative. 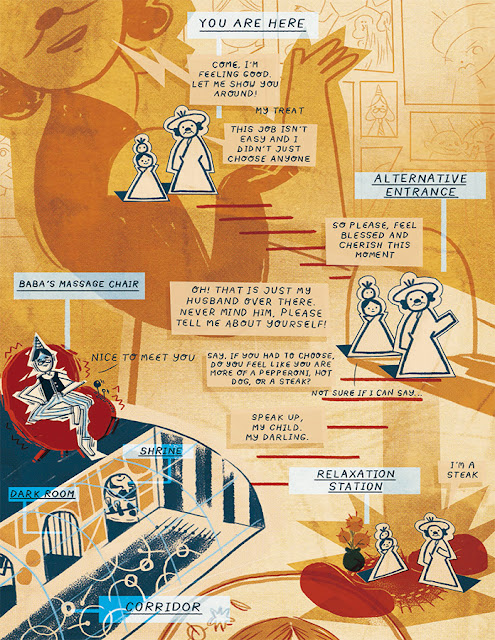 According to the role she plays in Cecilia’s story, Baba is a relatively flat antagonist; even as she says things like “I feel like a newborn baby,” her oppositional role to Cecilia does not waiver. She begins the story misnaming Cecilia and ends the story incapable of understanding ways that she has disrespected her. However, along the way, one is able to perceive, in ways that minimally matter to the oppressed and mistreated Cecilia, that Baba hires and abuses Family Photographers because of the death of a child whom only exists in one, poorly taken picture. If Hui had told the story of Baba’s transformation into an awful boss because of grief in a linear fashion, it would have had to happen so fast that the completeness of that transformation – one occurring over many cycles – would have been at cross-purposes with the moment of growth that happens when she sees pictures Cecilia has taken of the surviving children that somehow include the lost sibling, Sis. By making a reader work to decipher a sequential narrative from the not-particularly sequential art, Hui incentivizes a reader doing the inverse, working to think about how this story might be a single piece of the mosaic story of Baba. The result is compelling and real. Cecilia’s photographs of the family are, from her perspective, disrespected even as, from Baba’s perspective, they lead to a breakthrough where she is able to, for the moment at least, break the cycle of hiring new people while vowing to convert a room that had served as a monument to the past into a playroom to celebrate the present.

Another way that Hui signals the reader to look beyond the linear narrative with Cecilia as the protagonist has to do with the book’s structure. The endnotes suggest that the book is not a story but “a meditation.” The physical artifact of the comic is shaped like a parabola, bookended by pages including picture frames that are blank but for a set of eyes. At its exact center, Hui places a series of pages that are visually distinct from the rest of the art, a red-hued section where Cecilia develops the pictures of Sis. Despite containing, for readers willing to do the work, a tidy narrative that looks like it is about how Cecilia changes or fails to change, Hui’s formal innovations follow the form of a practice or obsession, something that has a beginning, middle, and ending that allows repetition as opposed to a beginning, middle, and ending that documents change. 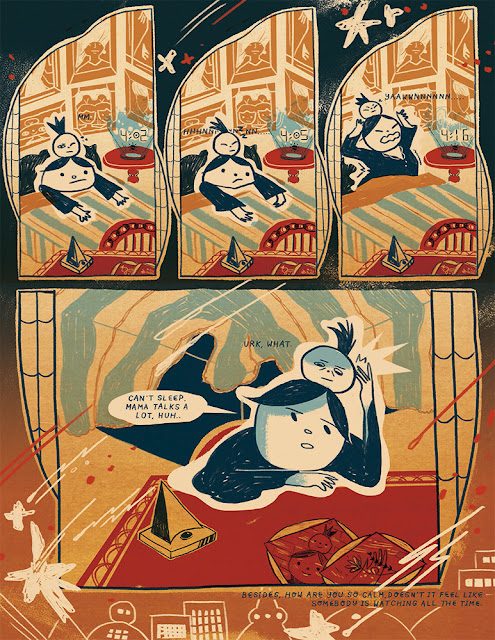 Finally, Hui projects Cecilia’s story – which a reader has to project onto the art of the book – onto Baba’s less tidy story by ignoring recent technological innovations in the medium of photography. Surely a person seeking daily documentation of her children and family would find that easier with the instant gratification and editing capabilities that come from working digitally. However, no one in the book acts as though the digital camera has been invented, relying instead on outmoded filmic techniques by which light is projected upon film that is, with the help of a chemical bath, projected onto paper. Beyond extending the projection metaphor in a number of interesting ways, Hui’s choice to stay analog does three related things thematically. First, the use of the darkroom makes the development of photos akin to memory, a kind of conjuring of the past. Second, because of the painstaking time required to develop photographs in this traditional way, it is easier to read Cecilia’s practice as a high art, a reading necessary to foreground ways that photography is hardly a neutral medium through which the world is depicted. Finally, the use of an old-school camera reminds the reader that the eye itself is a kind of camera. Early in the book, Cecilia complains to a friend that all of the photos on the walls of the shrine have eyes that are always watching her, a complaint that draws attention to all of the eyes in the pages that bookend the meditation and asks the reader to think about the ways one’s subjectivity necessarily flattens others into objects. 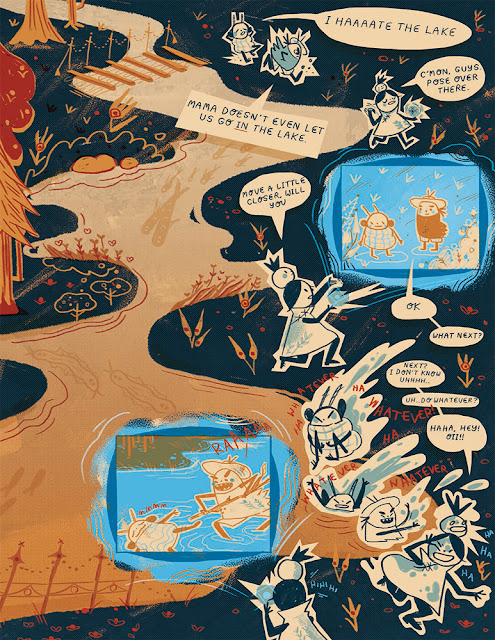 Ultimately, A Projection is hopeful and upsetting in equal measure. Something about how Cecilia sees the world through photography does disrupt Baba’s preconceived notions of what photography is supposed to do and, in the process, allows her a moment of non-linear growth. However, neither Cecilia nor Baba is fully aware of this exchange of the role that each of them has played in the other’s story. Hui asserts that, despite the obvious power that art has to foster true communication and recognition, humans far too often miss the point and seek out or make art that reinforces things they already believe to be true. If a reader, like Cecilia, enters this text expecting a coming of age story, there is a good chance that is what they will find. However, A Projection offers a number of clues that readers ought to resist what they think they know about this kind of story. By nudging readers to recognize and ultimately reject the way a book like this is supposed to be read, A Projection offers readers a chance to find something in the text that they were not already bringing with them. A Projection is a story about the power of art to offer the surprise transformation; just as importantly, however, A Projection is about how rarely human beings let it happen. Hui offers readers a chance to experience something that she, at least in part, withholds from her characters. 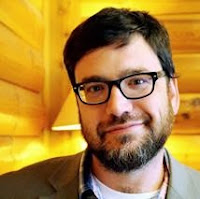 Matt Vadnais lives and teaches college English classes in Milwaukee. His comics-related work has appeared in Your Chicken Enemy and Comics MNT. He is the author of All I Can Truly Deliver.