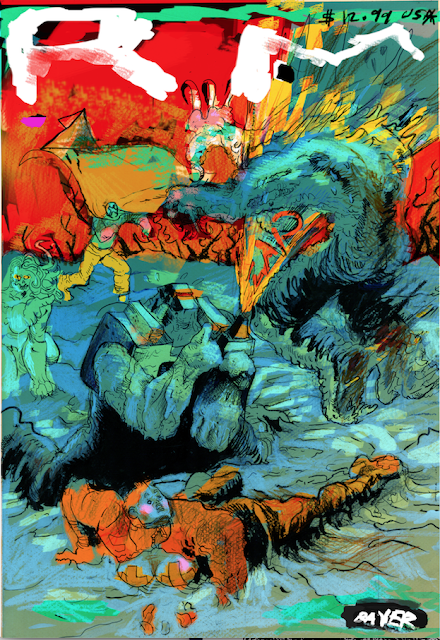 Josh Bayer's manic, scrawled art overwhelms the eye at first glance, daring you to immerse yourself in the images until the moment arrives that reveals a rock-solid sense of structure underlying all of its madness. His figure work can be as alien as it is familiar, the work of a cartoonist who has clearly spent hours studying a wide variety of comics art, merging any number of disparate influences in a single page. In one way, it’s as if Bayer effectively captures the energy of a comic drawn by a ten-year-old boy. One can sense the immediacy of each drawing and the simple urge to draw page after page, the images exploding out of his pen. That immediacy, even intimacy, is shored up by Bayer's obvious foundational skill and craft.

It is unfortunate that he is best known at this point for his All-Time Comics series with Fantagraphics. Those comics tend more toward teenage testosterone than a thoughtful reclamation, and they're a pale reflection of Bayer's latest, a reinterpretation of obscure Marvel comic books. In RM, he takes a couple of long-forgotten comic books and winds them into an intense and personal story about a disaffected kid obsessed with superhero comics. This "cover version" includes Bayer rewriting and redrawing the story from beginning to end in his own style. 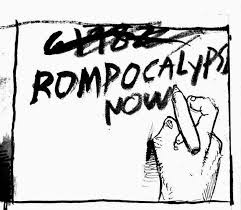 RM starts with the artist, his face obscured by a dark scrawl, furiously attempting to come up with a name for this very project. The reader gets a sense of the artist's impatience and frustration in trying to do something that's obviously important to him, until he goes the most direct route: simply calling his book RM and telling the reader that it's an adaptation of a comic written by Bill Mantlo and drawn by Sal Buscema. Some of Mantlo's sad story is related in the introduction by his daughter; he quit comics, became an attorney specializing in social justice, and got hit by a car while jogging. He is alive but requires around-the-clock care.

Mantlo was a Marvel workhorse in the late 70s and early 80s, writing as many as four titles a month and filling in on others. Like many writers of the era, he had a tendency to overwrite, with much of his prose turning out rather purple. At the same time, he was obsessed with social justice in his stories, even if he obviously felt the odds were stacked against people trying to do the right thing. As a result, his stories always had a grim, fatalistic quality. Rom was a comic based on a toy, which quickly became Mantlo's pet project--a fable about paranoia that later transitioned into an epic about how war inevitably scars all its participants. Buscema drew the initial run, and the pairing was fitting given his status as Marvel's workhorse artist. While known for his speed and the stiffness of his characters' body language, he's also a tremendous storyteller with a powerful sense of anatomy. One was never confused about what was happening in a Sal Buscema-drawn comic book, even if the art wasn't dazzling by the standards of the time. 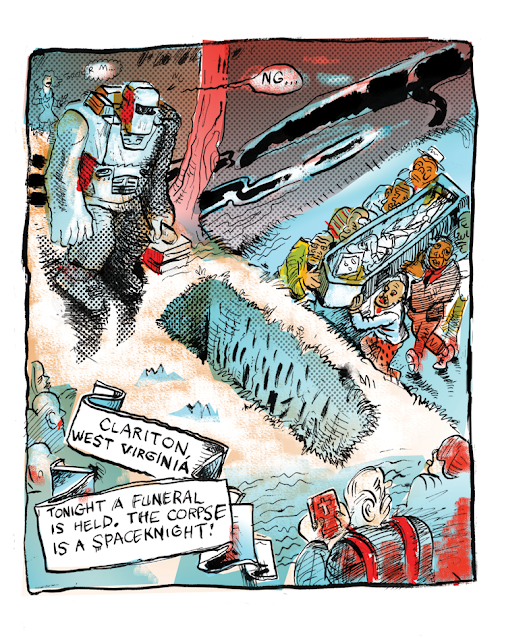 Bayer internalizes the solidity of that structure and storytelling in his comic; the quality of his line is obviously influenced by Gary Panter and Robert Crumb, but Buscema's figurework and storytelling sense shine through. That said, Bayer's art is so idiosyncratic that even when interpreting a specific artist's work, his own eccentricities pop up on every page. The silver, alien Spaceknight Rom here is a chunky, hulking figure frequently hunched over with sadness and resignation. The story is a typically downbeat Mantlo tale: Rom, after burying one of his fellow Spaceknights, flies off to a small town with a strange radiation signature, only to find a family dying of radiation poisoning. There's an obligatory fight with an old Hulk villain that is really a conflict about victimization.

Bayer infuses this story with skewed perspectives, grotesque figure distortions, odd beats of humor and a rawness to the proceedings that fit snugly with the original story but add a filthy, underground quality. He gently mocks some of the dialogue by slapping the word "Exposition" on top of it, but the essence of the story remains the same. His use of color only adds to the grotesque quality of the story; the sickly greens and bruise-colored purples are in stark contrast to the typical brightening effect color has in a superhero comic. reflecting the disease and rot explored in the comic.

The end of the story bleeds into the reality of a teen named Seth, who wears a ski mask that mirrors the helmet of his hero RM. The grotesque quality of the comic he's reading is reflected in his reality, with his mother disapproving of him reading comics and lecturing him. The irony is her critiquing him for reading "dark" comics, considering how miserable his daily life was with his family and doubly so at school. The ways in which colors and lines bleed into each other in this comic reflect the manner in which the downbeat quality of the comic bleeds into Seth's life. He runs through the halls of his school with his ski mask on as though he was a hero, but he's really just trying to outrun everyone making fun of him. His real world has the same sickly, unpleasant colors as his comic book did, reflecting the role of comics in his world as a mirror, not an escapist fantasy. 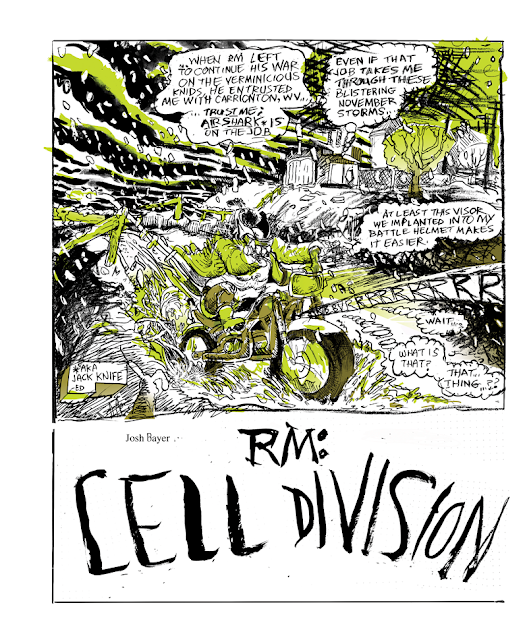 The second half of the book, "RM: Cell Division", begins with another Bayer "cover version" of a Marvel comic, this time Rom 31-32. Bayer has a real eye for the weirder and more unsettling Marvel comics of the 80s, and these comics are some of the darkest of that era. Rom was in many respects an ode to the paranoia of 1950s (and later 1970s) science-fiction, as it was about a cyborg from space hunting his enemies, a race of shape-shifting aliens who had infiltrated the earth. When one of them had a child with a human mother, he became an H.R. Geiger nightmare named Hybrid. Rom teamed with various mutants to stop the creature.

Bayer took those elements and reshaped the characters. Hybrid was now Metastasis, a word meaning an incurable cancer that has spread throughout the body. The mutant Rogue is now a Wendy O. Williams lookalike, while Mystique becomes a dead ringer for Fletcher Hanks' Phantoma. This is a typical Bayer technique: taking familiar characters and connecting them with either punk imagery or else idiosyncratic comics characters. Apart from these stylistic changes, some dialog changes (much less exposition, much more dialog in actual vernacular that sounds like a real person would say), a few story details being condensed, and, of course, Bayer's own blocky, dense, and grotesquely comic interpretation of the characters, the story unfolds pretty much like the original issues did.

Details like Metastasis taking some convicts who happened upon his house and flaying the skin off their bodies or his plans to turn mutant women into "breeding sows" in his rape camps are straight from Mantlo in comics intended for children. (Comics Code approved!) Other details, like Metastasis tempting Rom with pleasures of the flesh, are also straight from Mantlo. 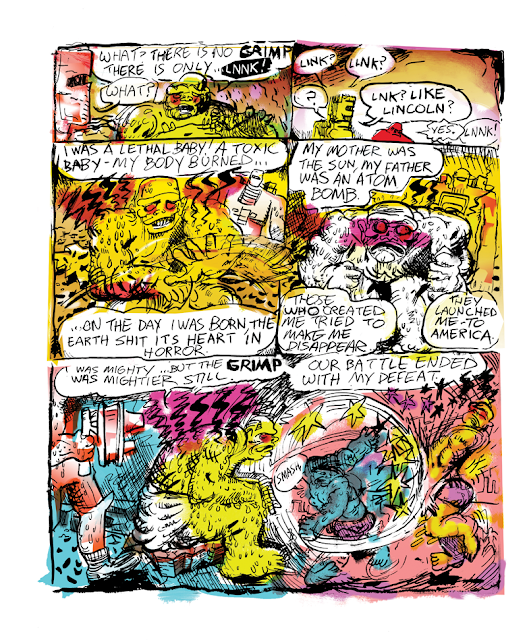 Bayer veers from an open page format with no panels to hand-drawn panels. He carefully employs a lot of negative space in order to let his drawings breathe a little and to make the otherwise blocky aspect of his figures more legible in terms of their actions on the page. Bayer is once again interpreting the drawings of Sal Buscema here, a master storyteller in terms of pacing, panel-to-panel transitions, and clarity, and he maintains these aspects of the original art while putting his own unique stamp.

The backup story to "RM: Cell Division" features Seth reading this issue of RM in class as part of the larger drama involving his status as an outcast, his desperate desire to connect with others, and his anger at being rejected. When his teacher has her concert tickets stolen from her purse, the other students immediately suspect Seth who is cagey until the end and beyond. In this world, that suspicion momentarily makes him popular--a fact that he understands and completely rejects. For Seth, popularity is less important than his own personal sense of integrity, another key touchstone of punk. 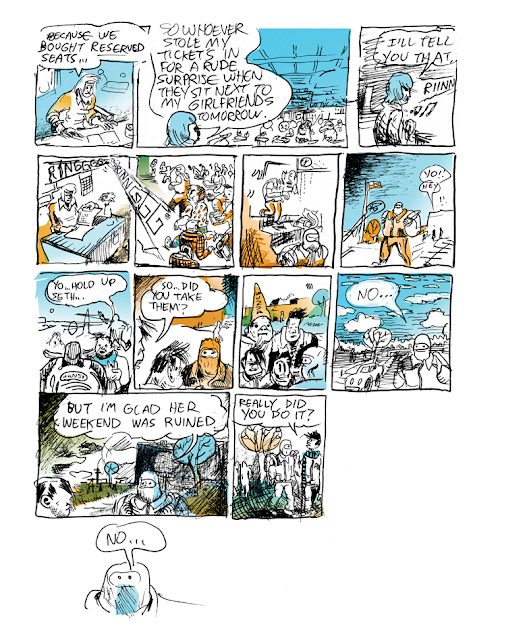 RM reflects the punk aesthetic in the sense that it strips away pretension in favor of reality. Seth's reality is grim and unpleasant, but he's come to terms as to what kind of life he wants to live. He takes solace from the uncompromising harshness of the comics he reads, even if no one else cares about or understands them. These are not unfamiliar ideas, to be sure, but the way Bayer subsumes these ideas entirely within his explosive and non-intuitive color sense and his seemingly-frenzied scrawl on each page reveals a rich visual language that amplifies and distorts its text.