Quick Reviews of Two Books you may be interested in,
both of which have the word “Woods” in their title. 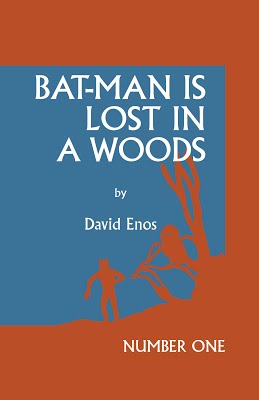 On the periphery, there is always the woods. For many they are “lovely, dark and deep.” For others, they are a place where one can “live deliberately.” But for some, the woods are wild, unfettered, where the witches dance, the place outside the social order. For those people, the forest is as much about possibility and mystery as it is about freedom. The woods are poetry and the procreant urge.


Weird shit happens out there in the trees.


David Enos’ Bat-Man is Lost in a Woods embraces this sentiment fully with pages of painted panels that squeeze you right between that which you know and that which you envision. It stands heroically both within and without, one foot in dreams, one foot in some other place. That which is familiar is now seen anew. 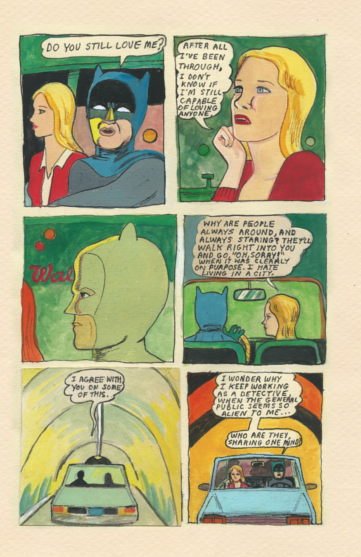 There is a narrative to Enos’ work. Publisher California Clap has the following solicitation for this book: The greatest mystery Bat-Man has ever faced may be the disappearance of his wife, Amity.  The wooded acres surrounding their castle home offer few clues, and months of searching have led him no closer to the truth.  In a case of this nature, even his unmatched investigative techniques may not be enough. Yet this description allows access only, an opportunity to reference and to put up walls. Bat-Man is Lost in a Woods gathers familiar objects in order to provide a map into reverie. This is not super-heroics or even a plotted out here-to-there. It is Lynchian, a blurred Magritte, full of plaintiveness and unease. 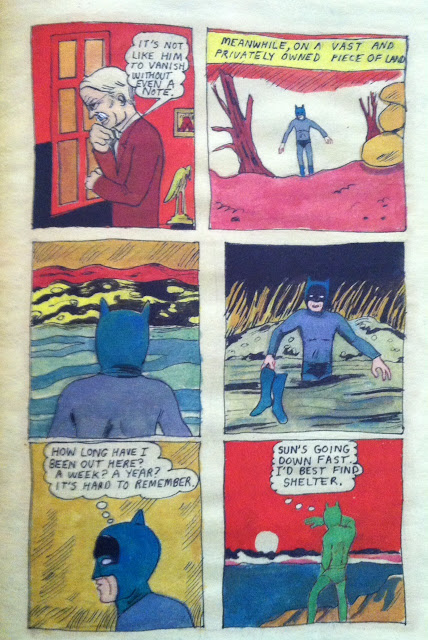 Enos’ art is static, flushed with the colors of bile and dissociative nightmares. His Batman throws us back to the comfortable Adam West iteration of the hero, but removes the campiness and replaces it with a fugue state. The hyphen Enos adds to his Bat-Man forces the dichotomy that has always been at the heart of the character. Here, though, the pause between the two words becomes the focus.


Bat-Man is Lost in a Woods is a right brain book out of left field, shepherding intellectual property out of the city and into the forest. Where you stand is in the middle, smiling and shaking your head in the end. 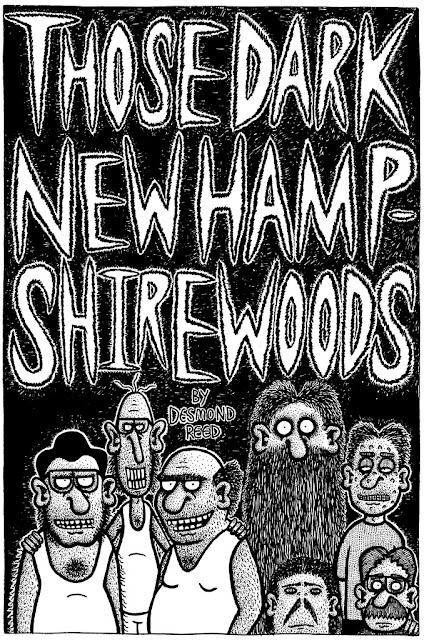 Throughout history, humans have viewed the woods as place where strange, mythical, magical creatures cavorted and/or abided in wait. Denizens of the forest were conceived as beings who were infused with the impossible, capable of granting wishes or tearing us apart. They were to be wary of, as they were not like us at all.


In Desmond Reed’s world, the creatures of the woods are entirely all too human.


Within its 112 pages of meticulously tight and outlandishly subversive black and white pages, Those Dark New Hampshire Woods collects Reed’s previously available five standalone mini-comics into one package providing commentary on itself and creating a world of its own, a world populated by Scumbags, Perverts, Uncles, Drifters, and Troubled Teens, all watched over by a “Strange Being” and a “Mysterious Old Woman”. Everything intertwines and Reed holds it all together by his world building there in the woods of New Hampshire. 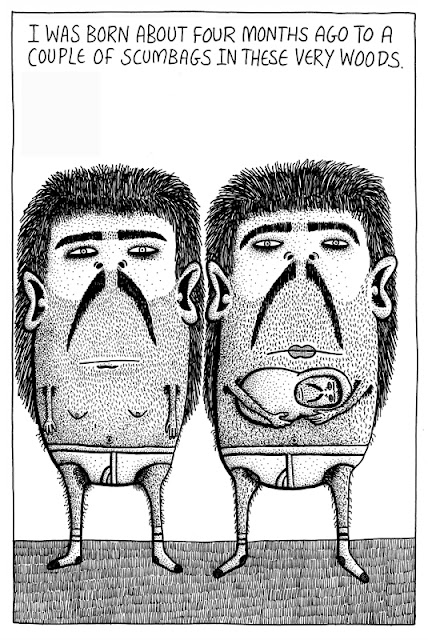 In Those Dark New Hampshire Woods, Reed’s intent is clearly to entertain. Larger themes of community and isolation, the responsibilities and dynamics of the parent/child relationship, and power struggles inherent in gender classifications are inadvertent side roads that Reed stumbles upon in his journey to amuse. The presence of these ideas seems to end up being more a function of setting up a punch-line than any thought of exploration. Reed wants you to laugh along with him at his weird off-kilter jokes.


What separates Those Dark New Hampshire Woods from a collection of freak-gags, though, is the fastidiousness of Reed’s meticulous lines. Though his characters are outlandish and exaggerated, the detail work is fine and precise. His backgrounds are immersive. Trees have depth, clapboards have texture, body hair is everywhere. The juxtaposition between intricate and bonkers gives anchor to your eye; you linger on Reed’s pages even though the content is light and quickly passed over, reminiscent of some of Noah Van Sciver’s short shots in Blammo, or some of the wilder work of Jamie Vayda in Loud Comix. 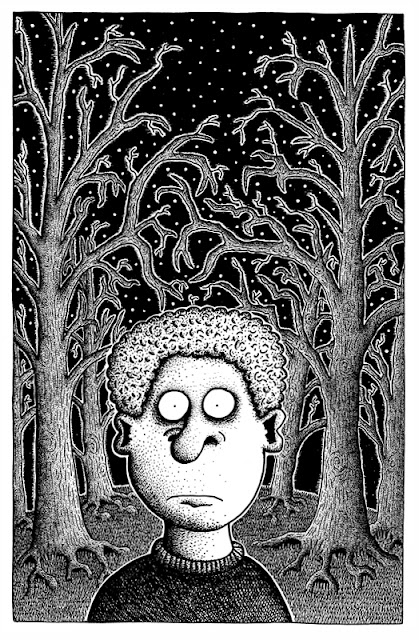 It’s hard to tell if ultimately Reed wants us to sympathize with or mock his creations. As I said above, his dwellers in these woods are a spot on in terms of their reflection of some of the more loathsome aspects of ourselves. Although it appears the mirror Reed is holding is of the Fun-House variety, still it is hard to laugh at your reflection in this harsh light.

Those Dark New Hampshire Woods is an odd collection of strange, entertaining stories that serve as a vehicle for Desmond Reed’s artistic talents. Reed is a creator to watch as he develops more what he wants to do with his gifts.