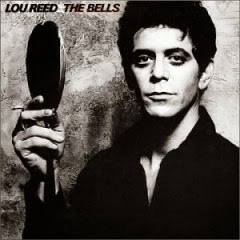 This is a hard album to take seriously. It is full of pompous missteps and grandiose failures, but it is quintessential Lou. For me, this album marks a turn in Lou's career as an artist.

From The Bells forward, his albums will suffer from a slew of such head-scratchingly bad songs (anchored between works of genius) that you have to wonder if he was doing it on purpose. Lou had puffed himself pretty far by this point, thinking he could do no wrong. But he was wrong, and many of the songs on this album were wrong too.

For some reason the critics loved The Bells. I often forget that it even exists. Lou perplexes. The Bells does too.
Best Songs:

All Through The Night – So you're hanging out at a bar talking with Lou, listening to Lou on the jukebox. This song throws you on many levels. It's a sad song. Longing, depressed, Lou hollows out his voice for this one. There's that horn beat going through it, grounding it while it expands. Where are we when we hear this song? Deep into our own dreams, perhaps.


Disco Mystic –  This is a song that obviously comments on the pervasive attitude of rock in the late 70's and Lou here is... no... I can't... Seriously... Disco Mystic