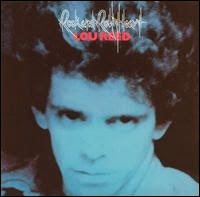 Lou's first album for Arista Records, and his seventh solo studio release, is a weird album. You get the sense that Lou has come into his own – well, his “own” is kinda the wrong word to use with a guy like Lou – let's just say that he's found a voice that works for him.

Lou says that he wrote most of this album in the studio. He supposedly took one month to record and mix it. It has that sort of sound.

Temporary Thing – When I was in college, I had a radio show on the small station. I was drinking a lot at that time and had some foul anger issues going on in my head, but that was what the 80's were for a lot of us. I called the show “It's Just A Temporary Thing”. This song was the theme.

Lou is a pompous ass in this song, as he is in many of his songs. Something about the arrangement, the focus on the piano and the drums, really pushes this song to a new level, though. There's almost a dirge sensibility. Oh, and the guitar at the end of the song? That perfect note of feedback? Yeah, this is one of my favorite Lou Reed songs.


Vicious Circle – Another asshole song from Lou. His deadpan delivery here is perfect. If you ever have had the chance to listen to the band The Silver Jews, you might think that this was the only rock song David Berman listened to in his life. It's short, it's to the point, and it ain't pretty.


Rock and Roll Heart – The title track. This one is all over the place. The opening chords firmly place it as something heavy and visceral, but then Lou starts telling us that he guesses he's “just dumb” because he knows he's “not smart” but “deep down inside” he's “got a rock n' roll heart” which, according to Lou's philosophy, means he has to search for "a good time". It's an anti-intellectual song from a self-professed rock poet, a man who prided himself so much on being that much smarter than you. So what? So Lou? So go fuck yourself. Heh.