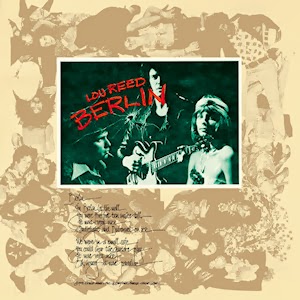 Having established himself as a relatively marketable commodity with Transformer, Lou then put out one of my favorite albums of all time. Berlin is a concept album all the way down. I remember I had just read F. Scott Fitzgerald's short story “Babylon Revisited” right before I first heard this album and, for me, the parallels between the two stories stuck.

This is a gloomy album – beautiful, decadent, and over-wrought at times – but in terms of an artistic achievement it takes the Rock Concept Album and pushes it up about seventeen pegs. Oh Lou, you cut right through me.

This album really needs to be listened to as a whole and cherry picking songs seems antithetic to intent, but here you go anyway.

The Kids – tells the story of one of the lead characters having her children taken from her “because they said she was not a good mother”. Lou then goes through the list of why people might think this. The narrator declares himself The Waterboy (which supposedly is where the band The Waterboys got their name) as his heart is overflowing – but he's tired too and he also revels in the suffering of the woman. It's complex and the ending of the song is heart-wrenching.


The Bed – Geez, I forgot how fucking depressing and beautiful this album is. This is the penultimate song on the album in which Lou outlines the destruction caused by the narrator's relationship and the subsequent suicide of the female “protagonist”. The way Lou sings “What a feeling” crumbles me every time I hear this song.


Sad Song – the final song on the album. It flows right out from The Bed and, with some light wind instruments, changes tone. Is this rebirth? Is this to be redemptive? Are we supposed to feel for the narrator because “Somebody else would have broken both of her arms”? Naaah. Fuck this guy.