Poets You Should Know -- MICHAEL MARTONE 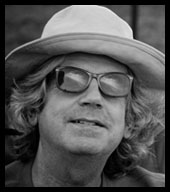 Michael Martone is currently a Professor of English and Director of the Creative Writing Program at the University of Alabama where he has been teaching since 1996. Before that, he taught at Syracuse University, Iowa State University, and Harvard University. He lives with the poet Theresa Pappas and their two sons Sam and Nick.

Martone was born and grew up in Fort Wayne, Indiana. He studied at Butler University in Indianapolis and graduated from Indiana University with a degree in English. He is also a graduate of The Writing Seminars of The Johns Hopkins University.

Martone is the author of five books of short fiction including Seeing Eye published in September of 1995 by Zoland Books as well as Pensées: The Thoughts of Dan Quayle (Broad Ripple Press, 1994), Fort Wayne Is Seventh on Hitler's List (Indiana University Press, 1990), Safety Patrol (The Johns Hopkins University Press, 1988), and Alive and Dead in Indiana (Alfred A. Knopf, 1984).


A VILLAGE
"Who dreamed us here?" the inhabitants of this village ask in their dreams. They try, upon waking, to renegotiate the covenants inherited from their ancestors--the dazzling hue of their houses, the shifting distribution of the neighborhoods. Their undreamed dreams accumulate, cloud the black, black night with sparks of color. They forget to ask. They ask. They forget they've asked. They ask. Who smudged out the road that was never there? Who erased the sense of a sense of direction? They dream: "Who dreamed us here?" "Did you?" they ask. "Did you?"