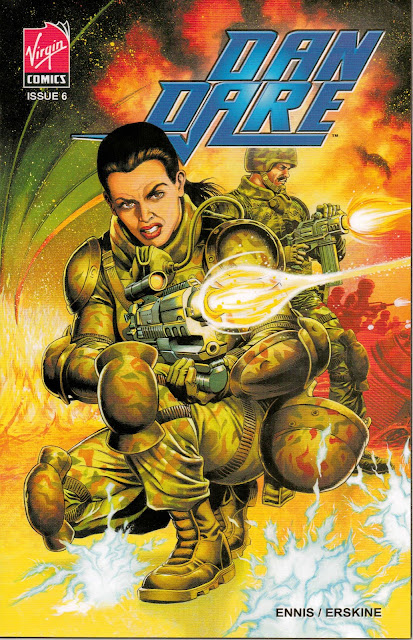 DAN DARE NEVER LIES.
In May of 2008, there was all kinds of bad mojo floating around the continents.

An oil pipeline explosion killed 100 people in Ijegun, Nigeria. Bombs went off in Jaipur, India killing 216. A 7.9 scale earthquake hit south-west China and killed over 69,000. Cyclone Nargis killed over 133,000 in Myanmar. Harvey Korman and Sydney Pollack died. The shows Lil Bush and Beauty and the Geek were canceled. Then Bloom Blox is released for the Wii.

Still, amid all this May 2008 death, there was a brief of flash of life. This came in the form of Virgin Comics release of Dan Dare #6.

It seems to me that this was enough to keep us all going.

Whatever the motivation, what they created was magic. Why Dan Dare #6 was sitting in the bargain bin in my Local Comic Shop is beyond me. I think this fact, in and of itself, is a commentary on the nature of what our society has become.

Or maybe as another gift (thank you Sylvia Faust) the comics Gods still feel bad about that whole Whisper thing I had to endure? I mean, just look at the very first page. 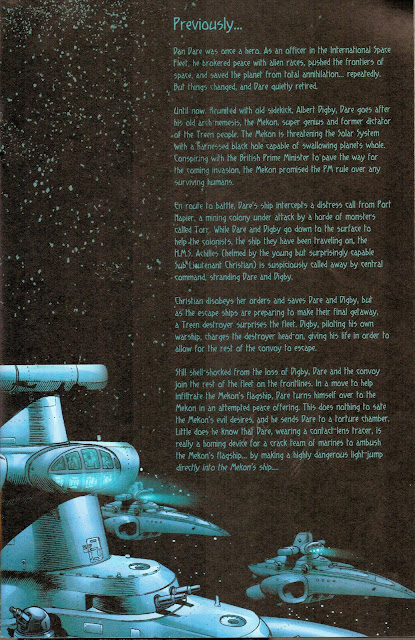 AN ENTIRE PAGE DEVOTED TO CATCHING UP NEW READERS.
AN ENTIRE PAGE
IN THE SIXTH ISSUE OF A SEVEN ISSUE MINI-SERIES!
Dan Dare #6, if you were a monkey I would let you fling your poo – at children.

Those of you that have read this column in the past know that I am constantly coming back to this issue – comics should do a better job of soliciting new readers by providing context to their story-lines. Every comic has the potential to be someone's first. Why not welcome these new readers?

Do what Dan Dare Does. Dan Dare #6 provides context with panache and instantly ingratiates itself into my brain. How hard was that?

So what has been going on in the previous 5 issues?

Dan Dare, officer of the International Space Fleet, retired after saving Earth from “total annihilation.” When his arch nemesis, the Mekon (former dictator of the Treen), threatened everyone and everything with a harnessed black hole, Dare and his sidekick Albert Digby, set out to save the world again. After hitching a ride on the H.M.S. Achilles and meeting Sub Lieutenant Christian, Dare and Digby go through some hair-raising adventures which culminate in Digby's death from going kamikaze on a Treen destroyer. To try to broker peace, as well as infiltrate the Mekon's flagship, Dare turns himself over to his enemy who sends him to the torture chamber. Dare, though, is wearing a tracer, allowing a “crack team of marines” to make a light-jump into the Mekon's ship.

That sounds like five issues of awesome to me. I, for one, can't wait to see what happens next. 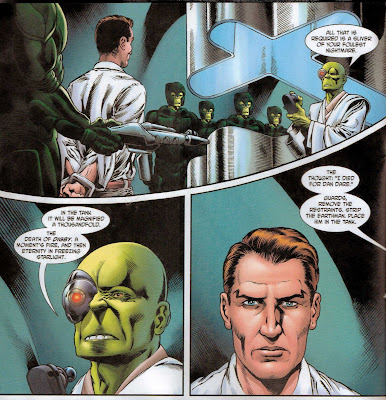 Dan Dare, though, seems entirely unfazed. Why? Because not only is he very, very cool, but this is also the moment the “crack team of marines” shows up and starts blasting.

As the marines clear out the rest of the guards, Dare says this to his Green Face torturer: 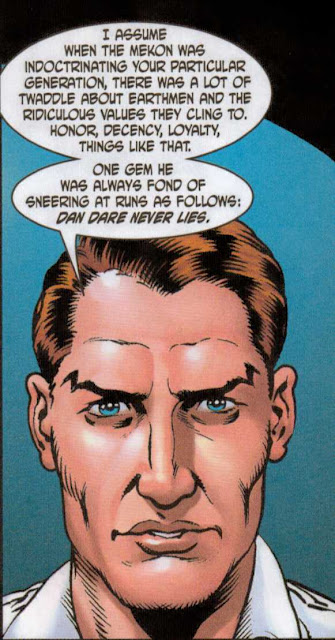 And I believe him.

Dare offers his torturer the option to cooperate fully. If Green Face chooses this option, Dare promises that he will not be killed, but instead be treated decently as a prisoner of war.

Green Face frees Dare. Dare repays him with a solid right hook to the jaw. 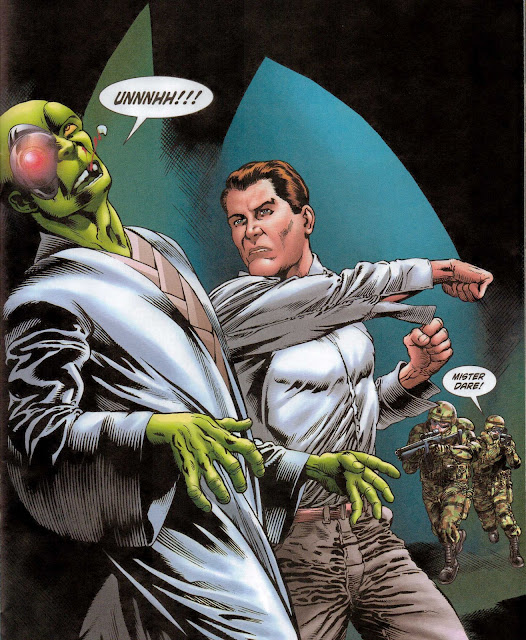 Right hooks are decent treatment, everyone. Go tell your mommy.

Now freed, Dare starts giving orders. The first one, take out the WMD that the Mekon has been using to threaten the solar system – the black hole. 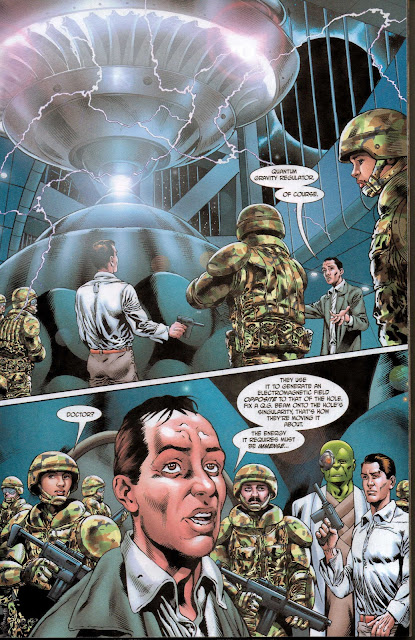 Excuse me. I meant the Quantum Gravity Regulator. In order to end the threat, this Doctor must “turn up the E.M. Field to maximum gain” which will neutralize the black hole, and then jam the machine so it stays that way. Which he does. With a grenade. In the middle of a major fire-fight.

Awesome. Thank goodness the Doctor is IN!

Dare and his men are able to escape. Word of this gets back to the Mekon. He's none too pleased.

Gaaaah! I bet this guy has a hard time getting dates.

In order to finally take it to the Mekon, Dare pulls a page from his buddy Digby's playbook and tells everyone that they're going to go straight at him. 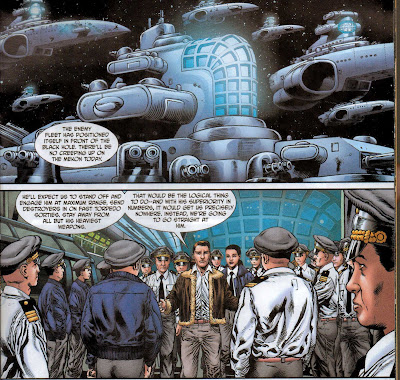 Have I mentioned how much I love Dan Dare's leather bomber jacket? I should really get one, so I can swagger around like nobody's business and say things like, “Dan Elkin Never Lies.” Imagine the respect I could get.

Anyone, Dare puts sub-lieutenant Christian in charge of the ship, and they go All Balls In! 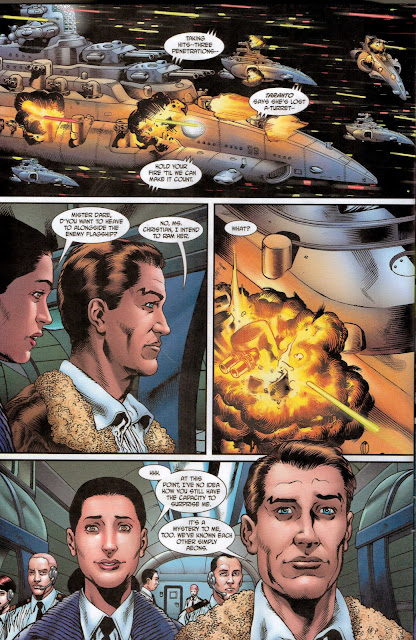 This strategy seems to work as planned and Team Dare cripples one of the Mekon's Battlecruisers. 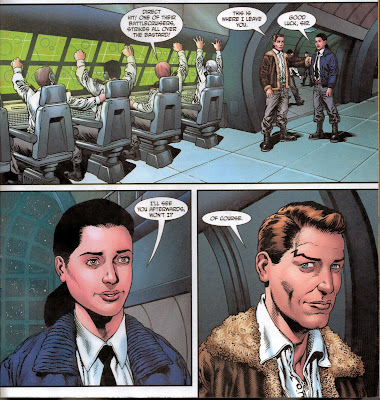 And there was much rejoicing.

There seems to be this sexual tension between young sub-lieutenant Christian and our man, Daddy Dan Dare. This may or may not be creepy, depending on your view of older men hooking up with younger women. It worked for Harrison Ford in that last Indiana Jones movie (he was wearing a leather jacket), but if you look at Hef's life lately you can't help but shudder.

Still, the comic ends with Dan Dare addressing the marines that will be accompanying him on the final boarding party blast-up. 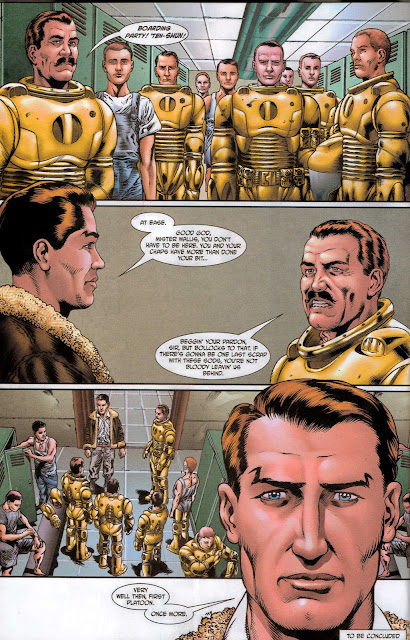 You got to love the British nonchalance of Dan Dare and the rest of these blokes. Here they are, about to teleport into the enemy's own ship and it's almost as if they are discussing the results of the latest cricket match or which Indian restaurant serves the best Navaratna Korma.

I love this comic. Dan Dare is my kind of hero and a throwback to an era of cool that just doesn't exist anymore. Why has a calm demeanor in the face of adversity disappeared in our heroes, replaced in favor of all that yelling that happens nowadays? What happened to our quiet action hero? Our classy action hero?

What does it say about the shift in our values when we move from calm and controlled to screaming and chaos? I mean, I found Dan Dare – hero extraordinaire – in the bargain bin, for cripes sake. He deserves far better than that. This is a character who embodies the values that I admire in my heroes.

And this from Garth Ennis. You know Garth Ennis, right? He's the guy who brought you this: 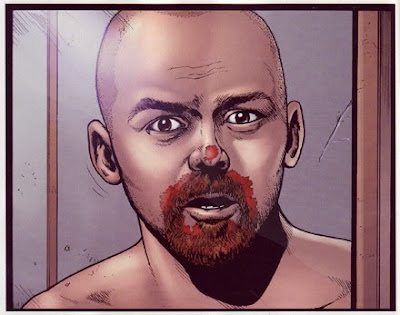 I have come to expect things like this from Ennis. Something about the Dan Dare character must have struck Ennis though, as there is nothing puerile or gratuitous about him. Ennis captured this fellow's heroism in a manner that just exhales “class”.

Hmmmm.... Maybe that is why it ended up in the bargain bin.

To all of our detriment.

Post Script: I did some research and apparently Dynamite Entertainment felt as strongly about Ennis' take on the adventures of Dan Dare as I did and has released the full run in trade format.