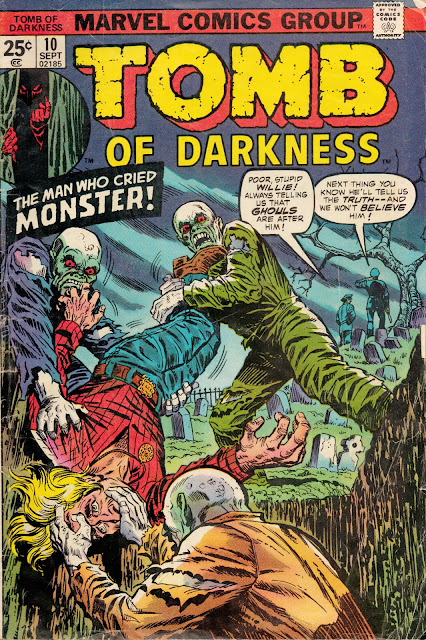 AAAAEEEEEH!
Horror comics are an interesting sub-genre of the comic book world. Unable to rely on jump-scares or atmospheric soundtracks, creators of horror comics must master the art of building tension and be able to plumb the depths of the collective unconscious in order to unearth our deepest jibblies.

It ain't easy to do. It takes talent to be creepy in comics, and there are only a handful of people who can pull this off well.

Why am I talking about this? Because this week's Cheap Thrills pull was a tattered and torn copy of Marvel Comics' Tomb of Darkness #10 from September, 1974.

Ah yes, September of 1974, when the corpulent, cigar chewing, bald men who made the Television decisions of the times finally made some good ones. Land of the Lost, Rhoda, Chico and the Man, Police Woman, and THE ROCKFORD FILES (one of my all-time-favorite shows) all made their debuts, and lordy, lordy, lordy weren't we all the better for it.

Also airing in September of 1974 was a made-for-TV movie called Born Innocent, starring Linda Blair, which featured the first broadcasting of an all-female rape scene.

In music, The Jackson 5 released their album Dancing Machine, Supertramp released Crime of the Century, and Tavares released Hard Core Poetry. Uriah Heep's Gary Thain was also electrocuted on stage in Dallas, Texas. So there's that.

It was September of 1974 in Ethiopia that Emperor Haile Selassie is deposed, creating some serious Rastaman Vibrations.

Meanwhile, in America, then Marvel Comics' Editor-in-Chief Stan Lee was raiding the old Atlas Comics vaults trying to turn a new nickle off of old weirdness. This lead to the publication of Tomb of Darkness #10, a compilation of five short horror pieces from 1950's comics like Adventures in Terror, Uncanny Tales, and Adventures into Weird Worlds, repackaged with a snazzy new “zombies hate hippies” cover by Larry Lieber. 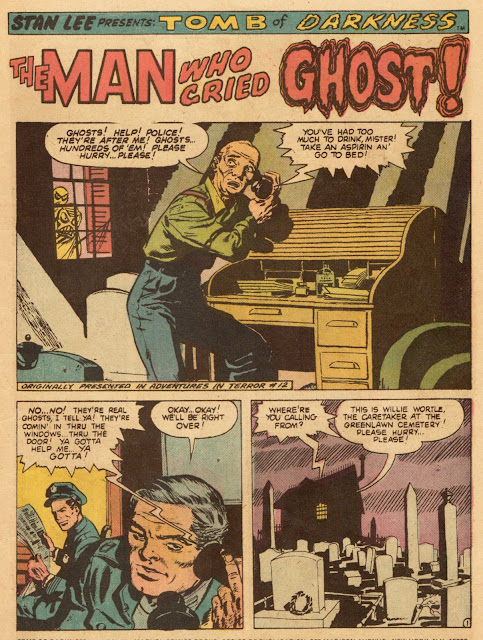 As you can see, “The Man” in question ain't no medallion wearing long-hair at all (as this story was from 1952 B.H. – Before Hippies), but is instead one Willie Wortle, Caretaker at the Greenlawn Cemetery He's seriously panicked as there are some freaky looking yellow entities glaring at him from the window.

The skeptical large-headed cop with rather hairy hands sends a squad car to investigate.

The officers arrive quickly and, pulling out their guns, head towards the house.

Ed Robbins was responsible for the art on this story back in 1952, and he certainly was able to build the requisite spooky tension in just a few panels

The officers approach Willie's door when the door suddenly slams open. You can almost feel one of the officer's testicles tighten as taut in his shorts as his trigger finger does on his gun as he exclaims, “Holy Smokes!” 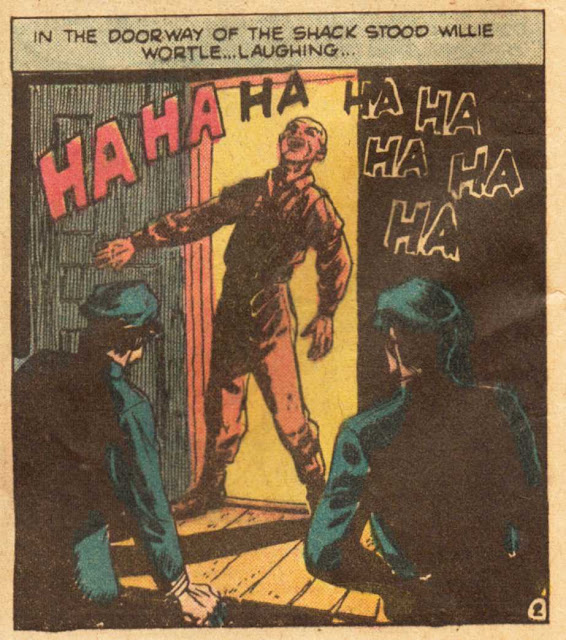 Hold on a minute. What were those freaky yellow entities floating in the window in the first panel all about? Foreshadowing, perhaps?

OK. We know where this is going, right? The title alone lets us know that we are playing with a well-worn trope here.

I gotta hand it to Ed Robbins, though. Even though we know what is going to happen, he still manages to creep us out. Check out this panel from Willie's next call to the cops: 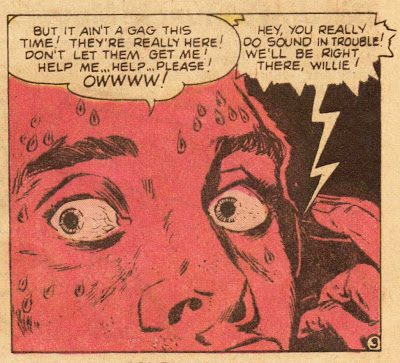 This is the last panel on the page. You have to turn to the next one to continue the tale. Even though you know this story by heart, you don't know is what it is going to look like. That's called tension building, my children.

This phone call is, of course, another prank, and Willie gets his giggle kicks at the expense of the officers. At this point you would think they would have “accidentally” shot him or at least fined the fuck out him for wasting their time.

The story ends as you would expect. Willie calls one more time:

You knew it was going to happen, but it is still kinda creepy – what with the way Willie is being taken out the door, and the fact that the ghost on the right looks a lot like Nixon (a frequent visitor to my nightmares). I was seven years old (or as we said in Texas, “knee-high-to-a-grasshopper”) when Tomb of Darkness #10 was published. I imagine that given my sequestered upbringing and my fear of creepy shit (remember the Mel Brooks movie Young Frankenstein? Scared me. Darth Vader? Nightmares. The Vampire episode of the show Get Smart? Slept in my parents room that night), I'm sure this would have unhinged me for weeks.

Thank goodness I've grown up to be such a courageous adult.

So as I said, Tomb of Darkness #10 is a compilation of short horror comics from the 50's. Another story is this one: 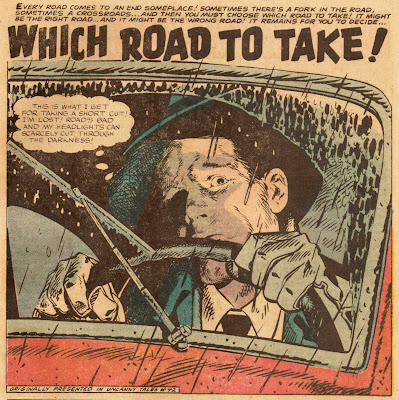 I love this panel. Bill Benulis was the artist here, and he really nails this one. It looks a little like a Lichtenstein.

This one starts with a tired guy. He's driving through the rain. Not a good combo in real life, but in a horror comic? We got ourselves an A-1 set-up going on.

Tired guy decides to err on the side of caution and pull over on the side of the road to rest. As he begins to drift off to sleep, he laments his boring, lonely life and his desire to find “the right girl”. Though his head “begins to nod”, he can't sleep. He decides to chance it and drive a little farther to perhaps find a hotel.

He begins his “journey through the night again” and comes to a crossroads. Here he can choose between heading to one of two towns, Penally and Fentown. Interestingly, he chooses Fentown. 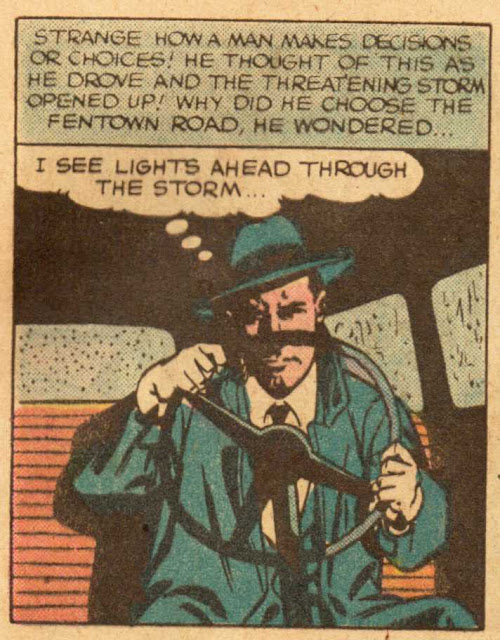 Once again, this is called building tension.

Here in Fentown he meets a “nice girl”. 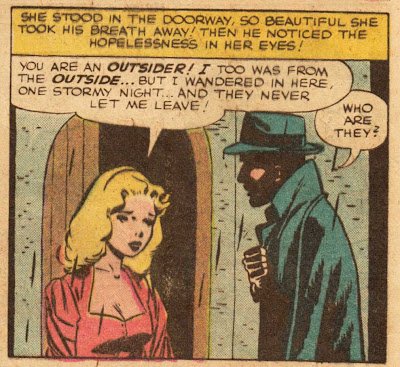 “They” happen to be a coven of Sorcerers who have a fondness for cowls and hipster styled facial hair, and they don't take kindly to strangers in their midst.

Lonely Guy grabs Maria and makes a run for it. The Sorcerers use their hipster hoo-doo to command fire and water to try to stop them. Maria tells Lonely Guy that by his side, she's “not afraid any more!”

And suddenly... Lonely Guy wakes up behind the wheel of his car.

What the fuck? I hate “And It Was Only A Dream” endings! It's weak at best plot contrivance and the sign of lazy, lazy writing.

Aaaah, but there's two more panels to this tale:

The last tale I want to share in Tomb of Darkness #10 is sort of the polar opposite of “Which Road to Take”. This one was originally published in a comic called Adventures into Weird Worlds #6 from 1952. 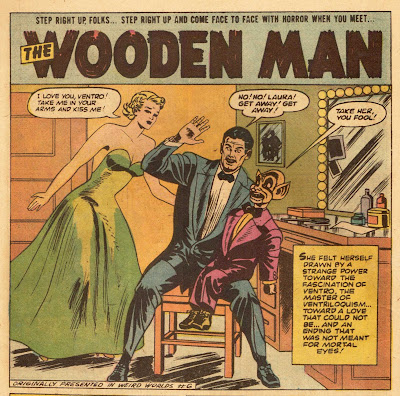 Yea, I said that. I'm not sorry, either. There's something sad and weird about them. Something downright creepy. Did you ever see that fucking freak fest flick, Magic, with Anthony Hopkins, Burgess Meredith, and Ann Margret? I did. When I was 11. It totally warped my sense of ventriloquists and I've never looked at them the same.

So here we are in Tomb of Darkness #10 with a short story about ventriloquists. This one is gunna fuck me up for weeks, isn't it?

The story revolves around this Chic Young Blondie wanna-be named Laura who, upon seeing an advertising poster, falls instantly in love with Ventro the Great (yes, the ventriloquist's name is Ventro. *sigh*). She must be overtly salivating or unhinging her padded Maidenform in the front row of the show, because Ventro notices her in the middle of his act. So obsessed with Ventro is Laura that she sneaks into his dressing room after the show (just as an aside, how many ventriloquists have stalkers? I think a quadruple amputee could count them on his fingers).

Ventro's dummy is named Kevin, and he's a bald, pointy-eared freak in a purple tuxedo. Kevin keeps goading Ventro to reciprocate Laura's rather aggressive advances, but Ventro stays aloof, seemingly suffering from chiraptophobia. It's that fucked up ventriloquist dichotomy bullshit – he can only express his inner desires through his plastic pal.

Laura believes this crap as well and continues to pursue a relationship with Ventro [“It's like in Cyrano de Bergerac!”], taking the dummy's professions of love as reality and Ventro's aloof stance as his personal struggle to constrain his lust for her – or his going on some sort of a Kim-Jong Il (eun?) power trip – or something. Laura is pretty pathetic in this regard, the more I think about it. 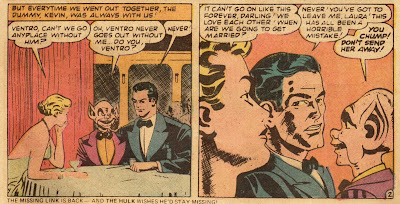 Now what? She wants to get married? Ventro wants to call it all off? Kevin pleads with Ventro to kiss her?

Finally, Laura's goes full blown bunny boiler nightmare bat-shit and demands an answer from Ventro as to why they won't get married.

He refuses to answer. 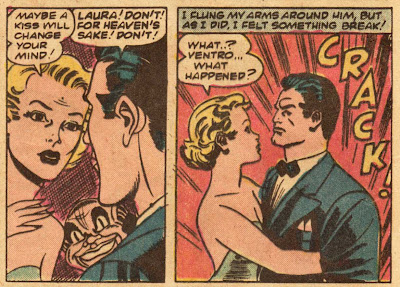 Is this a chiropractic malpractice suit waiting to happen? What is going on? 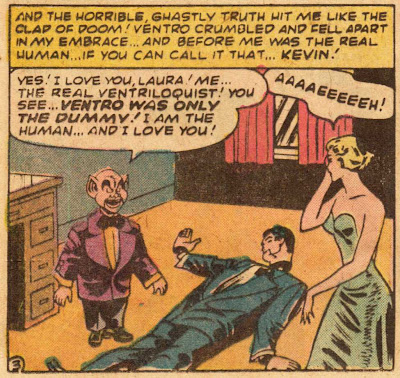 Fucking ventriloquists! Now I hate them even more. Of course this is the whole thing, isn't it. It's a horror comic. It's supposed to be horrifying. Fucking Kevin, pointy-eared little bastard.

And it's Laura's fault I had to deal with this in my head now, isn't it?. If she hadn't been so fucking obsessively crazy, none of this would have happened, and I never would have had to see this shit and have it burned into my frontal lobes to be a forever recursive nightmare.

There are two more stories in Tomb of Darkness #10, one concerning a brain washing gone awry and the other dealing with greedy children looking for their father's inheritance, but after that ventriloquist bullshit, I'm too spent to dwell on those.

I have to say that Tomb of Darkness #10 was worth my fifty cents. Like I said, it's hard to pull off good horror in comics, especially in short snippets like this. While nothing in Tomb of Darkness #10 scared the crap out of me, there was enough creepiness in it to scratch that itch. I'm sure if I read this when I was seven years old, though, I would have spent an unhealthy amount of time sleeping on the floor in my parent's bedroom, and would probably be paying for my therapist's Botax treatments.

There's a number of pretty good horror comics out there right now, and I really admire any creator that has the balls to pony up to this bar. It takes some serious craftsmanship to pull it off.

Comics can do things that no other media can. The very nature of the medium forces creators to think in creative ways. Horror comics are a great example of this.

So, Tomb of Darkness #10 – in 1974, you were probably creepy; in 1952, I'm sure you were downright horrifying; right now, I'm just pissed about that whole ventriloquist shit.

Let's never talk about this again.

See you all next week.