Pulling comics randomly from the Bargain Bin has certainly been an adventure. Sometimes I've unearthed some dusty and forgotten gems, other times I've had to try to suppress my gag reflex as I took a sizable bite out of a fecal sandwich.

After a year of writing this column, I've come to rely on three truisms:
1. Every comic is possibly somebody's first.
2. Just because you CAN make a comic book, doesn't mean you have to.
3. Comics Can Be Awesome!

I'm a gumbo. I'm a two-headed whale. I am flailing arms akimbo as the wind hits my sail.

The following is a reprint of the very first column I wrote for this concept way back in January of 2011.


Random Pulls from the Bargain Bin
In these economic times, finding inexpensive entertainment is difficult. Thank goodness for the local comic shop and a slew of comics nobody cares about anymore! Each week Daniel Elkin randomly grabs a comic from the bargain bin (for 50 cents) to see what kind of bang he can get for his two-bits. These are those tales. 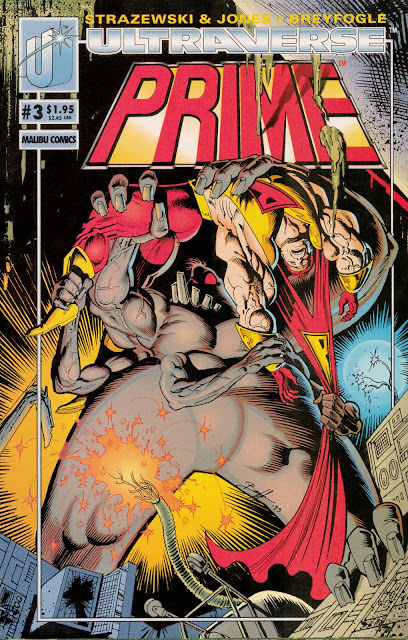 BLURP! PLAP! FWAP! FWIP! SPWP!
Ah, August of 1993. Reggie Jackson is enshrined in the Baseball Hall of Fame; Walter Koenig, Checkov of Star Trek, suffers a heart attack; Harrison Ford and Tommy Lee Jones are lighting up the screen in The Fugitive; the kids are grinding their hips in those halcyon sweaty evenings to Peace Pipe by Cry of Love; and mom and dad are glued to their sit-coms (Home Improvement, Seinfeld, Rosanne). Into this mix, Malibu Comics is hard-pimping their new Ultraverse Line to compete with those traitorous bastards at Image comics, and one of their flagship titles is Prime.

For those of you unfamiliar with Prime, the character follows a sort of Shazam prototype, thirteen year-old Kevin Green transforms into the ultimate super-hero: capable of flight, possessing super-strength, and seemingly imperious to harm, all the while being saddled by the emotional maturity of his nascent teenage years.

This transformation from Kevin to Prime occurs through a rather disturbing process of expelling a liquid goo from his abdomen which then encases Kevin’s body and solidifies into the Prime physique – adult features, disproportionately huge muscles, bulging veins, seemingly no neck, and a skin-tight red and gold costume complete with metallic wrist bands and a cape(?). 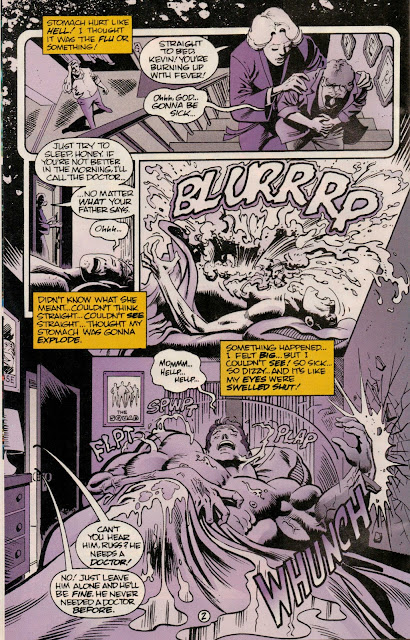 In Prime #3, this process is gratuitously rendered in a black and white and lavender (really, really lavender) flashback to what appears to be Kevin’s initial transformations. Apparently this process begins with the sound effect, “BLURRRP” as the goo ejaculates from his chest, closely followed by the sounds “FLPT”, “SPWPT”, and “PLAP” as the liquid solidifies around him, coalescing into Prime. In the flashback, Kevin remains trapped within the Prime body for long enough to smack a hole in the wall (with a “WHUNCH”), only to burst out of the Prime body with a “PLORP!” and a “CHFF”. After “shedding” his Prime body, Kevin then rips the skin to pieces and then flushes it “away before anybody could find it!” 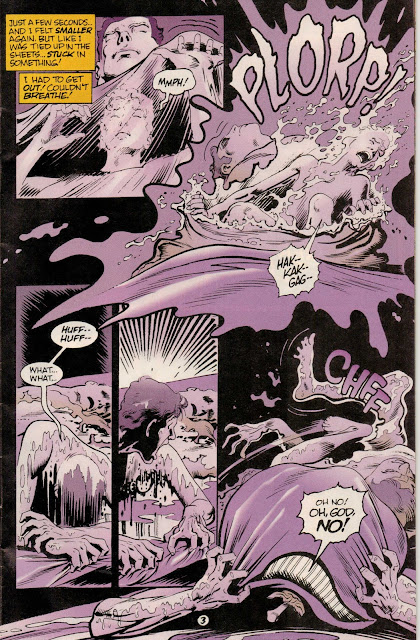 A 13 year-old boy shooting goo in his sleep that makes him a super powerful male, which he then flushes in shame? Really? Come on, boys – admit it – we’ve ALL “Primed” now and again.

Mildly unnerving masturbatory and Freudian jokes aside, what stands out the most during the three page lavender flashback at the beginning of Prime #3 are all the sound effects Strazewski and Jones slap on the page during the process (Kevin’s toilet even flushes with a “KER-SLUSHH”). This has to be some of the best goo inspired foley work ever presented in a comic (although, I’ve never done any research on this) and these alone may make this comic worth the two-bits!

The story in Prime #3 is a little weird, kind of engaging, and certainly action-packed. Apparently Prime has been captured by fertility doctor/geneticist who is responsible for Kevin’s ability to become Prime, which leads to all sorts of father/son relationship psycho-babble. This guy is trying to take samples of Kevin’s Prime flesh goo in order to create more of him (I guess??). Prime, of course, escapes his confinement, only to battle with his monstrous, misshapen “brother” (one of the Doctor’s earlier failed experiments who also beautifully and musically “SHRRIP” “BLURP” “PLAP” “FWAP” “SLLP”, “SPWP”, and “FWIP”’s his transformation). Prime defeats his “brother” with a neck snap and then seemingly destroys the “lab” in his confusion and rage fueled departure. 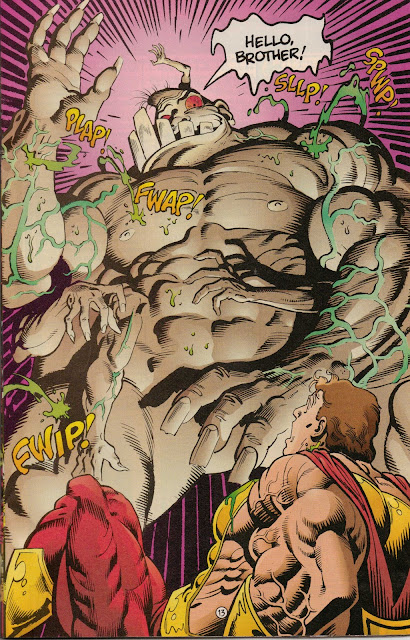 There are some interesting things going on here in Prime #3. The dynamics of the father/son relationship, the questions about Prime being a “Monster” or a hero, and the psychological trauma based denials that Kevin/Prime immaturely manifests in the face of the facts of his background elevate this comic a bit from just plain trash.

Norm Breyfogle’s art, while over the top (it was the 90’s after all), doesn’t necessarily detract from the experience, and his creative panel layout from page to page keeps the reader’s eyes moving and adds to the dynamism of the fight scenes. And there is something inherently interesting about the Prime character himself that kept me going as I read issue 3.

What detracted from my full engagement in the comic and probably explains why Prime #3 is now found in the two-bit bin, though, is how fucking annoying Prime is.

I mean, I get it – Prime is supposed to be a 13 year-old trapped in the body of an indestructible muscle-bound god, and he finds himself in situations that any 13 year-old would find a bit beyond their maturity level to really deal with well, but Prime, at least in issue #3, is so whiny and annoying that I, at least, really ended up hating his ass.

I mean, first he says things like “How about seeing some…PRIMAL RAGE!” and “you don’t know how fast I am – when I’m moving in PRIME TIME!” which just make me cringe and relegates the writing to the slop filled pig trough of WWF pre-match interviews. 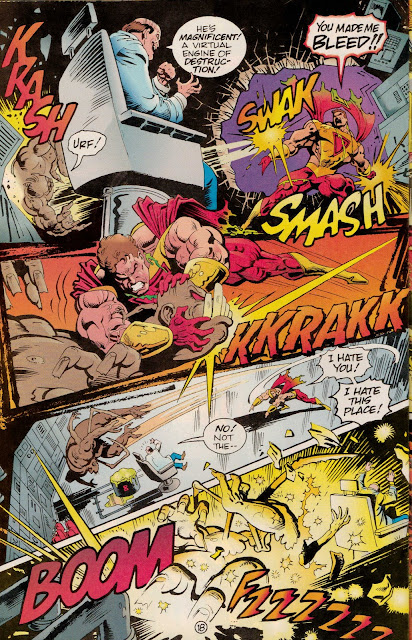 Then there is just this constant strained peas encrusted sputum spewing out of Prime’s mouth culminating in the Shakespearean pathos of utterances like “You tore my BODY!” and “You made me BLEED!” and “You MADE me do this! You and your LIES!” which all make me just want to curb stomp this sniveling bastard.

Even the villain in the story comments on how pathetic and whiny Prime is when he says, “You’re nothing but a clone … A big meat puppet… with a child inside!” I feel your pain, Doc, I really feel your pain.

All in all, though, Prime #3 is worth the fifty cents I paid out for it (although not much more), and the reading of it did have its moments of fun. I now have a new slew of goo inspired sound effects in my repertoire, and my son and I have a new inside joke based on the last page of Prime #3, where the badly burned Doctor says, “Get me to the VAT!” 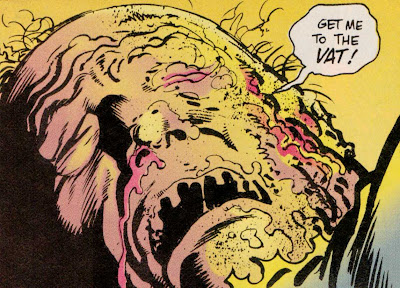 So thank you Malibu Comics, Ultraverse, Len Strazewski, Gerard Jones, Norm Breyfogle, and Prime. In this economy, finding any level of fun for fifty cents is PRIME (did I really just do that?)!