Poets You Should Know -- ALES DEBELJAK 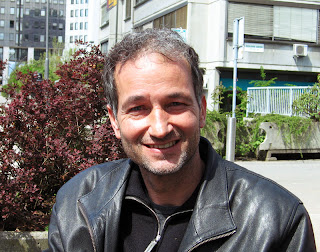 From Wikipedia:
Ales Debeljak was born in the Slovenian capital Ljubljana, then part of the Socialist Federal Republic of Yugoslavia. He graduated from comparative literature at the University of Ljubljana in 1985.  He continued his studies in the United States, obtaining a PhD in sociology of culture at Syracuse University in 1989.

He was later a Senior Fulbright fellow at the University of California, Berkeley. He also worked at the Institute for Advanced Studies Collegium Budapest, the Civitella Ranieri Center and the Bogliasco Liguria Study Center for the Arts and Humanitites.

Since the mid 1980s, Debeljak has taken an active part in civil society movements. He has been one of the co-editors of the critical alternative journal Nova revija. He has also participated in the social liberal think tank Forum 21, led by the former President of Slovenia Milan Kučan.

He is currently a professor of cultural studies at the Faculty for Social Studies of the University of Ljubljana.

In this moment ...
In this moment, in the twilight of a cold room, thunder approaches from a distance, through storm windows and dusty panes, in late afternoon, the water in the pot doesn't boil, when fish gasp under the ice, when half-asleep you tremble, as if without hope, when a pack--a herd of shivering stags left the dried marshes deep in the woods and came to the gardens in town, this fleeting instant, when the cold slices through your spine, when hardened honey cracks in jars, when the thought of a woman's hand--laid on the forehead of the dying--comes closer and closer, when from the depths of memory destroyed villages you wanted to forget begin to rise, when guilt and truth burn your stomach, when frightened pheasants are flushed from tapestries hanging on the wall, when guards leaving their posts whistle to one another, piercing the air, when a sharp stone breaks your skull, should I remind you now that your wounded body won't be any different than the shadow a solitary bush cast across the trampled earth, east of Eden?

-Translated from Slovenian by Christopher Merrill (with the author)