Watch This Movie - THIS SO-CALLED DISASTER 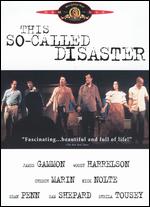 Today I found 2004's This So-Called Disaster by director Michael Almereyda.
This is a film about a playwright coming to terms with his story and actors struggling to be true to his vision. It is one of those behind-the-scenes documentaries that focuses more on process than story. In this film, Almereyda takes his viewers into the world of the great American playwright, Sam Shepard, as he runs his actors through the final three weeks of rehearsals before his play, The Late Henry Moss, opens at San Francisco's Magic Theater in late 2000.

His actors were no lightweights either. Shepard had cast Sean Penn, Nick Nolte, Woody Harrelson, Cheech Marin, and John Gammon in his play about estranged brothers coming to terms with the death of their alcoholic father. The story is dark, the characters are lost, and the play is hard. By combining the power of Shepard's writing with the chops of these award-winning actors, it transports this drama from the pathos of a made for TV movie to the stage of high art. 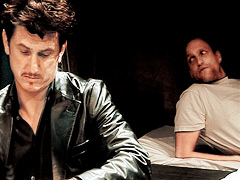 Still, this documentary is not really about the play, although Almereyda goes to great lengths to draw parallels between the subject of The Late Henry Moss and Shepard's own life (even including footage of Shepard's father who died in 1984). This is a documentary about process.

By watching this film, a viewer gains unprecedented access to how Sam Shepard approaches his writing. There's a moment in the film where Shepard is working with his actors on a particular scene and he senses it just isn't working because of the writing. “Let's get rid of this Joseph Conrad shit,” he says as he edits lines of dialogue. He is self-effacing, while at the same time honing his words to their sharpest point.

And Sam Shepard is a playwright with something to say.

The film is also about the process the actors go through. They try to come to terms with what Shepard is trying to say in the piece, which Sean Penn refers to as “the plight of being a man where being a man doesn't have any definition.” They are also trying to figure out how this story reverberates in their own lives so that they can more readily inhabit these characters.

I was fascinated with how Nolte and Penn went about constructing one of their more powerful scenes in the play. The process of how they went about drawing the necessary emotions needed for this moment in these characters' lives was fascinating to watch. Moments like these are peppered throughout this film and make the act of watching it revelatory.

Almereyda is the perfect documantarian for this film.. Never once does he intrude into the film. He lets his subjects tell their story on their own, and the film is all the more better for this decision.

By the time I finished watching This So-Called Disaster I was even more convinced that Sam Shepard is a man who is trying to tell our human story. I was also convinced that Sean Penn and Nick Nolte, regardless of what you may think of their personal lives or politics, are truly great actors.

This film documents American theater at its finest. It sheds light on the possibilities of art. It forces the viewer to think a little bit about the ties that hold us all together.

Listen to me. Grab your bag of Funyuns, crack open a Miller, and fire this one up tonight.