Review of YIDDISHKEIT: JEWISH VERNACULAR AND THE NEW LAND

THIS REVIEW ORIGINALLY RAN ON COMICS BULLETIN
I was raised by Jews. My grandparents were born in either Belarus or Poland and, as very small children, fled to America to either escape persecution or to try to make a better life for their families. They brought with them their religion, their culture, and Yiddish. As they assimilated, all of these things began to wane. My parents have only chunks, and I have even less. But I do have memories, especially of my grandparents speaking Yiddish when they didn't want me to know what they were talking about. 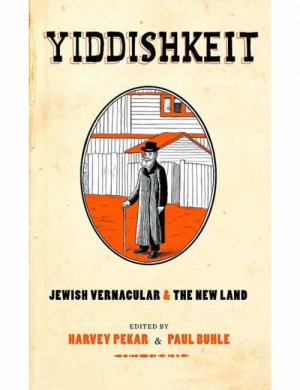 In his introduction to the comics anthology Yiddishkeit: Jewish Vernacular and The New Land edited by Harvey Pekar and Paul Buhle, noted author Neal Gabler says:


Yiddish may be the most onomatopoeic language ever created. Everything sounds exactly the way it should: macher for a self-appointed big shot, shlmiel for the fellow who spils the soup and shlmazel for the poor guy who gets the soup spilled on him, putz for an active louse, shmuck for a hapless one (as in "poor shmuck”), shnorer for a freeloader, nudnick for a pest. The expressiveness is bound into the language, and so is a kind of ruthless honesty. There is no decorousness in Yiddish, nor much romance. It is raw, egalitarian, vernacular.

Yiddish is a mutt. The language is an intermixture of German, Polish, and Hebrew that relies on grammatical rules of its own devising. The people who speak it are the Yiddishkeit ,and their language reflects much of their sensibility about life. There is sort of an optimistic fatalism to the Yiddishkeit. Things are the way they are. They may get better, but if not, you got what you got. Oy! “Hope for the best, expect the worst,” as Mel Brooks put it in his song The Twelve Chairs.

Harvey Pekar and Paul Buhle have put together this comics anthology to celebrate Yiddish and its contributions to literature and culture spanning from medieval Europe to the tenements of New York's Lower East Side.

The book begins with Pekar and artist Dan Archer giving a rather exhaustive history of Yiddish and its literary tradition, citing the works of all sorts of Yiddish poets, novelists, and playwrights. As in works such as American Splendor and Our Cancer Year, Pekar's writing is direct and full of his personal opinions. He has a special dislike for probably one of the best known Yiddish writers, Isaac Bashevis Singer, of whom he writes, “There are worse Jewish writers, but perhaps none so overrated. The fact that he won the Nobel Prize shows how little it's worth.” 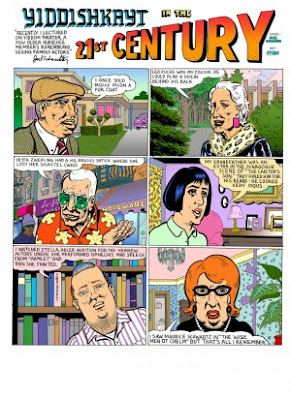 Pekar has done his research and he isn't concerned about the consequences of letting you know exactly how he feels about his subject matter. This makes for some of the best reading in the book.

Pekar's venom aside, the anthology does ultimately bog down, not only because of the breadth of it subject, but also because its organization seems to be a bit haphazard. In the middle of the anthology there are approximately forty pages devoted to “The Essence: A Yiddish Theater Dim Sum” written by Allen Lewis Rickman that features “The work of an awful lot of great Yiddish playwrights, lyricists, and composers.” While this extended piece certainly provides the reader with a sampling of Yiddish theater, it goes on just a little too long.

The anthology finishes with sort of a scatter shot approach, filling the remaining pages with the works of writers and artists such as Joel Schechter, Spain Rodriguez, Peter Kuper, Sharon Rudahl, Hershl Hartman, and Gary Dumm. The clash of styles and topics makes the book seem hurriedly put together.

And maybe it was. This was Pekar's last fully realized work before he died. This fact gives the publication of the anthology a layer of meaning it may not have had otherwise. Pekar begins the anthology with a prologue (illustrated by Sara Rosenbaum and David Lasky) in which he talks about Yiddish being his first language and how, after his grandfather died, he lost contact with the language. Somehow the publication of this book on Yiddish, Yiddish culture, and Yiddish literature completes the circle for Pekar.

To have the opportunity to hear Harvey Pekar's voice in comics one last time is more than enough reason to read Yiddishkeit: Jewish Vernacular and The New Land. To watch him as he struggles to understand his heritage at the end of his life is another. Learning about the rich contribution that Yiddish has played in the formation of American popular culture is another fascinating reason to read this anthology.

But ultimately, the most important reason to get this anthology is to learn the meaning of the phrase, “Gey kak in yam!”