Poets You Should Know -- PAUL LEGAULT 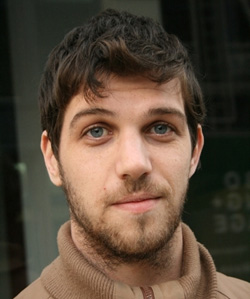 According to the October 15, 2011 Saturday Poetry Series from As It Ought To Be:

Paul Legault was born in Ontario and raised in Tennessee. He holds an M.F.A. in Creative Writing from the University of Virginia and a B.F.A. in Screenwriting from the University of Southern California. He is the author of two books of poetry, The Madeleine Poems (Omnidawn, 2010, winner of the 2009 Omnidawn First/Second Book Award) and The Other Poems which is forthcoming from Fence Books in 2011. He co-founded and co-edits the translation press Telephone Books.

I'm reposting the same poem that ran on As It Ought To Be (because it is excellent) after the jump.  I hope neither they nor Mr. Legault has a problem with that....

At least
you can sleep by
the American names for loneliness:
Iowa, Nebraska, Memphis, like snow
that we had to talk about
when it refused to go away.
Give it names,
names for names’ sake:
ashes, the winter, the white earth.

into spring, even now.
The land exists. Ruin.
Snow. He will stay.
The patterns of milk, of place

like a fluid, snowmen that know nothing
of competition, of men made
of red and not water,
of blood that keeps through summer.

You may as well make him a home by now
from snow and a wife
of sorts from snow and a mouth,
because they will make a name for themselves
from snow and the means to wait
from ice, from carrots and coal,
their wide language derived from the weather
without a single word for you,
ten for the sea,
nothing for the cold.