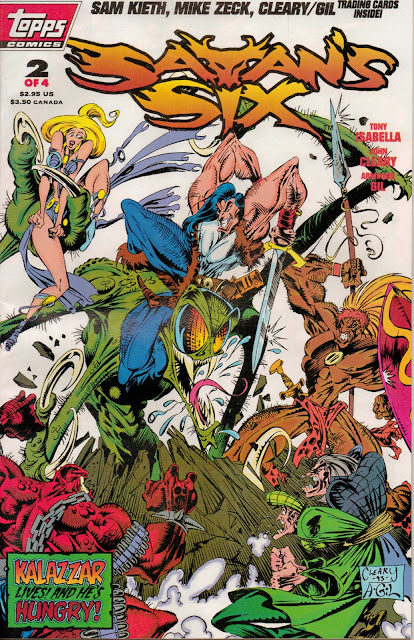 TEETH!
May of 1993 could well have been one of the most uneventful moments in history. As far as I can tell, the only event of significance was that Eritrea and Monaco gained entry into the United Nations, and who the hell has ever heard of Eritrea?

Sure, PJ Harvey released Rid of Me, but this was also when movies like Hot Shots! Part Deux and Super Mario Brothers opened in movie theaters.

Nobody really all that notable died, except for the show Quantum Leap, and everyone was so bored in May of 1993 that 80 MILLION of us tuned in to watch the series finale of Cheers.

Into this vacuum of excitement, Topps Comics snuck onto the shelves a little gem called Satan's Six #2.

From what I understand, Satan's Six was a Jack Kirby creation. According to the Jack Kirby Weblog, in issue number one of this series, “There's an 8 page Kirby story not-quite-seamlessly mixed in among the other pages. Single pages were inked by Steve Ditko, Joe Sinnott, Terry Austin and Frank Miller, while Mike Royer inked the remainder. There's also a centerfold by Kirby of the main characters.” Kirby created these characters, he wrote the first story, and provided the art for it as well. 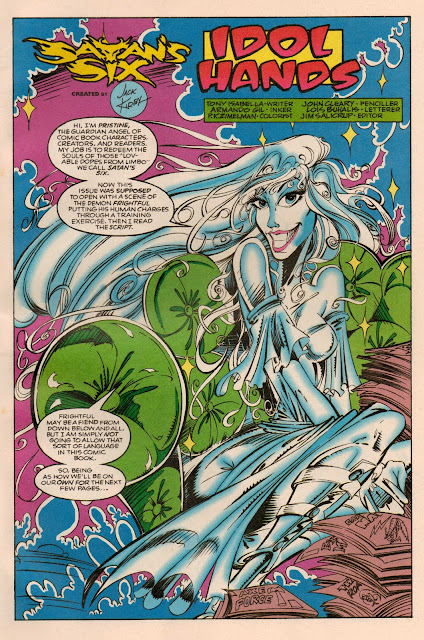 As you can see, all traces of “The King” are gone.

What we are left with is teeth. A lot of teeth. Artist John Cleary likes teeth. You will be seeing a lot of teeth in this comic. A lot.

But kudos have to go to stalwart comic book legend Tony Isabella for putting a sweet Maraschino Cherry on this shit sundae. Were it not for Tony's writing, I would have fed this comic to my dear dog, Edgar.

I wouldn't do that to Edgar. I love Edgar.

What I would have done was shove this comic in the tailpipe of my neighbor's 3:00 AM endlessly revving Harley. Then, at least, its existence would have served some sort of purpose.

I mean, just look at that splash page above. What the hell is going on there? It's hideous. And those teeth – those huge, clenched, smiling teeth!

Thankfully, Tony Isabella's writing distracts your attention. He's pulling some sort of meta-fiction, Jedi mind trick drawing attention to the fact that this is NOT the Satan's Six you were looking for. Pristine here is the “Guardian Angel of Comic Book Characters, Creators, and Readers.” She is also our entry into this mess, and she's all apologies.

On the next page, Pristine gives the reader some salve for their initial shock. 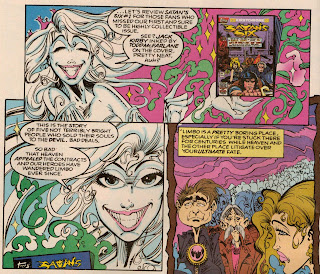 This is kind of a bold move, to show Kirby's artwork next to Cleary's. Was this Isabella's choice? If so, well played, Tony. The juxtaposition is shocking and really highlights the teeth.

Have I mentioned the teeth?

Anyway, Isabella, through Pristine, gives the reader the back story. Five people sold their sold their souls to the Devil and ended up in Limbo. They hated Limbo, so they made another deal with Devil to get out of it; if they recruit other souls for the Devil, they can get their lives back. These five fools are Brian Bluedragon from King Arthur's Court, Kuga the Warrior, Dezira the Temple Dancer, Doctor Mordius who is just mysterious, and Hard Luck Harrigan from Chicago.

After some more teeth, a lot more teeth, the comic cuts to a Museum where there are huge guards with big teeth wandering around making burrito jokes. For some reason, Satan's Six are there. There is a scuffle. Lots of teeth are barred. There's a dog. 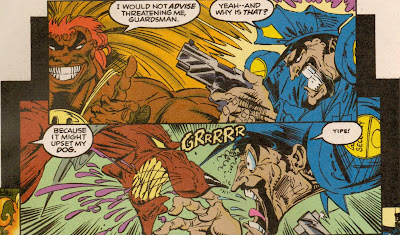 The dog has teeth.

The guards are subdued. There's this guy with a beard and glasses (and teeth). Pristine shows up again to explain what is happening (thank you again, Tony Isabella).

Apparently the bearded guy is Professor Jacob Simon who discovered the Temple of Kalazzar. He discovered a statue that indicated the existence of “a lost race that had worshiped a mysterious being know as … KALAZZAR!” Nobody believed him, though, and he was ruined. The statue he found was added to the Museum's “Just-Opened Exhibit of Famous Frauds.” This statue, though, is also a portal which Kalazzar can enter this realm, and he is nasty (just like Janet Jackson). In order to save humanity from a fate most horrible, Professor Simon sells his soul. And thus Satan's Six involvement. Or something.

Professor Simon has an incantation to get Kalazzar under control. It requires, I think, a lot of teeth. But there is some double-crossing on behalf of the Devil and then, with my favorite comic book sound effect ever, “KRAKADOOM, Kalazzar shows up totally out of control. 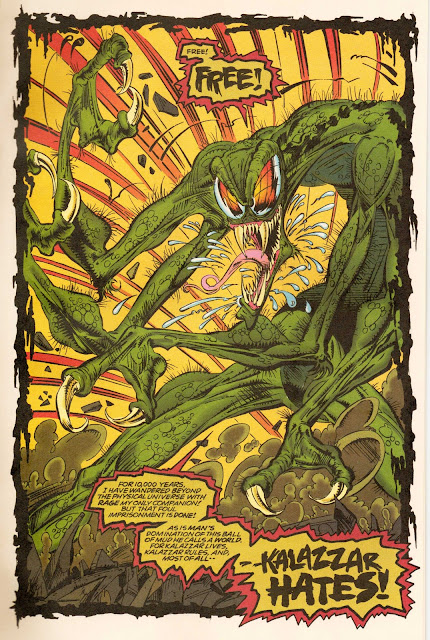 Look at his teeth.

A battle ensues. Teeth are barred, muscles are flexed, there's a dog, Isabella writes some pretty funny one-liners, and it all looks hopeless for Satan's Six. Kalazzar is going to enslave and then kill all of mankind.

Suddenly, Professor Simon realizes that Kalazzar is just a giant bug and, with this insight, he figures out how to defeat the demon. He just needs to keep Kalazzar occupied while he runs off to the Super K-Mart down the street (seriously). Dezira the Temple Dancer knows about keeping people occupied

Isabella provides a pretty funny sword straightening joke, but things only get worse.

The Professor returns with all sorts of bug spray. They are not sure how to use all the cans at once though. Luckily Doctor Mordius, the mysterious one, knows just what to do. 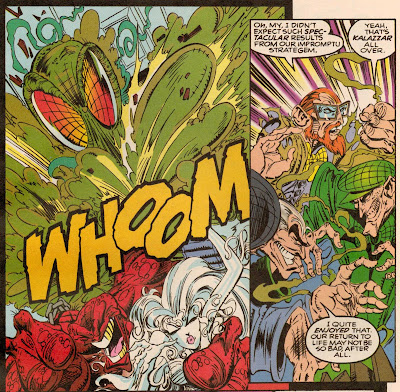 The comic ends with this page: 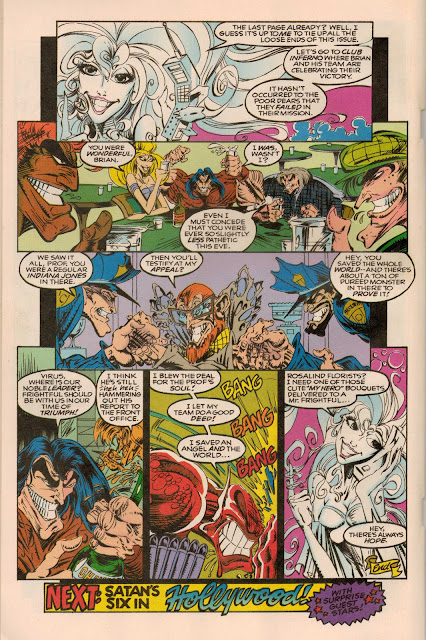 With this sort of ending, I sort of have the sense that Tony Isabella felt that there wasn't going to be too long of a drive on the Satan's Six highway. He must have seen some of Cleary's pages before he finished the script. Poor Tony. I don't blame him for this mess. He tried. He made me laugh. He wanted it to work.

I blame Topps Comics for this. I especially blame Jim Salicrup who was the Editor-in-Chief. Why would they let this happen? How could they feel good about publishing this comic? It's like they gleefully spit in the face of Jack Kirby by letting John Cleary do the art on this. Hadn't Kirby been spit on enough by the comics industry?

I imagine Tony Isabella talked with Jack about the direction he wanted to go with this title. I wonder how many times he apologized to him after it came out.

Satan's Six only lasted four issues in total. That was probably three issues too many.

It was something nobody could really sink their teeth into.

Do you know how hard it is to come up with original teeth jokes? I've been sitting here for hours working on this.

Anyway, I still respect Tony Isabella for gutting this one out. I hope nobody ever uses this comic as a gauge of his talents, because even for fifty cents I paid to damn much for this.