Random Pulls from the Bargain Bin
In these economic times, finding inexpensive entertainment is difficult. Thank goodness for the local comic shop and a slew of comics nobody cares about anymore! Each week Daniel Elkin randomly grabs a comic from the bargain bin (for 50 cents) to see what kind of bang he can get for his two-bits. These are those tales. 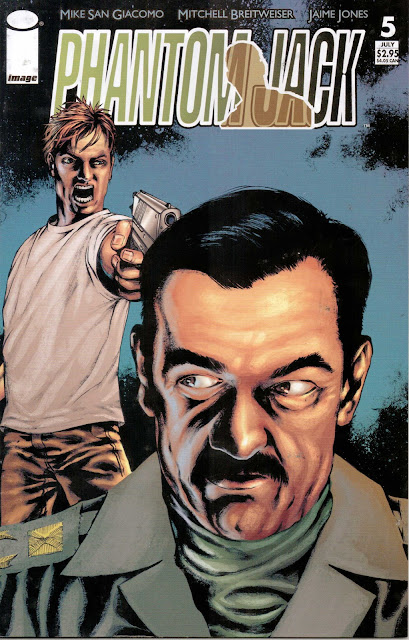 AND TRUTH IS THE GOD WE WORSHIP.
The final report of the United States Intelligence Committee stated that regardless of the CIA's assertions to the contrary, claims about the presence of weapons of mass destruction in the build up to the Iraq War were unsupported by available intelligence. The Butler Review into England’s intelligence on Iraq’s weapons of mass destruction said that UK sources used unreliable information and were seriously flawed. Both of these reports were published in July, 2004. This was the same month that 60 Americans died in the conflict in Iraq.

It was in July, 2004 that the UN revealed that in parts of Africa life expectancy had dropped below 33 years due to AIDS.

That summer Marlon Brando died, Jimmy Buffett released his album License to Chill, and Harold and Kumar Go to White Castle opened in the movie theaters.

Into this miasma of suckage that was July, 2004, Image Comics dropped a comic called Phantom Jack #5. Seven years later, I was unlucky enough to randomly pull this dreck out of the bargain bin.

And thus was born this week’s Cheap Thrills.

Phantom Jack #5 starts off, thankfully, with a little background information on the inside of the front cover. The story so far has revolved around a New York City newspaper reporter named Jack Baxter who can become invisible at will (I shit you not). Jack’s younger brother, Cassidy, has been taken prisoner in Baghdad in March, 2003 before the start of the war to "liberate Iraq." Jack goes all invisible rescue mission and meets a lady named Madison Blue, who also can turn invisible.

What are the chances of that?

Right before issue #5 begins, Jack and Madison have rescued Cassidy by "taping the three of them together in a sort of invisible sandwich," or at least that's how the writer describes it.

You’ll see what this means.

On their way out of the palace in Baghdad, they run into Saddam Hussein. 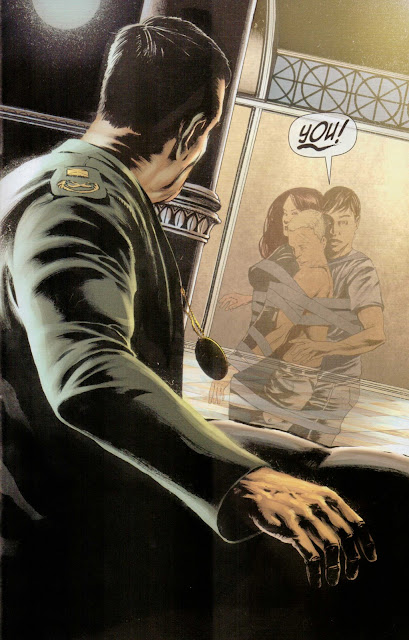 Apparently, according to the logic of this comic, invisibility can be transferred through osmosis. How this whole invisible sandwich thing works is beyond me, but it is stupid enough to set my teeth grinding.

Saddam can’t see the sandwich because it is invisible, but if he could… mmmm… sandwich of infidels… 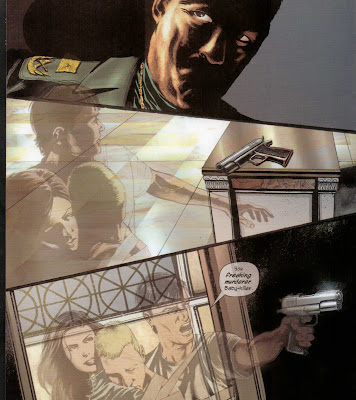 Luckily for the sandwich, Saddam is a pretty messy guy, leaving handguns around all over the place. Jack, in what is most assuredly a fit of pique, picks up the gun and points it at Saddam. 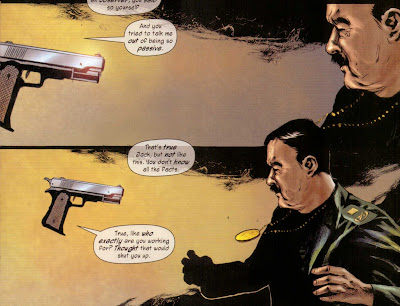 I gather it is a special Iraqi magnet gun for it seems to attract Saddam’s medal (which he won the previous year for Best Mustache on a Dictator). This medal, by the way, seems to come and go around Saddam’s neck, sometimes it is there very prominently, other times it is not there at all. It's like an artistic afterthought and is indicative of the entire half-assed feel of the whole book.

Then again, maybe it is a cool manifestation of Saddam’s Super-Dictator powers.

Either way, it certainly can easily be mistaken as a weapon of mass destruction and is absolutely a cause for imminent invasion.

So Jack’s got the gun. He’s pointing it at Saddam. Even though Madison reminds him that as a reporter, he’s only an "observer" not a participant, Jack can’t help but 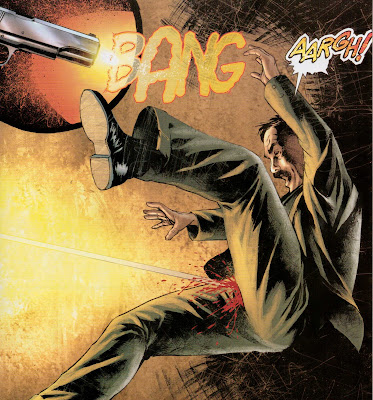 The sandwich makes its way out of the palace invisibly and escapes into the streets of Baghdad. Then we get the inevitable joke: 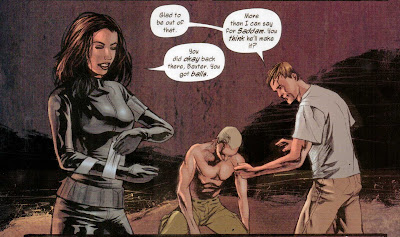 Next, there’s this whole bit about Jack, Madison, and Cassidy getting out of Baghdad by borrowing a cab from a sympathetic Iraqi (Yeah, they had those once. Remember this comic is taking place prior to the occupation). Then there are two full pages of them driving through the desert listening to Simon and Garfunkel’s America on the radio (Iraqi radio?). You know the song. It goes like this:

Let me just repeat what I said above. There are TWO FULL PAGES of them driving through the Iraqi desert in a taxi listening to America on the radio. In Iraq. With the lyrics ensconced within little white music notes. Two pages.

I think this is supposed to make me feel patriotic.

Madison and Jack part in the desert. They kiss passionately and she disappears – literally – she turns invisible.

At this point I am so sick of this comic I hope there is some ill-fated invasion coming up just to distract me.

Two days later, according to the comic, we are in Atlanta. Cassidy is in a hospital bed with no recollection of how he ended up there. Jack makes up a story which casts Cassidy in the role of the heroic solider, fighting his way out of an Iraqi prison.

Personally, I was a little incensed by this. I mean, could you imagine someone lying about the actions of an American soldier in order to try to portray him or her as a hero in order to help rally public support around a war that was beginning to bog down and whose moral legitimacy was beginning to be called into question? That would be a horrible thing to do, wouldn’t it?

Saddam’s magical dictator medal makes another appearance as Jack gives it to Cassidy for being a "hero".

One week later we are at "The Clarion" which I guess is the newspaper Jack works for. All the reporters want to go get some drinks because they "deserve it." 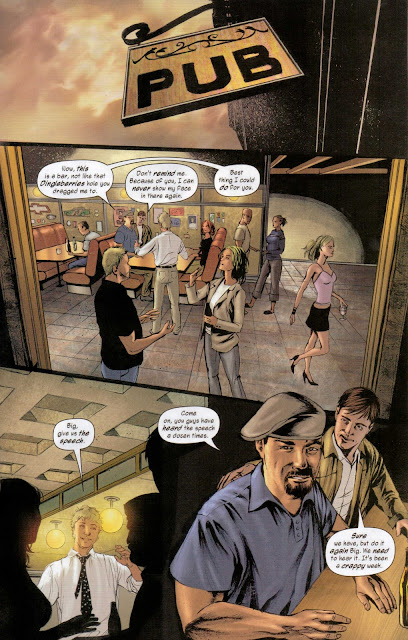 At "Pub", everyone wants this guy, a 25 year veteran reporter named "Big", to give "the speech."

So "Big" grabs a beer and begins to hold forth delivering the Speech. He begins by asking questions about why, as journalists, they put up with crap from their editors, lies from politicians, and a disinterested readership who "really only care about Oprah’s diet tips."

Then he goes on: 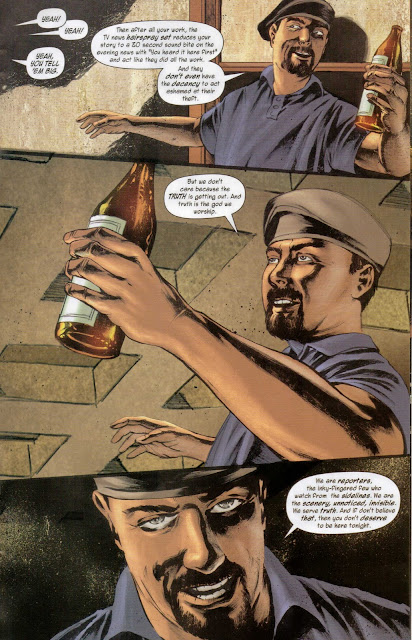 That’s right, "truth is the god we worship." They are reporters and they serve the truth! 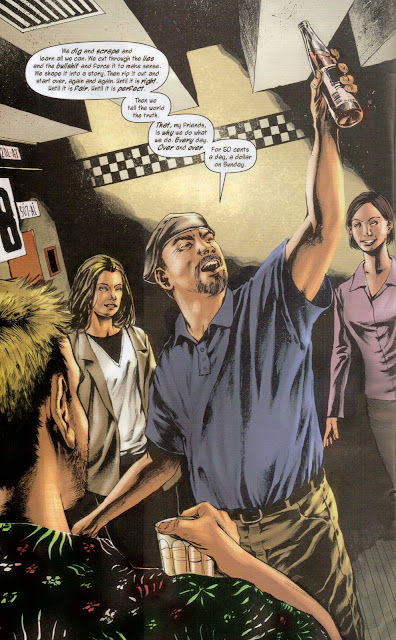 That’s right! Reporters tell the world the truth! That’s why they put up with all that they do. That’s why they are beaten down and slave over their stories and wear their fingers to the bone. For The TRUTH!

Take, for example, the work of reporters covering the events leading up to the invasion of Iraq, the period in which this comic's narrative takes place. Journalists certainly went above and beyond during that pivotal moment, burning the midnight oil, making enemies of important people, fighting back against the system – all in the name of TRUTH!

The hard hitting questions, the deep investigative work, the hours pouring over documents – American journalism showed itself to truly be an important part of the very underpinnings of our democracy. Thank God for the intrepid reporters on the national stage who, at great personal risk, were able to get to the very TRUTH of the what was happening before we recklessly threw our brave men and women in uniform into the lion’s mouth of war where they would be ripped apart senselessly and brutally. Thank God our journalists stuck their necks out to see behind the lies of the politicians and corporate interests who, drooling for more dollars in their coffers, might manufacture evidence to goad us into war.

"Truth is the god we worship." Praise all that is holy that this was the reality and our press corps opened our eyes to the reality of the situation.

The comic ends with this: 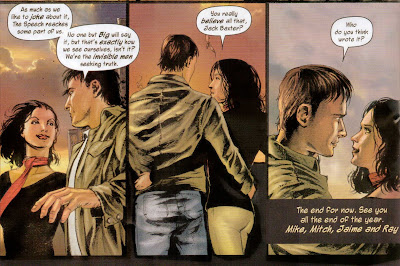 I have no idea who this woman is in Jack’s arms. I know it is not Madison, whom he was kissing earlier in the book. I’m sure that whoever she is, she is very understanding because obviously Jack told her about Madison. He serves the truth, after all.

You know what? Fuck this comic that Mike San Giacomo wrote and Image Comics for put out. If you ask me, this piece of drek is the most duplicitous damp vomit I’ve read since… since… well, since I read the reporting leading up to the invasion of Iraq.

Let's be honest here. The "Fourth Estate" seriously failed during that time, and, by failing, cheapened our democracy all the more. To have a comic celebrating reporting during that period is like reading a poem celebrating the football acumen of the 2003 Cleveland Browns.

The TRUTH was buried, and nobody brought a shovel.

Seven years later, I paid fifty cents for this comic.