The Man Who Sold The Blackstar: Trying To Come To Terms With CASANOVA: ACEDIA #5 And The Loss Of David Bowie (And Probably Failing At Both) 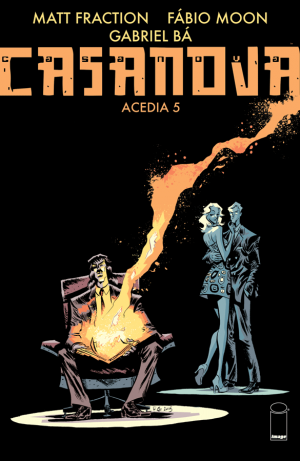 Something happened on the day he died
Spirit rose a metre then stepped aside
Somebody else took his place, and bravely cried
(I'm a blackstar, I'm a blackstar)
-- David Bowie “Blackstar”

“Surely this was the man who would burn the world.”
-- Matt Fraction Casanova: Acedia #5

I’ve been kinda dreading this moment since January 10, 2016.

Normally, upon the release of a new issue of Matt Fraction and Fábio Moon’s Casanova: Acedia, I would be all up in the clouds spit-screaming hallelujah and getting dog dirty rolling around on the carpet in glee. But the world has changed in the last six months and I’ve become a much more broken man in the interim.

The reason this is important to my unpacking of Casanova: Acedia #5 is that, from the beginning, way back on January 27, 2015 when Keith Silva, Jason Sacks, and I reviewed issue #1, I’ve been comparing this arc of Fraction’s psychedelic, dimension-hopping, bonkers super-spy romp to the permutations and performance and poetry of David Bowie.

In that first review I compared this version of Casanova Quinn to the sturm und drang of the Ziggy Stardust persona and suffused my review with lyrics from that album. Subsequently, in ensuing reviews, I started pulling songs and ideas from Low, then Diamond Dogs, then Aladdin Sane. For issue #5 I had every reason to plan and expect to work in Scary Monsters and Super Creeps, but in the ten months between the publication of issue #4 and issue #5, the unexpected happened and all plans and understandings were heaped into the tire fire that we know to be life.

And I still haven’t come to terms with that yet.

As you know, right before he did, Bowie left us Blackstar which is eulogy and celebration, beautiful and dangerous, obtuse and open. A parting gift of an artist in command of his craft.

Somehow it is the perfect backdrop admixture soundtrack for reading and writing about Casanova: Acedia #5.

Because I want it to be.

Because I need it to be.

As Bowie sang in “I Can’t Give Everything Away”, “Seeing more and feeling less, saying no but meaning yes,” Casanova: Acedia #5 has the buttons sewn on the cloth blindfold pop off in whatever metaphor I am trying to cobble together (vainly, perhaps, but I persist), allowing us, the reader, to witness Quinn see through the veil and finally confront not only who his employer actually is, but also to begin to understand his own role in this puzzle. 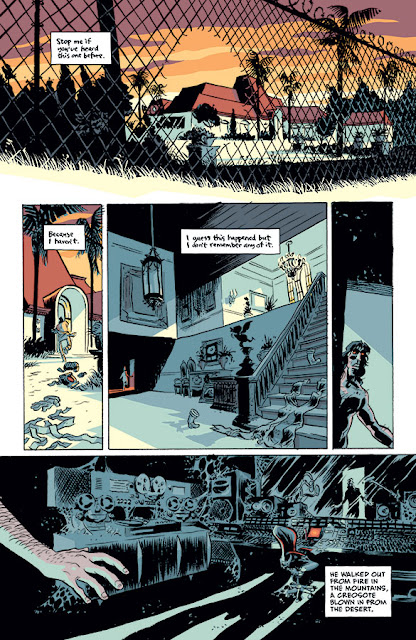 But as with all things Casanova, there are dimensions to understand between. And everything is part of a larger story that consists in all the timelines. You can’t piece together interdimensional storytelling without a couple of drinks first.

Decisions have to be made one way or the other, either in the heat of the “fwoo and kssss” monster moment or after a careful reading sit down contemplation (only later to set the file aflame). All quests to understand what has begun now seem much more imminent. Each demon gets stronger as new information is signified. That was patrol. This is the war.  We are to “assume he’s been playing you all along. Assume he knows everything you do.” 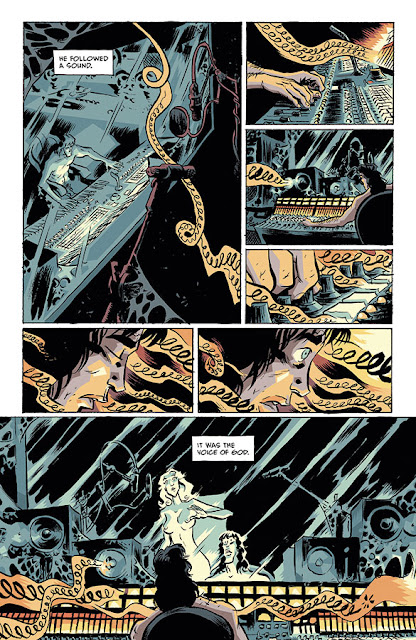 In the hallways by the lockers I’ve overheard you guys say, “Shit’s getting real.”

Fraction understands that as this random “shit” becomes what we mistake for “reality”, it’s gotta get weird. Bonkers. Off the rails and into cobwebbed recording studios and endless hospital rooms.

But the train that is Casanova constantly holds together. While Fraction may be putting the loco in this locomotive, the real engineer continues to be Fábio Moon. At the center of it all, at the center of it all. Art and colors. Dynamic. Fluid. Beat for beat. Beautiful.

There’s a moment, one of Moon’s panels, looking down into an infinite downstairs bookstore (AN INFINITE BOOKSTORE!) that is so put aside your M.C. Escher four point perspective dizzying to the point of mouth open drooling that you have to echo Ruby’s “Holy Shit” because it’s encapsulating and on target. Which is to say another perfect Casanova moment. Moon is sitting in the chestnut tree. Who the fuck’s gonna mess with him?

Sorry. These songs continue to gain weight with each listen.

It’s easier to keep talking about this book than it is to think about Bowie.

I can’t give everything away.

Yet this writing is therapy, and this is going to continue to be an uphill march.

So. Casanova: Acedia #5 opens up the next stage of this arc. As backup in the first five issues, Michael Chabon and Gabriel Bá have been winding some weirdness of their own with the omnidirectional story of “The Metanauts”. I don’t have the stamina to even begin parsing what has been going on there -- in a season of crime, none need atone, but it seems that the two story lines are headed for a collision shortly. 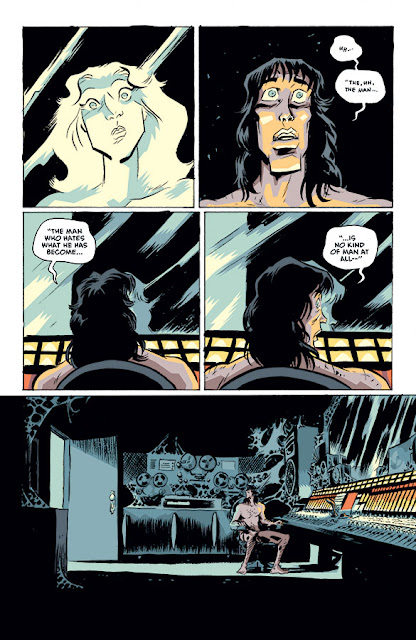 Though this could be wishful thinking on my part.

To think that Casanova has been going now for a full ten years only seems to make sense given all we’ve been through together, We’ve lost as much as we’ve found and it all points to the fact that no matter what songs we’ve listened to or sung along with or wish we had written, none of it makes apparent sense. Yet we get to be where we are. I’ve got scars that can’t be seen. I’ve got drama, can’t be stolen.

Is Casanova: Acedia #5 a solitary candle in the center of it all? Does it lie instead of talking tall? Eagles in my daydreams? Diamonds in my eyes? Pop star? Flam star? Black star? Your passport and shoes and your sedatives, boo?

I don’t know and I can’t imagine that you’re looking to me for answers. What Fraction and Moon are doing here is enough. It distracts and confounds and entertains. It’s wonderful and weird and well-formed. Last year I called this series one of my favorite books. It’s going to help me process what is gone as much as what it is.

This way or no way
You know, I’ll be free
Just like that bluebird