This Review Originally Ran on Comics Bulletin.
Ardden Entertainment will be releasing Mixtape #2 by Brad Abraham and Jok. Our middle-aged Wonder Boys, Jason Sacks and Daniel Elkin, cue up the album, dust off their VHS, and fire up their memories of the late 1980s and delve into this retro, music-filled, black and white, small press release. 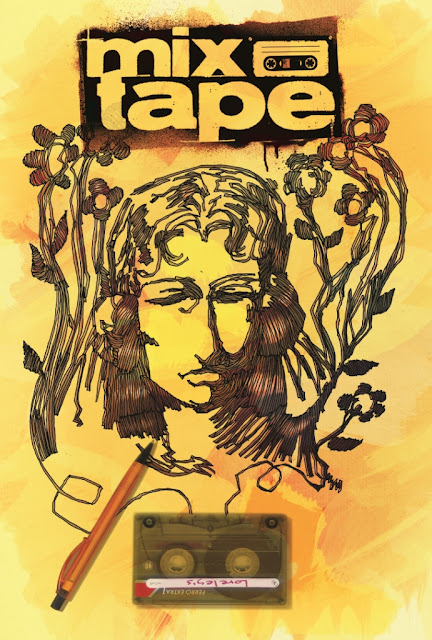 Jason Sacks: So we're both old enough to remember when it was tough to be the kid who's into the cool music. It was hard to keep up with everything, and, if you were the trendsetter, you were one of the coolest kids in school. In Mixtape #2 Lorelei Cross has that moment of cool -- for a tantalizingly brief moment.
Daniel Elkin: Indeed she does. In this issue, Lorelei's less than cushy internship at WRVR 103 (The Sound of the Coast) -- a station which, when we first hear it in the book, is playing Bel Biv Devoe for god's sake -- turns into a goldmine of opportunity due to access to the best music ever recorded ever by anybody -- and you can't tell me any differently!
Jason: I love how Lorelei finds a secret cave full of great music at the station, and it's like an archeologist opening King Tut's tomb in a way... she finds all kinds of treasures.
Daniel: And they are those special treasures, too, the ones that, once unearthed, make you king even if it's only for a little while, because once you got them, everyone who doesn't, they want you to give them a taste.
Unless they don't. And if they don't, then they are just a bunch of Bel Biv Devoetees anyway and are obviously just lesser folk. As Lorelei says, "Do I want the Debbies and Tiffanys at school to be into the Replacements?"
Jason: Ha, hell no!

These are the real treasures, the music that hits you at the right point in your life, enriches your life, makes it more complete, confirms who you are and who you want to be, and makes you think about love and sex and freedom and life and everything else mysterious about adulthood that builds to a yearning to grow up and live in the adult world.
I love that she actually moans when she finds a copy of the Pogues' Rum, Sodomy and the Lash!
And the Replacements are like a soundtrack for that era in your life -- this loose, intense, awesomely powerful freedom that comes through in their songs is ephemeral and troubled, but when you're 17, it's the sound of a world that you have -- just HAVE -- to live in.

Daniel: AMEN, Brother Sacks. And it's not just the Replacements or the Pogues, either in this book. It's The Clash and Billy Bragg and Nick Cave and X and even Jesus and the Mary Chain.
Oh, Jesus and the Mary Chain.
Do you know how awesome it was to see Lorelei holding Automatic? The noise. Oh man. How I love that noise.
Jason: Oh yeah, that first Jesus and Mary Chain album was so phenomenal with thee incredible feedback based music -- you had to wade through the feedback with a machete just to get to the rhythm on some of those songs.
That was powerful, powerful stuff.
You know, Elkin, I talk about this with my older daughter sometimes -- there was a feeling in the late '80s that music and comics were changing in amazing, radical ways that we had never seen before. Our generation was taking over the world!
And then came Nirvana and for a while we actually did take over the music world.
Daniel: Oh yeah, we took over and we ruled, huh? Until, of course, it all went to shit again. As it always does when "the focus groups and research" take over and start co-opting and scheming and using and draining until there is nothing left but a shotgun on a cold April 5th in Seattle.
But we're talking about a comic, right, not about music?
Jason: But Mixtape #2 is all about music.
Daniel: It's hard to separate them, then.
Given that,  I have two questions :  One,  if you don't know the music can you still like Mixtape #2 as much, and, Two, how does this issue relate to issue #1 that we talked about I don't even know how long ago
Jason: The comics are a tapestry, right? They provide a shifting look at different kids at a high school and the story of how music affects and changes each of them.
Daniel: Is it a universal teen thing, then, the music? I mean, I KNOW our music was the best ever ever (nobody can tell me differently) ever, never to be repeated, but is Lorelei's story universal (at least in America)? She says, "Do you know how it feels to finally be the person with all the music you and anyone else ever wanted?" Is that it? The coolness. The one everyone looks to. The arbiter of taste? Is that who we all wanted to be when we were youth?
Jason: Well, of course. We wanted to be cool. But we wanted to be cool on our terms: sorta smart, sorta geeky, always embracing the things that we loved and knew were special and that other people would love if only they actually got to experience it too. We wanted to be the arbiters of taste, hell yeah.
I mean, look what we grew up to be doing -- trying to be taste setters!

Daniel: That's because we are cool and we know best.
I will put The Replacements' Answering Machine against whatever creature it is that they created to sing "Call Me Maybe" any day and I will always end up ruling the world.
But, again, Mixtape #2 is also a comic, and we should address its comicness as well, don't you think?
Jason: Well, I think we're talking about some of it -- the painfully authentic way that this comic shows that youthful striving and the sincere way that a simple achievement can change a life in minor but incredibly important ways.
Look at Lorelei's face and you can see the young Sacks and the young Elkin and the young faces of all our respective friends from those years, all striving to move beyond our prosaic and circumscribed teen lives to find something great and exciting and involving.
But yeah, I guess I see what you meant earlier. I wonder, is the comic doing the heavy lifting here or am I doing most of the work?
Daniel: That's my question. Sure, it's easy to drive this story when you fill it with your own gas, but would one of the Debbies or Tiffanys relate to Mixtape #2 in the same manner? Does it cross culture (as it were)?
I think it might. I think it may be just one of those stories that we all relate to. Some of us more than others, because the story told here is our story. OURS. It even name checks Lou Reed for Christ's sake!
Abraham and Jok have pulled off another winner, as far as I am concerned.
Jason: The storytelling is really effective in this comic -- for instance, look at Page 6 and how Lorelei is framed in that panel -- alone and shoved to the corner of that large panel, but at the same time she seems surrounded, safe, happy -- and the stereo is the focus of the scene, full of real power.
Or Page 13 -- all the small insets of people asking for music floating above Lorelei's head as she looks blissfully happy. It doesn't matter if they're talking cheerleading, the swim team, Beanie Babies or music, that feeling of being accepted and cool is incredibly powerful and we can see that on her face.

Daniel: I agree. This is a pretty nicely put together package. There is that question in the book also, "But if they don't hear it, how can they like it?" I guess we can draw parallels between the music that the book is full of and this little book from Ardden itself
By writing this review, are we making a mixtape? Are we the arbiters of cool?
Jason: Of course we are. We are our own arbiters of cool.
I'm not sure if you've had these conversations with your 15-year-old, but my 19-year-old and I often talk about aesthetics and the difference between the good and the great; criteria for judging what makes music great and what makes art transcendent.
And the best thing about being our age and having thought about those issues since we were Lorelei's age (and we basically were Lorelei's age in 1990) is that we've come to coherent opinions on those issues.
So, hell yeah, we are the tastemakers. Whether anyone listens to us is a whole different story.
Daniel: Well then, I want to tell everyone to listen to this:

Jason: Niiice. What about this:

Daniel: OOOOOOOOH my goodness -- that is FUCKING AWESOME!
Jason: They're so young and the music is so hot!
Daniel: I wonder where this series is going to go. I know Abraham is going to release #3 with some more issues planned. I, for one, can't wait. It's brought back so much music and so many memories.
Jason: I know. One of the great thrills of going to college was being able to go back into the vaults of KLC, our college radio station, and discover so much great music. It was an almost constant feeling of euphoria. So I know exactly how Lorelei felt. For that brief moment, I was incredibly musically hip.

Daniel: Come on, Sacks. You're still hip. We're still hip. DAMNIT, I'M TELLING YOU THAT WE'RE STILL HIP!
Ahem…
So, Mixtape #2, yay or nay?
Jason: Yay on the merits and a big yea because hell yeah I was Lorelei and I knew exactly how she felt.
Daniel: And a super massively enormous YAY for all the music. Oh man, the music.
Jason: Man, now I'm surfing YouTube.
Daniel: This has happened to us before, hasn't it, Sacks?
Jason: Ha, yeah, man, we're too damn compatible sometimes with our taste….
Daniel: I'll meet you left of the dial.