This Review Originally Ran on Comics Bulletin
Some comics are too big, hypeworthy or insane for one reviewer to cover. Which is why we have Real Talk, an outlet for a group of reviewers to tackle a comic together and either come to a consensus or verbally arm wrestle until there's nothing left to say. 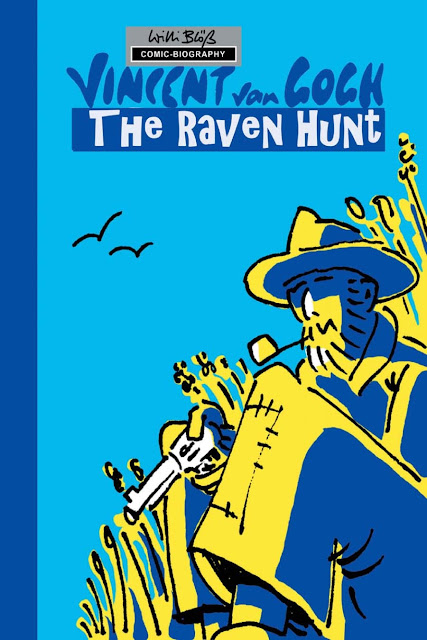 Fresh on the stands of your more adventurous comic shops or the digital newsstand of your favorite ebook retailer comes Bluewater Production's new Milestones of Art series. These new short biographical graphic novels present the life stories of six of the nineteenth and twentieth century's finest artists, including Andy Warhol, Vincent Van Gogh, Salvador Dali, Keith Haring, Pablo Picasso and Frida Kahlo.
Daniel Elkin, Shawn Hill and Jason Sacks, all fans of great art, decided to sample a few of these books and see if they were worth tributes to the artists that they discuss.


Shawn Hill: I had a hard time picking where to start. All six of those artists have two things in common: they were integral contributors to their eras, and they remain popular and hip touchstones today. At a quick glance, the Warhol takes a kind of R. Crumb/Mad Magazine approach to his unlikely life, celebrating each of his foibles and peculiarities as integral factors in his pervasive creativity. The writer/artist is obviously working from a place of deep fascination. In contrast, the style of the Keith Haring bio is more simplified, reduced to big bold 1980's colors and solid outlines. While obviously taking its cue from Haring's art itself, the artist paraphrases it more than completely quoting Haring's figures and motifs. Perhaps as a result, the story seems somewhat disjointed and abrupt. Similarly, there is a lot of biography to pack into Frida Kahlo's tragic and eventful life.

Jason Sacks: Right, and the Frida Kahlo book celebrates the artist's ups and downs in her career with the clever use of bright colors and sometimes abstract images. The style gives the book a kind of loose, humorous feel that works well as a contrast to the real drama in her life. All the books feel different from each other, but they're all of a similar type as well.
I liked that each of these books takes its own approach to the artists they depict. While all six of these people are beloved and acclaimed, mythologized and studied as masters of their art, they were also humans. Willi Bloess takes great pains to tell the full stories of the lives of these men and women, complete with affairs and heartbreak, poverty and occasionally triumph.
One thing that really mars these books is the sub-par translations. It's really frustrating to read a book like the Frida Kahlo book and find text like "Frida Khalo declared declares 1910 to be the year of her birth so that she could can call herself 'the daughter of the Mexican revolution.'" This text is on page one, probably the most important page of any book, and it sets a bad tone for this book. Unfortunately all six of the books are marred by unfortunate translations and strange linguistic flourishes that read like a straight Google Translation of the text of the comic.

That really is a shame because on the whole I really liked the energy and vitality of these little books. There's a fun sort of "warts and all" feel to these books as they dig deep into the often crazy and fractured lives of their artists. The book about Salvador Dali isn't afraid to talk about the way that he often would frustrate those who want to love him. The book about Andy Warhol talks directly about Warhol's controversial practice of having other artists do work for him and sign his name to it. And the book about Vincent Van Gogh almost reads like an absurdist comedy as at ambles from one minor catastrophe in the great artist's life to the next. There's a great comedy to be made about what a screw-up Van Gogh was.
When I interviewed Bluewater Publisher Darren Davis last spring, he specifically mentioned this set of books as something that he was really proud to publish, as a collection of material that he felt could help change the reputation of Bluewater and show that his company could publish prestigious works. Unfortunately, for me my frustrations with the translations make these books a near miss. It's a shame because one good edit pass over the text of these books would have really made them close to the products that Davis believed they could be.

Daniel Elkin: I'm totally with you on that, Sacks. How hard would it have been for someone at Bluewater to have proofed these things before they printed them? These mistakes speak volumes about the professionalism that constantly seems to be eluding this company, as well as the source of so much of the negative press often aimed in its direction. It's almost as if Bluewater just didn't give a shit, and, if that is true, then why should I?
This is a shame, too, because it's really a missed opportunity. I think that Willi Bloess does a pretty nice job providing the stories behind our idolatry of these artists with these books. I could see them being sold in museum gift shops, stocked on library shelves, or part of a teacher's curriculum. They do a good job of bringing these great artists to life, warts and all.  The Warhol one is totally "whacka," which is how I like my Warhol (Whacka Warhol), the Picasso one almost seemed to be written as a war between the man and his art, and the Dali comic fascinated me as it made me giggle.
I would be remiss if I didn't point out that while these books are dandy in providing biographical information about it each artist and contextual information about the times in which they lived, they suffer a bit from not showing the actual art each artist produced. Maybe it was a licensing issue or something, but a book about an artist that does not provide examples of that artist's art is like a recording of an interview with a musician without playing any of his or her music -- it's possible, it could be interesting, but ultimately it seems to me that it lessens some of the impact of the piece.

Shawn: That's really the problem I have with the art as well. It goes towards approximating the different styles of each of the six artists, but not far enough in most cases. The Van Gogh book is very drab, reflecting more the artist's sad life circumstance than his vibrant art. The Salvador Dali volume has a definite funny approach to the silly excesses of Surrealism, but the English reads like it was translated from Spanish to Dutch resulting in some very awkward syntax that surely can't be the way Europeans speak. The Picasso seems to have been edited much more thoroughly, and is actually visually successful as well. The extremely linear style used by Bloess has nothing to do with Picasso or Cubism, but it's consistent and serves to tell the story of the artist's creative progress through the demi-monde of the Paris avant-garde. I agree with both of you, there's so much potential here, but it's not fulfilled.