Review -- A CONTRACT WITH GOD 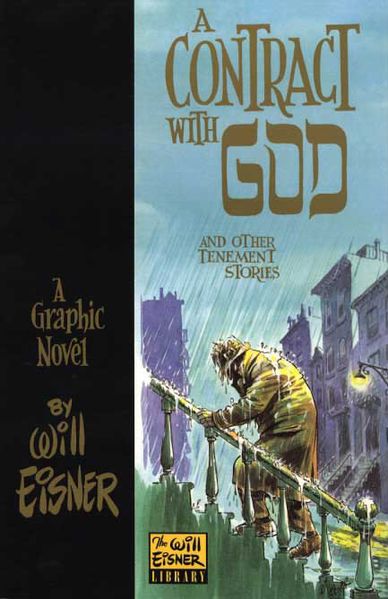 Meyers: The immigrant experience. The American dream. The promise of prosperity, of health and of joy. Believing we are more than stardust, more than motes in God’s eye. Will Eisner’s A Contract with God, in its simplicity, peels back the layers of what it means to be human, how we perceive each other and how we foolishly think we can negotiate our existence with the infinite. The story is more than a man who thinks he can strike a deal with God, it’s about how we as humans strive to find meaning and understanding in the randomness of life, that there must be a reason for all this and to mold order out of chaos.
Elkin: Order out of chaos, indeed, Meyers. That's the very purpose of faith, isn't it? Faith is the eternal optimism, the hope we swaddle ourselves in, tight, against the seemingly meaningless horrors and disappointments that we encounter on a daily basis. We imbue our rational nature with the sense that there must be a REASON behind the knives that buffet our eyes and tear at our soul.
But it's a fool's game. We are either never privy to the workings of the infinite, or just deluding ourselves to purpose.
Eisner's Contract with God, is, at its very essence, that story. It is a tale of the trials of faith in a brutal world, what happens when we abandon faith and try to get it back, the futility of associating how we live our lives to the rewards we garner and the defeats we suffer. A Contract with God is cynical in this regard, and, in its cynicism, tells the larger story of human endeavor.

Sacks: I've been living with this graphic novel for almost three decades now, and I never cease to be impressed by the endless ability for this book to surprise, by the magisterial and insightful creativity in the book, and the thoughtful exploration of its tremendously resonant themes and concepts.
For those of you who know nothing of this book, A Contract with God was the first graphic novel to be actually published as a graphic novel. Written by the great Will Eisner as his return to the industry that he left decades before – yes, the same man that the Eisner awards were named for – this collection of four short stories was first published in 1978 as a kind of experiment by the acclaimed creator. As we discover in Eisner's 2004 introduction to this book, Eisner used this book as kind of an experiment at expanding the parameters of the comics form, at creating works of comics art that told truly adult stories, stories of real life or that could have come from real life. They were tales of tragedies and mundaneness, Grand Guignol and ordinary observations.
Today, we think nothing of finding books like this at our local comic shop. But in 1978, a graphic novel that focused on the ordinary nature of everyday life was completely unheard of. In the era when it was widely believed that comics were dying, that kids no longer cared about the increasingly dull creations that Marvel and DC were inflicting on their ever diminishing group of readers, Will Eisner took a big risk.
Eisner took his time and his prestige and his well-known name and chose to lead the way towards a new world, a world where comics not only survived but thrived – not by pandering to readers but by embracing a world of readers who had no idea that they would find merit in this most despised of all artforms. A Contract with God is important not just for itself, not just for the magnificent storytelling and fascinating stories that Eisner tells in this book – though we'll get to those a bit lower down in this shared essay.
No, A Contract with God is important for what it meant for this artform. Eisner was the trailblazer and Eisner was the man who led the way. Yes, there were some amazing comics related material released all around the world in that era – from Japan to Argentina to France and Belgium and many points in between. But precious few great creations were coming from the United States. Comics were on their death's bed.
But Eisner took a chance.
Eisner innovated and pushed his fellow readers along. Maybe we would have gotten RAW and Love and Rockets and How to Commit Suicide in South Africa and Jack Survives and so many other early graphic novels without Eisner. Heaven knows that Don McGregor and Paul Gulacy would still have created Sabre, the first comic-shop graphic novel without Eisner, and Stan Lee and Jack Kirby weren't looking at their friend Eisner when they produced their Silver Surfer graphic novel in '78. But Sabre, for all its insight and passion and brilliance was an action book. Fans flipping through the oversized book would find guns and sex and a hero who looked like Jimi Hendrix. It was a weird comic book, but it was a comic book nonetheless.
A Contract with God and Other Tenement Stories, to use the book's full title, is a collection of four short stories that don't feel like comic stories. The stories are told in large panels, a handful to each page, each illustrated by Eisner at his most empathetic and thoughtful. As is always true with Eisner, especially in his period after he returns to comics, Eisner draws all his figures like actors on the Yiddish stage, all exaggerated movements and grand gestures, always playing to the back row of a crowded theatre in East New York. But he does so with such great conviction, such commitment to getting every line correct and adding heft and realism to the people that he depicts, that these characters seem real.
No, actually, they don't seem real. They seem more than real. They seem iconic. They live outside their own skin. They grow in the reader's mind as we watch them progress through their stories because Eisner has such a keen eye for the perfectly realized emotion.
We see that emotion first with the story of Frimme Hersh as he deals with one of the greatest pains that any parent can feel; namely, the loss of a child. As "A Contract with God" opens, readers are confronted with an opening as grand and operatic as you might find in any medium: beaten and crushed by his immense sorrow, Hersh meanders home on one of the rainiest days in the history of New York. Puddles seem like lakes, Hersh's surroundings seem to echo the absolute desolation that our protagonist feels deep in his soul, as we follow the man into his apartment.
As we learn Frimme's story and watch his life pass before his eyes, we see that our protagonist has been a good man, a man sent from Russia to escape the Pogroms against the Jews who has lived his life in a moral way. But with the death of Frimme's daughter, his contract with God to be a just man is in tatters: "If God requires that men honor their agreements … then is not God, also, so obligated?"
It’s hard to imagine the revolutionary impact of a story like this in 1978. In a time period when boring mediocrity seemed to fill the comic rack and precious few comics were ever found in real bookstores, a story like this had to feel like the vanguard of a revolution – a revolution that, 35 years later, has actually occurred.
This story and the other four felt fresh and resonant to me, hardly dated in form or style. What do you guys say about these stories?

Meyers: Up until two weeks ago my only exposure to Eisner was some random strips of "The Spirit" I have in one of the reprint collections. While I appreciated "The Spirit" for the time it was written in, the quality of the artwork, and its cultural significance, the stories didn’t do much for me and felt dated. When I picked up Contract, I didn’t know what to expect. From page one, I knew this was something important, something new, something different. The art is complex, clean and emotionally engaging. It’s on the verge of feeling like a cartoon just to the point where it enhances the emotion he evokes in the characters, while never crossing the line into the absurd.
What stood out for me the most is the use of stereotype in these stories. Eisner is somehow able to take the stereotypes held for ethnic and economic classes and use them not to divide, but to recognize the humanity in us all. He shines a light on the common human experience. His characters are both superficial and deep reservoirs of emotional complexity.
Sacks, you mention the "realized emotion" in Eisner’s characters. That’s what was so powerful for me. These are not "real" people in these stories, yet they are. Their embellished actions, their movements, even the backgrounds in the panels are all larger than life. In doing so, he makes them real.
Reading this book left me pondering big topics: God, religion, community and prosperity. It’s a book that still holds as much power today as it did when it was first published. I see in many modern graphic novels writers using the techniques created in this book. This is a primer for what we now call the modern graphic novel. Aside from technically how it’s important to this genere of literature, it’s a masterpiece, and a great story. The art is stunning and enthralling. It’s everything a graphic novel should be.
Elkin: Because it's storytelling, isn't it? As Eisner himself said, "This book contains stories drawn from the endless flow of happenings characteristic of city life. Some are true. Some could be true." The stories Eisner evokes of Dropsie Avenue, though lost in time, are tales for all ages. Alcoholism, abuse, perversion, manipulation, faith, hopes, dreams, growing up – though Eisner's tales are located in a specific time and a specific place among a specific group of people, there is a universality to the pathos and the longing and the depravity to which we can all relate.
And there are true horrors in A Contract with God. From child abuse to rape, from sexual deviancy to revenge, with his pen Eisner holds up a mirror to our faces and the reflection therein is not one we are comfortable seeing.
Still, though, even in that universality of theme, what is especially powerful for me about this book is that Eisner is talking about my history. My family had its American Dream carved on the streets of the Bronx, living in tenements, beholden to the Super, cascaded upon by the promise of a better life that this country foisted upon them. And the story of those experiences have slowly dissipated: the photos are lost, the memories are subsumed by dementia, the conversations around the table have turned to other topics. If anything, sharing A Contract with God with my son is an access to a past I have little handle on. It spurs questions that I no longer ask and puts a foot into his past from which he can balance himself in the present.

Sacks: The past comes alive vividly in Eisner's brilliant graphic novel. It's an extremely smart and well-considered short story collection that deepens and provides context for the American immigrant experience. While we may all be far away from the events that Eisner depicts in this book, he brings them to such vivid light, with such empathy and passion and storytelling genius, that he compels us to empathize with these men and women from so long ago.
Re-reading this book after all these years confirmed that young Jason was right: this is a brilliant, brilliant book.