May 11, 2011 – paid 50 cents for:
WELCOME BACK, KOTTER #4
Published by DC Comics
Written by: Mark Evanier
Art by: Ric Estrada and Bob Oksner 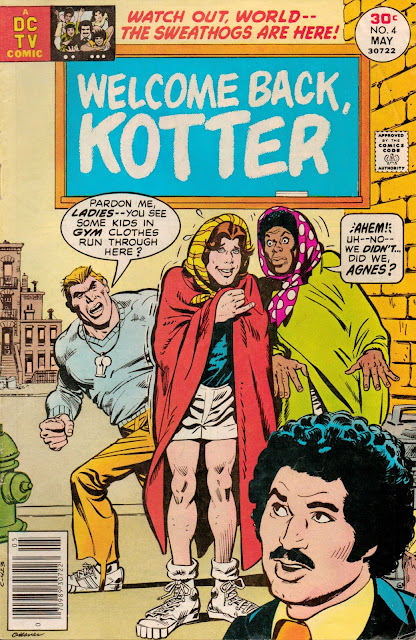 SOMETIMES, WHEN YOU WIN, YOU WIN…
SOMETIMES, WHEN YOU LOSE, YOU WIN…
May of 1977 was all about Star Wars, but you have to remember that this was also the time that George Willing from Queens, NY climbed the South Tower of the World Trade Center in 3.5 hours, A.J. Foyt won his unprecedented (at the time) fourth Indianapolis 500, Smokey and the Bandit also came out in theatres, Hotel California cemented the Eagles a place in Rock and Roll history, and Patty Hearst was let out of jail.

May 1977 also saw the release of Welcome Back, Kotter #4 from DC comics. With this act, all became right in the world for a brief, shining moment as we all reached a heretofore unknown state of enlightenment.

For those of you who have no idea what Welcome Back, Kotter is, it was a smash TV show at the time. It featured Gabe Kaplan playing Gabe Kotter, a social studies teacher at James Buchanan High in Brooklyn, New York. He seemed to only teach one class, and that class was made up of what were known as The Sweathogs, Vinnie Barbarino (played by a pre-Saturday Night Fever John Travolta), Arnold Horshack, Freddy “Boom Boom” Washington, and Juan Luis Pedro Philippo DeHuevos Epstein. The Sweathogs were remedial students on a track to failure, and Mr. Kotter was the teacher who inspired them to be more than washouts.

As you can tell from that explanation, this plot is ripe for a comic book interpretation…

At least they let Mark Evanier, a writer for the show, write the comic. The comic lasted for ten issues. I pulled issue number four out of the bargain bin.

Issue four of Welcome Back, Kotter begins with Mr. Kotter rushing out the door to get to his job.

I always wondered how Kotter got himself such a hot wife. I gather from this scene that it had something to do with his sense of humor. Gabe Kaplan remains an inspiration for all nerdy but funny Jewish boys hoping to someday get themselves a hot shiksa wife.

While Kotter is telling his hot shiksa wife this joke, Arnold Horshack bursts into the Kotter apartment and hides under the sofa. The reason Horshack is hiding? 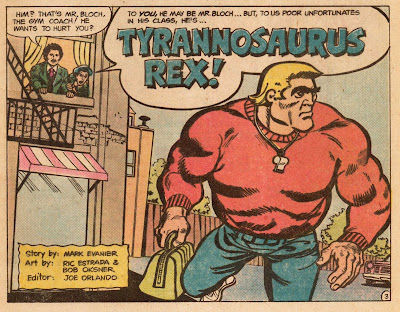 That’s right, he’s hiding from the gym teacher, Mr. Bloch, a.k.a. Tyrannosaurus Rex (why this sobriquet is applied to Mr. Block is never explained).

All the Sweathogs live in fear of Mr. Block, and go to great lengths to avoid his class. Barbarino and Washington even resort to cross-dressing, 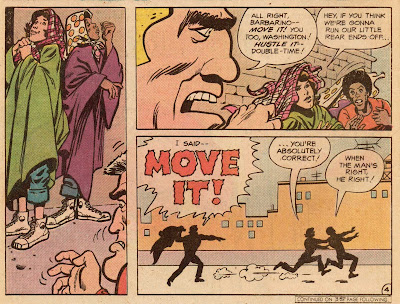 but to no avail.

The Sweathogs hate Mr. Bloch because apparently he is a clichéd PE teacher sadist who believes that only through enormous physical exertion at a truly dangerous level will a young boy become a man. Bloch is quite defensive of this philosophy as well , to the point of denigrating Kotter’s class as “social studies garbage.”

Kotter is understandably concerned for the health and well-being of his students, so he complains to Principal Woodman about Bloch’s choice of pedogogy. 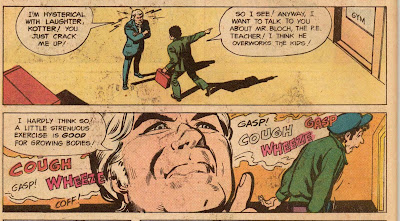 Apparently, though, Woodman is cut from the same sadistic cloth as Bloch, and Kotter’s concerns fall on deaf ears.

The next scene takes place within the confines of Kotter’s classroom where Horshack, Washington, and Barbarino are physically demoralized to the extent that even Bambi, Barbarino’s girlfriend, is beginning to consider breaking up with him due to his inability to perform physically on their dates due to exhaustion.

Epstein, though, is spared this physical torture. He has a note, which Barbarino reads. 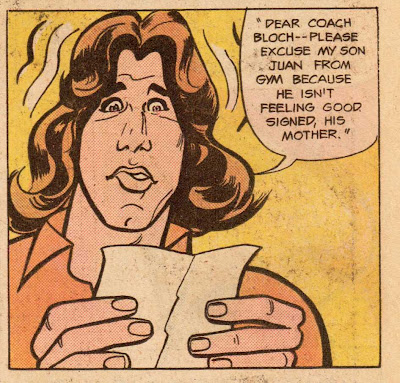 This was a running gag on the show. People thought it was very funny in 1977.

Kotter has had enough of his student’s exhaustion taking away from their ability to concentrate and learn in his class. He leaves his classroom unattended (because you could do that in 1977) and goes to the gym to confront Bloch.

While there, we get this heartwarming scene: 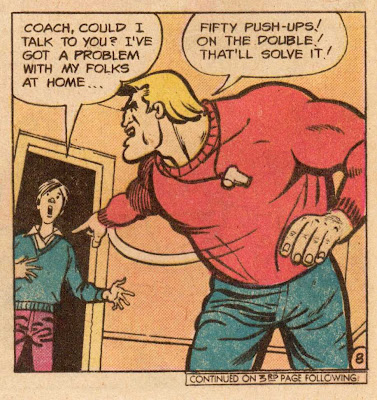 Why this student would go to Bloch with his family problems in the first place is anyone’s guess, but Bloch really shows his incapacity for empathy in this scene, making him even more the villain than before.

Finally, Kotter and Bloch agree to a foot race to see who is more physically fit, because these sorts of things happened all the time in 1977.

The next day, Kotter shows up ready to race. 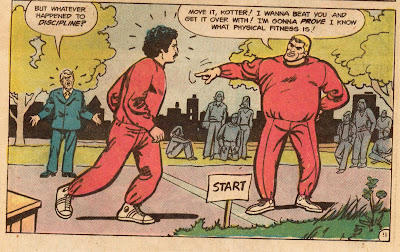 He feels surprisingly positive about his chances of success; however, the Sweathogs, being the gritty street punks they are, want to make sure that Kotter wins the race.

So, much like Dick Dastardly in a Hanna-Barbera cartoon (although that was more late 60’s than 70’s), they come up with all sorts of hijinks to keep Bloch from success.

These range from Horshack donning a beard and carrying groceries to block Bloch, 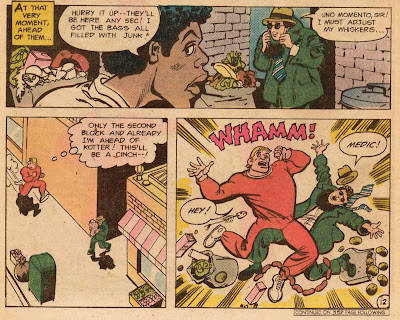 to Epstein faking a detour into a backyard full of angry dogs, to Barbarino dropping a purse in Bloch’s hands and yelling at a cop that Bloch just stole the purse. Once again, this was comedy gold in 1977.

Still, Bloch proves too fast for Kotter, but as he is about to overtake the lead once more he slips on what appears to be either a corn chip or dog vomit. 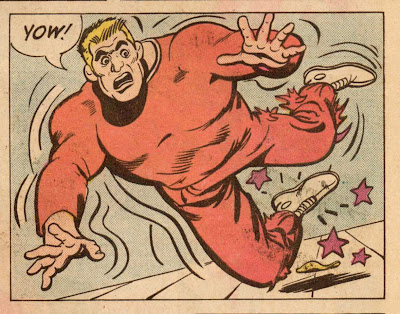 This results in Bloch twisting his ankle and being unable to continue the race.

Mr. Kotter takes this opportunity to show that he is the better man, and in a true altruistic act he helps Bloch to his feet. While walking together, Bloch reveals to Kotter the extent of his pathos, while Kotter, empathetic to a fault, gives Bloch the opportunity to still win the race. 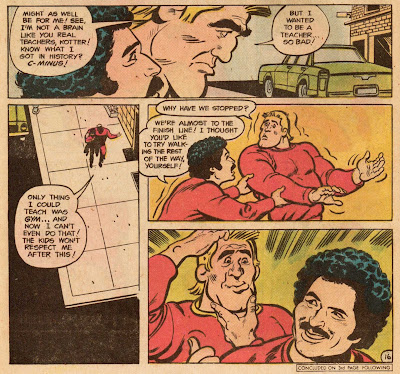 In these four panels, Bloch explains his motivations for his sadistic streak, experiences satori, and is a forever changed man.

Gabe Kotter is the Buddha. Just look at that bodhisattva smirk in that final panel above.

So Bloch crosses the finish line first, but it is Kotter who really wins the race. 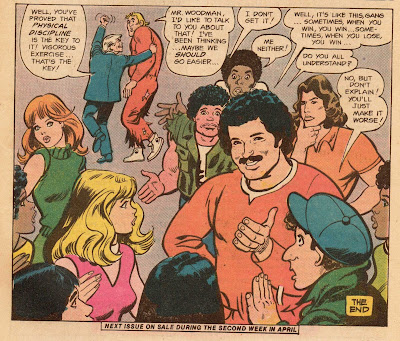 Kotter’s koan at the end should serve as a lesson to us all.

“Sometimes when you win, you win… Sometimes, when you lose, you win …”

Was this comic worth the two bits? Look at it this way, I could have spent ten-thousand times that amount for a weekend Buddhist retreat in the mountains some place and only reached half the enlightenment I reached from reading Welcome Back, Kotter #4. Not only that, but it was at least attempting to be funny at times, and it was consistently disparaging towards PE teachers. What’s not to like?

I just wish there were more panels devoted to Mrs. Kotter.

Anyway, Welcome Back, Kotter #4 was a nice welcome back to a time in my childhood I had long repressed.

Oh, and if you don’t agree with me about Welcome Back, Kotter, then “Up your nose with a rubber hose!”