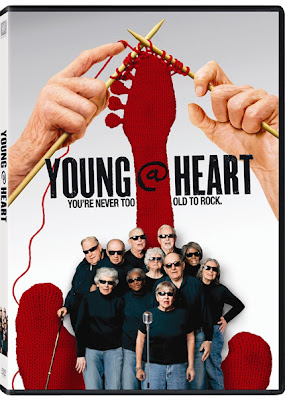 Young@Heart follows the Young@Heart Chorus, a world-wide traveling choral group composed of seniors (average age is 81) led by Bob Cilman, as they prepare for a concert in their hometown of Northampton, MA.

What makes this choral group different than other senior groups is that they re-imagine classic rock and indie songs from the likes of The Clash, The Talking Heads, Sonic Youth, Bob Dylan, and others, in a way that, given the context of the performers, creates a new dynamic and thematic magnitude for these songs. 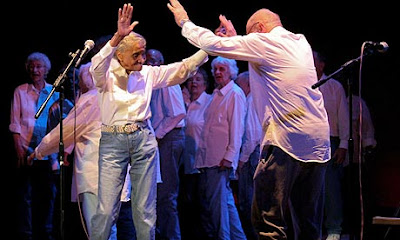 The documentary is about the group as they go through rehearsals in preparation for a concert in their hometown of Northampton. It focuses Bob Cilman, the group’s director, as well as about four or five of the group members, telling their stories and giving them a chance to let their personalities shine. It shows the challenges they face as both members of the chorus, as well as being senior citizens, and it does so in a way that is engaging and, to a degree, reverential. 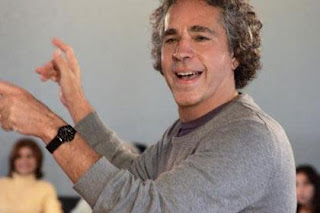 Director Stephen Walker is a big presence in the film, both as a character and a narrator in the film. Normally, I am not a big fan of documentaries that necessitate the director playing this kind of role. I prefer documentaries that let the stories and the personalities involved unfold on their own which allows the audience to make a stronger connection with the film, but in this case, while Walker is a bit annoying, the people he is interviewing and the performances they goive push him so far into the background that his presence doesn’t detract as much as it could.

The tone of the documentary is celebratory for the most part. The enthusiasm of the members of the chorus and obvious love of what they are doing really holds the film together. There are some difficult parts to film though. This is a group of individuals who are at the end of their life, and the complications and realities of this are unavoidable. The film does not shy away from this aspect, and it does get a little heavy-handed in parts, but the movie is all about celebration, especially the celebration of life. 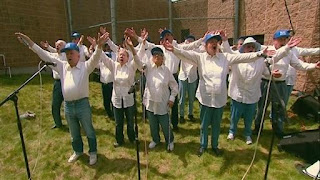 One of the best scenes in the movie is when the group goes to perform at a local prison. They chose to cover Bob Dylan’s “Forever Young” as part of their show. The juxtaposition of watching the older chorus sing this song and bring to it the reverberations from that reality, to the faces of the young prisoners as they hear the words and the connotations that it brings to them as they hear it, is an incredible piece of film work. The depth and the layers of meaning this scene allowed to occur really stuck with me.

This documentary does carry with it a certain kitsch factor, and the novelty aspect of the situation does drive the film to a certain degree. Of particular annoyance to me was the decision on the part of the filmmakers to include some “music videos” of the group covering some songs. But when Stephan Walker steps back and allows the movie to be a documentary, it is a beautiful thing to watch.

We live in a society where our elderly and infirmed are often shuffled off to the side as almost something we are ashamed of. Young @ Heart does a great job of showing the possibilities of what can happen when we ignore this idea, both for the seniors and for ourselves.

Young @ Heart is full of life. Life is something we often take for granted or don’t appreciate until something horrible happens. This documentary should remind you that life is really for celebration.